“Waitress” at the Ordway 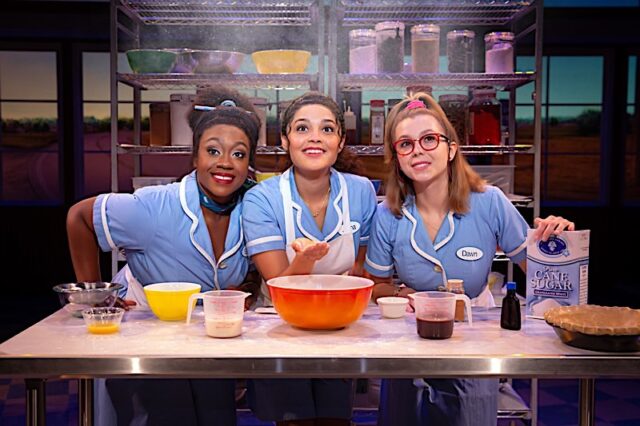 Since it opened on Broadway in April 2016, Waitress became an instant hit. With lyrics and music by Grammy Award winner Sara Bareilles, an all-female creative team and a stellar cast, it was bound to be great. I knew something about this show was special when it was nominated for four Tony Awards, won none of them and yet it still became one of the longest-running shows in recent Broadway history with more than 1500 performances. It quickly became a cult classic for many theatre and non-theatre fans and now it’s running at the Ordway Center for the Performing Arts in St. Paul, Minnesota.

Waitress tells the story of Jenna, a waitress at a local diner in a small town. She is known for making countless incredible pies, fresh, each day for the diner. Her two best friends, Becky and Dawn, work with her and are her biggest supporters. While Jenna dreams of getting out of her loveless and abusive marriage, she discovers that she is pregnant. A pie baking contest with a large prize and the town’s new doctor give Jenna a glimmer of light to push through her pregnancy and offer the chance at a fresh start. She slowly starts an affair with him but soon must summon the strength and courage to rebuild her own life and finally put herself, and her soon to be child, first.

The story is actually based on a 2007 movie starring Keri Russell and it translates to the stage beautifully. At the heart of it we have a woman who is struggling to get by in various aspects of her life but her two best friends are as well. Each woman is going through a similar phase in life but from a different perspective. We have Jenna who is pregnant and feels trapped in an abusive relationship and begins to have an affair. We have Dawn who is just trying to find love in general before getting too scared. And we have Becky who is in a relationship with her husband, whom she loves, but she misses the passion and begins to have an affair with Cal, the diner manager.

All three of them go through a really lovely journey throughout the whole show. Each story also ladders up to the overall theme of the show which can be described as what do you do when you’re not happy enough. Where is the line between happy, unhappy and just not happy enough. They have their flaws but they do take life into their own hands whether you agree with their decisions or not. At one moment there is a funny scene in which all three women are having sex and Dawn and her husband are dressed up in period clothing as they both are fans of Revolutionary War renactments. Dawn plays Betsy Ross, who is credited for making the first American Flag. As the scene ended, Dawn held up her finger to have us wait a moment before revealing the flag she was holding was the LGBTQ+ flag. The audience roared in applause and I can’t help but wonder if this was a statement in solidarity with queer youth and a statement against the horrendous “Don’t Say Gay” bill and that just passed in Florida. It was quick and powerful and I loved every minute of it.

Each of these actresses approach each character from such a sense of realism but never losing sight at the world in which the musical lives. Waitress does have some pretty upsetting but slice of life moments. Sometimes we don’t always get a happy ending or sometimes we have to find it ourselves in unconventional ways.

I thoroughly enjoyed pretty much everyone’s performances. Gabriella Marzetta, who plays Dawn, is fantastic. She’s quirky and funny but never goes too overboard with it. It’s always just the right amount. Dominique Kent, who plays Becky, is honestly the heart and soul of the production. Her character I wish we got to explore more honestly because I think there is so much more that we don’t get to see. But Kent still helps push the show along with her phenomenal vocals and impeccable comedic timing

Our leading lady is Jisel Soleil Ayon who plays Jenna really is a stand out performer in her own right. Ayon is able to emote on such an incredible level. Jenna is a difficult role in musical theatre not only for some of the songs but the character in general. She is a very guarded and protected person however when Dr. Pomatter comes, her layers slowly peel back. Ayon does this beautifully. She doesn’t rush Jenna’s journey too much. She also had me in tears during the show’s 11 o’clock number “She Used to be Mine” in which Jenna is singing about how her life isn’t where she thought it would be in this moment of time.

David Socolar plays the role of Dr. Pomatter and is really perfectly cast. He’s great a lovely tenor voice and what I love a lot about this role is that it doesn’t fall into the typical trope we see for a leading man. He isn’t suave, sophisticated and mysterious. He’s clumsy, nerdy, and funny and that’s refreshing to see!

What really makes this show stick out from the rest of what we’ve seen on Broadway in the last decade or so is the music. Bareilles is not only a great vocalist but an extremely talented song-writer. Not every artist can go from writing Grammy winning albums to musicals. The ability to tell a story through a theatre lense is so vastly different but Bareilles makes it look like she’s been doing it all her life. Her ability to craft a story through not only the entire songbook but even singular songs is masterful.  Also she has such a unique sound when it comes to her music and it is something so fresh that not many shows have these days. Not every single song needs to be a big huge jazz hands number.

I was so excited to see this show for the second time. Everything from the themes, to the writing, to the music is so well written that I can’t help but want to see it again. It’s here only till the end of the weekend so I encourage you to get your tickets as soon as possible because there is no telling when it’ll be back. And yes, I will be making pie this weekend now because I’m in the mood for it.

Tickets can be purchased at www.Ordway.org.