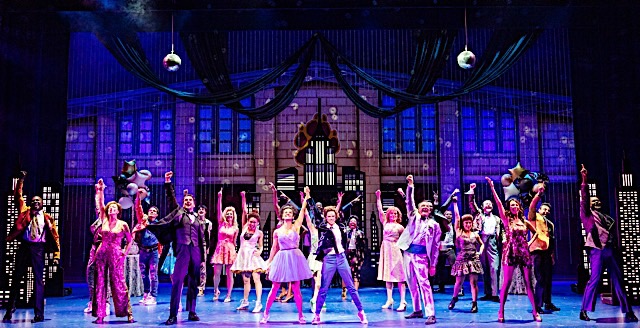 In 2010, a young woman by the name of Constance McMillen was a senior at a high school in Mississippi. After deciding she would bring her girlfriend to her senior prom, the school board banned her from attending. After she challenged the board’s decision, the school board cancelled the prom entirely. It was after that the ACLU sued the school district; however the judge did not force the school to reinstate the prom.

This was the story that the Broadway musical The Prom is loosely based on. In this show, we meet a group of Broadway actors who have been labeled as extreme narcissists. After their recent endeavor on Broadway opens and closes in one night, they come up with a plan to improve their image which leads them to want to take up a cause. After searching on Twitter, they find Emma, a teenager form Indiana whose prom was cancelled by the PTA because she wanted to bring her girlfriend. They decide to venture to Indiana to bring more attention to this cause and help Emma.

It’s always exciting seeing a new musical come that isn’t based on a movie, or another play. While this one is rooted in a real story, it’s completely fresh and new. The show was even made into a Netflix movie featuring Meryl Streep and now Academy Award Winner Ariana Debose…although I recommend you see the musical instead. It’s way better. The show starts with a very typical Broadway flashy opening with music that feels glitzy and mirrors the older generation of actors that the show starts with. While the music harks back to a different time, the story is modern and fresh.

The great thing about the writing of this show as well is that it really is for anyone. Whether you’re a theatre fan or not, there is something for pretty much everyone. If you’re just a fan of musicals, there are fantastic songs and great dancing. If you’re a deep dive theatre fan, there are a lot of lines that feel very meta and almost break the fourth wall. These moments and influences make the show feel contemporary without it being pandering to a specific audience.

The acting by everyone is top notch. There isn’t a weak person in the cast, at all. Everyone is spot on with their entire performance from curtain up to standing ovation. Kaden Kearney plays Emma and they are able to make Emma so relatable whether you’re queer or not, which is important for this show. Kalyn West plays Alyssa and shows the struggles that West is going through when you have societal and family pressure weighing you down.

The one who really sparkles the brightest out of everyone is Courtney Balan, who plays Dee Dee Allen. Dee Dee is the epitome of a narcissist actress who believes she can get anything by flashing one of her two Tony’s or giving her name. This character is instantly one that I gravitated towards because of her energizing personality that Balan gives her. Dee Dee also has some of the best songs and dialogue. While a character like this can get old very fast by the second Act, Balan never goes too far over the top where it becomes unbearable. She keeps Dee Dee grounded…even when she’s belting her face off.

There is a lot to unpack with this show. One thing specifically is that while stories about coming out are still extremely important still in this day in age, this one is very different from what we normally see. Typically we see a lot of these stories in media revolve around two gay boys and it focuses on the one who is maybe still not out. With The Prom they flip that on its head and it is about two young women and the focus is more on the one who is dealing with the aftermath of coming out.

The character Barry Glickman is one I want to call attention to as well. Patrick Wetzel plays Glickman wonderfully and with a heart of gold. While his character is also completely full of himself, he really does bring a genuine soul to the show. However there needs to be something said about the character. Barry is over the top, feminine and sparkles like a million stage lights and that’s ok. While I know many will possibly reject the idea of Barry’s character as a stereotype, his character is still extremely valid. Yes, not all gay men are like Barry, but there are many who are, including myself. We exist and deserve to be represented in theatre just as much as muscular gay men are in TV and movie.

While it deals with some harder themes including bullying and family abandonment, The Prom is a feel-good story the celebrates individuality, young queer love and performing selfless acts. It’s a lovely story and I can’t wait to start seeing it produced in smaller theatres so that its message of acceptance can flourish throughout the country.

The Prom is at the Orpheum Theatre now through April 17. Tickets can be purchased here.