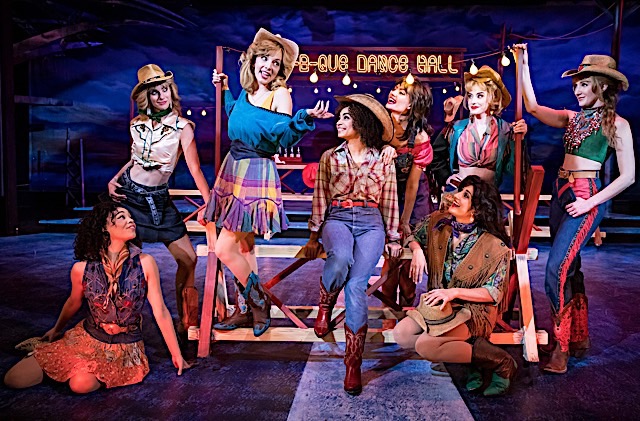 The Chanhassen Dinner Theatre is known around the state as one of the best dinner theatres around. The talent they attract is simply some of the best and unparalleled and their recent show Footloose is no exception to that. However after seeing this production, I can’t help but think what else could they do if they picked a more risky show?  While I adore Chanhassen, they consistently pick shows that feel safe.

Footloose is a story that every generation knows one way or another. Whether you’ve watched the original movie, a recent adaptation or your favorite theatre producing it, we all know Footloose. When a young teenager, Ren, moves from city living in Chicago to a small farm town, he’s prepared for the inevitable adjustment period at his new high school. However, he isn’t prepared for the strict rules that this town has set by the local preacher, which includes a ban on dancing. When Ren meets Ariel, the rebellious daughter of the preacher, he soon realizes maybe this town isn’t so bad…yet.

The show begins with an explosion of vocals, color and dancing with the titular song. Renee Guittar choreographed an incredible show. Each routine is organized, sharp and exact which should be noted that it isn’t easy to do this on a smaller stage, however they always deliver. One scene included some incredible basketball choreography that was so smooth and looked effortless by the cast. It’s unfortunate there aren’t more opportunities for dancing because Guittar is a genius and the cast translates it wonderfully.

In addition to the choreography, one thing I always notice about each show I see at Chanhassen is how they use their space so well. Their ability to utilize vertical levels and their push on set pieces are always interesting to see. While the stage is small, that calls for building up; however the ceiling is fairly low as well because it’s a dinner theater. There are almost always a few platforms that allow actors to be up higher, causing more dimension to certain scenes. The set pieces were also unique and well done including the gas station, motorcycle and Burger joint tables.

There certainly is an abundance of talent in this cast. As an ensemble in acting, many of them stand out in their own way however sometimes they stick out a bit too much. I found that in many of the ensemble numbers it felt like some performer’s voices weren’t blending as well and stuck out too much. The only time I didn’t feel this was during the smaller group numbers that included Rusty, Urleen, and Wendy Jo (Shinah Hey, Kayli Lucas, Maureen Sherman-Mendez). The songs like Holding Out for a Hero and Somebody’s Eyes highlighted these ladies incredible vocals.

Ann Michels and Michael Gruber both return to Chanhassen playing Ethel (Ren’s mom) and Rev. Shaw Moore, after both co-starring in The Music Man last year. Both of these performers never miss no matter the stage and no matter the role. It’s a treat to watch. Lynnea Doublette is fantastic as Moore’s wife, VI and I wish she had a larger role due to her pure demeanor and lovely singing. Another highlight includes Kersten Rodau who hilariously plays Betty Blast and had me rolling with laughter.

Alan Bach and Maya Richardson both lead the production as Ren McCormack and Ariel Moore, respectively. Bach is able to play Ren as a suave young teenager without looking like he’s trying too hard. His impressive ability to dance and hit each singing note without losing too much vocal integrity is great as well. Richardson brings a new flair to the role of Ariel that I’ve never seen before. She truly makes Ariel her own. Together, their performance of Almost Paradise creates the most touching part and best vocal part of the show.

As I mentioned, the skill in this cast is great, however there is no show without Willard and Rusty, played by Shinah Hey and Matthew Hall. These two on their own are incredibly captivating to watch and together they are even better. Hey has this wonderful ’80s flair to her voice that makes it feel so authentic to the show. Their chemistry as awkward teenagers in love is a joy to watch. Hall is a total scene stealer without pulling the attention too much.

The Chanhassen is back and Footloose is a perfect night out. While it’s not my favorite show in general, the production itself holds up and is great for families, groups of friends or anyone who just wants to get out of the house. Not to mention the dinners at Chanhassen are always top notch!

Footloose runs now through September 24, 2022. Tickets can be found at chanhassendt.com/footloose.