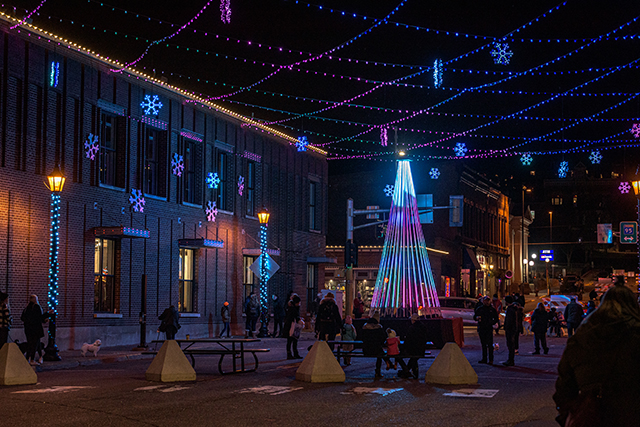 Stillwater is a magical place. It’s one of those Midwestern towns bustling with tourists but still manages to maintain its magnetic charm—like Lanesboro to the south, like Mackinac Island in Michigan or Stockholm in Wisconsin. Because there’s a rich history to these places, a culture preserved. And like those other towns, Stillwater becomes a different place depending on the season.

Also, the Birthplace of Minnesota offers a kaleidoscope of year-round activities.

The only conceivable problem with visiting Stillwater is editing your itinerary into a manageable weekend—there’s too much to see and do. I visit on a Thursday in late October. It’s the perfect fall day: chilly, sunny, trees on the Wisconsin side of the St. Croix crowding around Houlton like a flannel blanket. The breezy 20-minute drive from Saint Paul is even quicker than I remember.

First stop: Bundle up and hoof it across the historic lift bridge, make landfall in Wisconsin about a thousand feet away, double back. The bridge was constructed back in 1931, with various rehabilitation projects spanning the 2000s. It’s an easy walk, with dramatic 360° views. Back in Minnesota, I take a leisurely stroll along the Stillwater riverfront. As I observe downtown and the gorgeous historic homes climbing the bluffs beyond—the spires and copulas, the decorative friezes and pediments—certain abstractions sort of ricochet inside my head: fairytale, storybook, postcard, romantic. But timeless, really, is the fixed variable here.

These qualities are some of Stillwater’s most compelling draws, or, according to Christie Rosckes, Marketing Director for Discover Stillwater, “the beauty and feeling that you’re a world away when you’re only 30 minutes from Minneapolis. Of course, exploring your way through Main Street’s culinary scene is a major draw as well. We have so much to eat and drink with our 20+ locally owned establishments—from ice cream shops to new distilleries to fabulous patios to fine restaurants and fun nightlife.”

She adds: “It’s no surprise that Stillwater was named one of the 10 Best Small Town Food Scenes in the country by USA Today Travel.”

There’s a dreamlike quality to this place; not so much that time seems to stand still, but that it ceases to exist.

I decide on lunch at Stillwater Proper, the latest homerun project from Joe Ehlenz and Brad Nordeen—the powerhouse team behind favorites like Lolo American Kitchen and Lolito Cantina. The space is modern and welcoming, with high ceilings crisscrossed with enormous wooden beams. I post up at the zinc island bar/open kitchen, compliment one bartender’s Crystal Castles t-shirt, and order the Seared Ahi (togarashi, pickled vegetable, chile mayo) and a Mr. Miller (barreled gin, absinthe, lemon, maraschino, dry vermouth—from the menu’s “Spirit Forward, experienced drinker” section). Everything is so delicious I feel my brain light up.

Stillwater is not just known for its antiques, it’s “been the place to go in the upper Midwest since the big boom of the late ’70s and early ’80s,” says Rosckes. “Stillwater still has the largest antique mall in the Midwest with 30,000 square feet of space at Midtown Antiques,” a veritable fortress of nostalgia. But I decide to skip out on the antiques (remember Stillwater’s only conceivable problem?) because there’s just no time (though I do take a spin through Black Letter Books, and it’s dazzling). Besides, I want to experience this place like a real local might: explore the older bars, walk around, just be.

I check in at Hotel Crosby, a gem of a boutique hotel overlooking Main Street. The vibe at the Crosby sits at the intersection of classic (think supple leather and woodsmoke and whiskey—lots of whiskey; Matchstick, the lobby restaurant (and major local favorite) stocks more than 2,000 bottles of rare spirits) and hyper-modern (Edison bulbs, super-streamlined rooftop patio with enormous hot tub, all clean lines and Mid-century everything) with a wink and a nod to Stillwater’s lumber-baron past. Also, the entire staff is friendly and attentive, rounding out the entire wonderful experience.

In regards to Stillwater’s nationally lauded culinary scene: My advice is to try small plates like appetizers at as many spots as you can muster, throughout your time here. Each restaurant is an experience in itself, and the 1,500 feet between both boutique hotels flanking Main Street (Crosby and Lora) is an exciting and impossibly delicious journey into local cuisine.

Local is the operative word. You won’t find any chains down here along the river, only artful and artisanal victuals aplenty.

What next? Quick Old Fashioned at Matchstick (perfectly spiced, mellow, haunting) and I want to run from place to place, tearing down Main Street to beat the hours I thought had ground to a halt.

Quick IPA at Feller, outside around the gas firepit where people-watching is an art form, where I have a pleasant (brief) conversation with a suburban mom from Wayzata. Then a double-quick swing into Whitey’s, a downtown treasure that reminds me of home—just to see these places, to absorb the experience. I wish I’d heeded my own advice about the culinary journey down Main, but I’m not hungry and I’m low on time (I still have a haunted history tour to catch, plus axe throwing at the Lumberjack), wishing I could stop into No Neck Tony’s for an award-winning Bloody and some skee-ball, then Tilted Tiki for some Loaded Luau Fries (w/homemade pineapple pico) and a Zombie (spicy, rummy, “STRONG and delicious”). Christie Rosckes was kind enough to curate a detailed itinerary—she’s as excited about Stillwater as I am—but I’m just one man! I wish I could divide my consciousness—one of me bucking up and hiking the 5.9-mile Brown’s Creek State Trail, another swirling some 2015 Nebbiolo at Doma?in or knocking back some hazy IPAs at Lift Bridge Brewing and/or Maple Island, and yet another kicking back and enjoying my suite back at the Crosby while the rest of us put in the legwork. Everything is literally within a stone’s throw of everything else.

But that’s a lie: Outlying dining destinations beyond the sentinel boutique hotels are versatile and not to be missed (despite my missing them), including Gasthaus Bavarian Hunter up on Lofton (think Jägerschnitzel and fine pilsners), Patriots Tavern on New England Place (elevated pub fare, wood-fired pizza), Oasis Café just south of downtown proper (breakfast classics), and others. Again, I’m only one man. However, with Stillwater being so close to the Twin Cities, it’s an easy daytrip or date night to check out any spot in town.

In the warmer months of spring and summer, the bike trails sing with visitors, there are walking tours, there’s golf, camping, and too many other activities and events to list. Fall offers some of the most eye-popping leaf-peeping in the state. In the wintertime, Stillwater glitters like a shaken snow globe—it’s impossibly romantic—and it’s all horse-drawn carriage rides and fat tire biking and frozen bocce ball, before hunkering around a fire in any number of the coziest atmospheres imaginable.

“Wintertime in Stillwater is glimmering with charm,” says Rosckes. “I love the feeling of shopping during the holiday season with Victorian-dressed carolers roaming the restaurants and shops. The new lights displays downtown and the lit-up historic lift bridge are so festive, and come January when the Ice Palace and riverside ice skating rink open up, it’s a winter wonderland. There are new events too, like boot hockey, curling and an annual World Snow Sculpting Competition coming January 18th – 23rd.”

In the end, I don’t have the editorial real estate to do Stillwater justice. I could write a book on the place, and perhaps I will. But, for now, this has been a snapshot of my time there, however brief.