Saint Croix State Park & the Parable of the Two Wolves 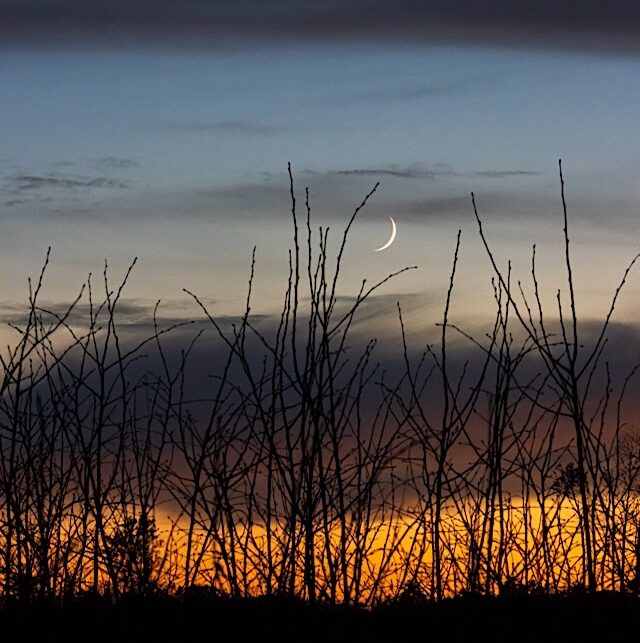 Right away, we see a wolf at close range.

I’ve just hopped in with Megan Johnsen, Minnesota State Parks and Trails Exhibit Specialist, to explore her favorite hikes. And around two corners a gray wolf crosses the road like an apparition. Megan and I snap to attention.

Two more corners and we slow to a stop for an ambivalent ruffed grouse. He cocks his head in our direction, but crosses casually, and then stops altogether. We wait it out. Then, suddenly, he sprints into the brush.

I will think about that wolf later, as I pitch my tent in nearby—and vacant tonight, in the seasonal limbo between peak fall colors and hunting season—Paint Rock Springs Campground. (It should be noted that, although wolves are big, scary apex predators, a report by the International Wolf Center assures that “there has not been a person killed by wolves in North America during the 20th century.”)

“Seeing a wolf is not a normal event,” Saint Croix State Park Manager Rick Dunkley tells me, when I later recount the story, “and many visitors would envy your sighting.”

It’s late October, partly cloudy, 50°/30°. While not winter camping, per se, it’s the coldest camping I’ve ever done. But winter is a popular time here at Saint Croix SP, which offers 80 miles of impeccably groomed snowmobile trails, 11 miles of ski trails, camping for the intrepid (winter lows can reach -16°), two modern guesthouses accommodating up to 15 people, and an enclosed (and impossibly cozy and nostalgic) shelter with two fireplaces.

First stop: the 100-foot-tall fire tower built by the Civilian Conservation Corps (CCC) back in 1937. As we climb, Megan tells the story of the park’s family legacy.

In the early 1900s, Ed and Josie St. John lived and raised their family up on the bluffs of the Yellowbanks. In 1912, the U.S. government relocated the family to a reservation 220 miles north.

A decade later, Ed and Josie’s daughter Katie, longing for home, walked back to the Yellowbanks with her baby and two sons—all 220 miles.

Katie raised her family on the banks where her parents had raised her, and in much the same way—teaching her children to understand and appreciate the land and its gifts. Her sons John and Eugene, employed by the American New Deal’s Works Progress Administration (WPA), built the park’s facilities. And, today, Katie’s great-grandson Rick—the guy I’d told about the wolf—manages the park.

This is all preserved on display at the park’s Visitor Center in the main campground complex.

The fire tower is a major attraction at Saint Croix SP, but not for the faint of heart: While the view is spectacular—we can see for miles, columns of sun hitting the valley trees like floodlights—the climb leaves me winded.

We linger for a while, and then it’s off to the Kettle River Highbanks (an easy hike, and highly recommended) and, finally, the Kettle Overlook, where we hoof it down to a pebble beach on the riverbank.

And it’s magical: totally silent but for the play of water and some echoic birdcalls high in the white and red pines. Megan and I spend most of the afternoon hiking around, talking about tree and plant species. The sun then dips below the yellow-leafed maples, and they look lit from within like Chinese lanterns.

It’s dark by the time I reach my site. I set up camp, build a fire—breathing into my hands, for warmth—and pour myself a drink in a wooden cup. Then, as has been my pattern lately, thoughts descend like a dropped brick.

When you enter into a union with another person, they welcome you—emotionally, physically—and give you the most valuable thing they’ll ever have in their life: time. What you do with that gift determines the quality of your character.

What’s wrong with you, anyway? You long for intimacy but fear it at the same time. You’ve held a normal life in your hand more than once, and you’ve crushed it like an egg.

I shake my head. A great horned owl calls out from the frigid dark.

I wake up to warbling Vs of sandhill cranes migrating south against a cloudless blue dome.

Then: quick and delicious breakfast at the packed-to-capacity Whistle Stop Café. Waitresses pirouette around each other in the compromised space behind the bar, where I’m sitting, and speak in shorthand with the line cooks.

Most of the customers order without referencing the menu, and everybody seems to be on a first-name basis.

As I sign my check, one waitress sort of stumbles against me as the woman beside me grabs a napkin and wipes her whole face.

Then it’s off to Pine City, where I meet up with Nick and Cassandra Olson at their family brewery, Three Twenty. We sit and chat for an hour, and I sample everything on the menu. The beer is exceptional—complex, multidimensional, delicious—and I’m even swayed by their seasonal Pumpkin Pie Eyed, a style I normally detest. But Three Twenty’s is perfectly spiced and balanced and incredible: the perfect fall beer.

For lunch, I cross into Wisconsin and check out a recommendation: Danbury’s Fish Bowl Bar & Grill. Most of the vehicles in the parking lot are side-by-side ATVs, and the rest are militaristic pickups with side-by-side ATVs in their truck beds. Inside, the white noise of a football game. I sit with my back to a large-screen TV, which seems to freak everybody out. There are cookies in the salad bar. The burger I order is as big as my face, and almost as big as my entire head. Afterwards, I feel like curling up on floor and passing out.

Then I decide to check out Hinckley’s Grand Casino, where I lose $40 in about six minutes.

Back in Pine City, I stop into Froggy’s Bar & Grill. I order a light domestic and sit. Eventually, two drunk women and one especially drunk woman enter in a flourish. Shots. More shots. Then a song—AC/DC’s “You Shook Me All Night Long”—activates something in the especially drunk woman, and she starts to dance around the bar, orbiting into my personal space. Then Def Leppard’s “Pour Some Sugar on Me,” Whitesnake’s “Here I Go Again.” All the hits, unfortunately, and with each subsequent song the especially drunk woman dances ever more spastically, languid in a fitful way—like a whipped bed sheet.

“Don’t you guys wanna dance?” she hollers, and grabs my shoulder. I look at her hand and it disappears.

Back at Three Twenty, I order a Pumpkin Pie Eyed and sit on the patio. The sun is setting. I allow the conversations around me to settle into the background, just vowels, rising and falling like the sounds of nesting birds.

The entrance to Saint Croix SP looks vaguely Floridian, and most leaves remaining on the stunted trees have dried to the color of old blood, brittle, about to drop, drawing into themselves like so many cupped hands. The ashen sky is slashed neon to the west—electric, otherworldly in all this oceanic gray, a glimpse of Heaven’s subtropical tip.

There are some other campers scattered around tonight, and as I build a fire I find their distant peals of laughter comforting. This sense of comfort eventually warps into loneliness, and, rather than sit with it, I hop into my car and drive to the point where I know I have cell service. I call my parents, and my father answers.

“What’s up,” he says. He’s eating something.

I pause. I can hear Fox News in the background.

He clears his throat. “What’s up.”

I want to ask, “Was your father present? Was he affectionate? Engaged? Did he encourage you? Or was he, too, violent? What kind of man did you want to be? What kind of father? What happened to you?” But I just sit and gaze into the 160-foot world created by my headlights’ pale sweep, the patchwork of fallen leaves on the road, listening to my father chew.

“Call your mother tomorrow,” he says, and hangs up.

I blink, the phone held to my ear. I wish yesterday’s wolf would wander into that pale sweep before me. I’d get out, cooing and clicking my tongue, and open the back door. He’d hop in, my car beveling under his weight, and make himself comfortable among the blankets. I’d roll him over and rub his belly. I’d kiss his forehead, and he’d lick my face, tentatively. Then we’d drive into town, where I’d feed him hotdogs and tacos—superprocessed foods so rich and caloric his brain would light up, and another reality would open its door. Then, one wolf becomes the other: craving junk, self-destruction, his warrior’s spirit swaddled beneath layers of domestic fat. Not only would he never want to leave, he wouldn’t even know where to go.

And that wolf would keep me company, forever.