Review: “Come From Away” 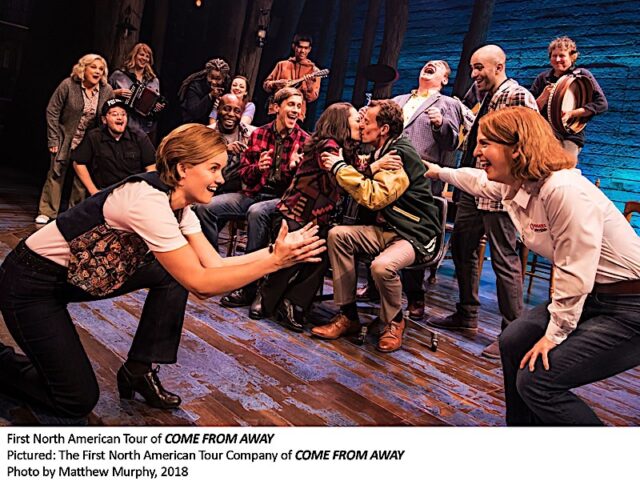 The First North American Tour Company of COME FROM AWAY. Photo by Matthew Murphy, 2018

There are numerous events in one’s life that seem like a distant memory, and yet you can remember them perfectly. They unite and bind us together—especially if it’s a catastrophic event. The question that always gets asked is “Where were you when [fill in the blank]?” On September 11th, 2001, I was in second grade. I didn’t know what was happening but I knew it wasn’t what was supposed to happen.

Come From Away tells the mostly unheard story of a group of thousands of people whose planes had to divert to various locations the morning of the September 11th attacks. Since the U.S. airspace was closed, many had to make emergency landings at Gander International Airport in a small town of Gander in Canada. It was there that the people of the surrounding small towns housed, fed and watched over thousands of stranded travelers for days.

There are a lot of particular things in this musical that really sets it apart from the rest. The music is so different than a typical Broadway musical with hints of Irish, folk and indie influences. This is music I could actually sing along to in my car. There are some incredible vocal moments, including “Me and the Sky,” which is a song by Beverly played by Becky Gulsvig—but overall many of the songs are true ensemble pieces. The music is the epitome of storytelling, truly telling everyone’s perspective in such a unique way.

The technical perspective of the show is nothing too amazing to write home about, however, the real point is that it isn’t needed. The show has such incredible music, important themes and three-dimensional characters that we don’t need to see a full airplane on stage. The important message of the show still pulls through.

What’s particularly interesting about this musical are the parallels in themes that it draws from when it comes to human nature. That is truly the biggest thing about this show that I need to write about. When we talk about Come From Away, the biggest conversation that comes through is the kindness and generosity that the citizens gave to the passengers.

However, the writing also dips into the beginning of a horrific time in America that is still a problem today, and that is the continued racism and xenophobia that is rooted into the DNA of our country. I understand the show is about hope—however, I really wish it would have dove into this a bit more because the moment in our history completely changed the way this country views immigrants and anyone who deviates from our comfortable norms. There is a scene when they’re getting ready to go back onto the planes and a flight attendant speaks with the captain on how she feels unsafe and refuses to fly because one of the passengers is from the Middle East. More than 20 years have gone by and this sort of thing is still happening in our country from airline employees and passengers alike.

Come From Away does something that not many Broadway musicals do, and that is the realistic cast that it shows. We don’t see the typical cookie-cutter six-feet-tall Broadway dancer with the chiseled body and tan skin. The cast is inspired by real people, which means we need realistic actors portraying them. When I watch this show (both when I saw it in New York and here) I see the lady who rang up my groceries at the Co-Op. I see the man who walks his dog past my window every day. It just is refreshing to see.

The last thing I want to really highlight isn’t about the show specifically but the cast. Over the last few months (it’s about time) the conversation about swings and understudies has been pushed to the forefront. These actors work tirelessly to ensure they are not only knowing their own part inside and out but sometimes two, three, or even four other parts. This show I saw featured numerous understudies and swings, which is why I want to take a second to list out every single name.

Come From Away is a show that I hope becomes immortalized within Broadway and regional theatre. It’s a story that needs to be told and I hope it continues.