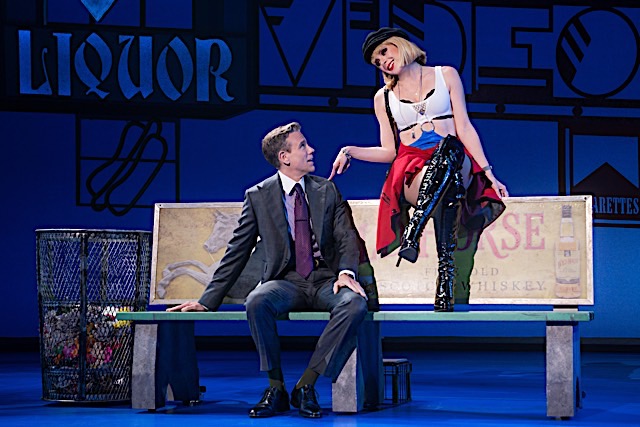 Adam Pascal as Edward Lewis and Olivia Valli as Vivian Ward in Pretty Woman: The Musical

I went into a fairly unique position walking into the Orpheum Theatre earlier this week. That position was that I had never seen the original movie of the musical I was about to watch. That’s right, the iconic Pretty Woman with Julia Roberts and Richard Gere is now a musical. The only memory I have with this movie is my older sister watching it on repeat for a few weeks. It was her absolute favorite. When I asked to watch it one night my mom said absolutely not. It wasn’t until a few years ago I finally looked into it and discovered that it was about a sex worker who falls in love with a rich man.

There is a lot going on with this show, so I really don’t know where to jump in first. When a movie musical like this hits the stage, there are a lot of eyes on it. It’s a way to bring in people who maybe aren’t normally going to the theatre. Usually, it’ll include big investors and a big name or two to bring some more people in. When it originally opened on Broadway, it starred Samantha Barks and Andy Karl. To say this was a success on Broadway would be a lie. It played for roughly 400 performances, received no Tony nominations (literally, not one), and was received pretty poorly. It is no wonder that they brought in Adam Pascal to help lead the touring production…we’ll get to that later because I have thoughts.

Before I dive into why the show just didn’t work, I do want to highlight some pretty positive things I did enjoy. Olivia Valli, who plays the lead Vivian, is easily the best thing about the show. She has a strong yet contained vocal presence through the show. Valli never lets her voice get too out of control with the vocal runs which are shown in songs like Anywhere But Here, my favorite of the night. Her comedic timing is great, and I enjoyed her charismatic portrayal which feels realistic and not too over the top.

The other notable performance I’d be an idiot not to call out is Nico DeJesus who steps in as Giulio, the hotel bellboy. His dancing is sharp, pristine and perfect which makes sense since later that night I discovered he’s also the Dance Captain for the show. He barely has any lines but steals every single scene with a look, a choreographed number or a smile.

The set is one of the better sets I’ve seen from a touring show which includes a large majority of larger than life set pieces that fully encapsulate each scene without adding too much. They establish every moment and I’m surprised that it took this show for someone to figure out finally what works and what doesn’t with a touring musical.

Now for what doesn’t work with Pretty Woman: The Musical is maybe one brought a lot of people in and that was Adam Pascal. Yup. The Adam Pascal, Broadway’s golden boy and original cast member in the off-Broadway production of RENT. Pascal is just not right for this role. It feels like he’s singing in a different show because his vocals just don’t fit with the ’80s/’90s vibes the music gives. Also his voice seemed a bit strained at times. Just feels out of place.

Most of the time, the problem that I have with touring shows is the book and Pretty Woman is no exception. While I went in completely open minded, and I even thoroughly enjoyed the first Act, there wasn’t much substance. It’s a typical show that has a girl being saved by a rich man. However, what is Edward’s motivation for wanting to be with Vivian? Just the lyrics “there’s something about her” in one of the first songs? Sorry, not strong enough. I needed more about his past life and relationships as to why he’s seeking comfort in Vivian.

As Act II opened, I thought about what the conflict of the show is. Normally an Act I finale would include some sort of potential cliffhanger that sets up the conflict for the second half of the show however it was nowhere to be found. It just didn’t work. The conflict popped up in the last ten minutes and was resolved so quickly before it gave us, or even the characters, a second to figure out what happened.

This show is fairly new, and I’m surprised that even in this decade the writers didn’t update the language a bit. Yes, it’s based on a movie, but does that mean it needs to be a carbon copy? Are we still using language like hookers and prostitutes? Could they not have updated it to use language like sex workers? Carol Leigh first coined the term ‘sex worker’ in the late ’80s, writing that it “acknowledged the work we do rather than defines us by our status.” A simple update like this I think was needed.

While Pretty Woman: The Musical has some pretty big talent (big, huge!) and impressive vocals that isn’t enough to save it from the lack luster book and songs that try to bring this fan favorite movie to the stage.