Liv Garber: I Thought You Said This Would Pass 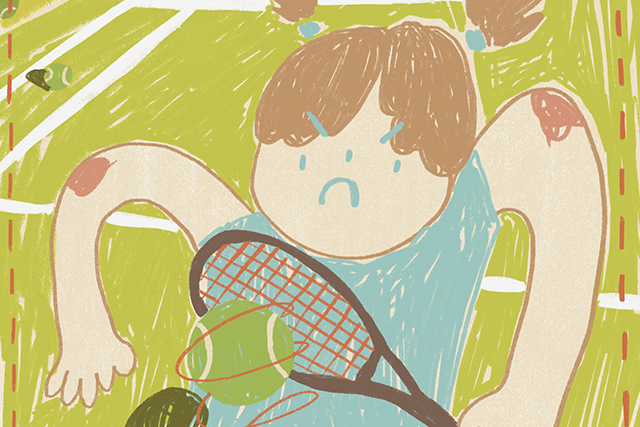 Some years ago in Los Angeles, there was one iteration of the Jon Braver production Delusion, which is a seasonal “interactive horror theatre” series—in short, audiences sort of become characters in a live-action horror movie. There was this scene in which the audience had to hide under something of an oversized kitchen table, and around that table walked these giant legs. It was terrifying, and oddly moving—some audience members cried. Because it echoed a common but forgotten experience; Delusion’s narrative expertly touched a spot in its audience—the intersection of the hippocampus and the substantia nigra—and viscerally brought them back: it found the line connecting the head to the heart, and plucked it like a guitar string.

Because your child self is still very much imprinted on your consciousness: you do not grow out of being a kid, as they say; you grow around it, like a mollusk around a pearl.

To observe the work of New York City-based nonbinary artist Liv Garber (they/them) is to immerse oneself in the kidscape: everything is bright and big and loud. It’s a universe equal parts fun and scary. The work is spellbinding, gorgeous and spectacularly moving (interestingly, the inverse of Liv’s illustration work—their oil painting—is classical and studied and masterful). You find yourself smiling at the absurdity of your own experiences. These could, in fact, be pictures of memories lost to you. Oversized everything. A child illustrating a Mother’s Day card poolside, about to be mercilessly splashed. Some disembodied teeth. The urgency and excitement of it all—like a Michel Gondry fever dream set to canvas. And as you peruse, you begin to see a narrative: Liv’s life, however funhoused, played out in all its happiness and pain: the isolate child with their rooftop McDonald’s, later graduating, later moving, alone—literally and figuratively into adulthood. Because, for an instant, being a kid can feel careless and free. But growing pains last forever.

We sat down to chat with the refreshingly charming and fascinating artist, who recently started working at a bakery “where we draw celebrity faces and doodles on cookies” and the most popular requests are “mostly Kardashians,” but, chiefly, “the one where Kim loses her earring.”

Are you originally from New York?

No, I’m from Pennsylvania, originally. Westchester area, kind of on the border of PA and Delaware.

Growing up was…fine. It was pretty boring, because you have, like, suburban sprawl. [Laughs] And then large stretches of non-usable farmland, just décor farmland. There wasn’t a huge art scene or queer community or anything. I found that, obviously, later in life—when I went to college. I felt way more at home at college and in New York than I did growing up.

What’d you do for fun back in your hometown?

I was a really shy and, like, weird kid. So I would just draw a lot. That’s where I started doing art. I had really bad social anxiety when I was a young kid. Instead of going out, I’d be drawing. That’s when I started exploring the arts, and I feel my world was mostly online, and that’s where I found the arts and other queer people.

When did you realize that you were queer, and what was that journey like?

It was super late in life. All my life I felt queer, but it hadn’t really been popularized yet, in our culture. So I didn’t have any vocabulary for it. I would just, like, Google “Am I Gay Quiz.” [Laughs] And then it was late high school when I met my best friend, and we’d talk about this sort of stuff together. We’d be like, I think we’re queer, we don’t really know. And then it was mid-college when I came out as nonbinary, and I was like, Oh, duh. That was it the whole time.

Was your mom receptive to the news?

Yeah, my mom is so supportive, which is amazing. But she was just confused. She knew what being gay was, but the whole [nonbinary] gender thing was very new. She still sometimes slips up with my pronouns. But every time she corrects herself afterwards, and is very apologetic about it.

She basically did a whole lot of research. At first, she didn’t know how heavy it was for me to be telling her about this. And then as time went on, I think she realized, Oh, this is a big part of your life and a big part of your identity.

Can you talk a little about your journey as an artist?

Yeah. So during high school and middle school, I would draw all the time. I’d make little comics or draw stuff for my friends. And, like, before class started, I was always at the whiteboard, and I’d draw comics of the teacher, and it was really annoying. And everyone knew it was my work on the board. [Laughs] And I’d get yelled at all the time for drawing all over quizzes. I had a French teacher in middle school, and she literally called my mom and was like, “Liv is doodling all over her tests. You gotta make this stop.”

I didn’t think of myself as an artist, or want to do that as a job because growing up I never saw anyone that was an artist or anyone who did anything creative, really. But then I ended up going to the New School at Parson’s—I originally went for Screen Studies, which is in the liberal arts program. Then I had this very abrasive but encouraging roommate who was like, “No, you need to apply for the illustration program.” And with that push I did, and I got in. But I felt very lost because all these kids went to arts high schools, and they’re amazing.

But I was very experimental: I did fiber arts, painting, video art—I literally tried everything. But then, probably my sophomore or junior year, I started getting closer to my style. I started making zines and went to zine festivals. I had teachers where I was like, Oh my God, I love your work. I want my work to be part of this world. And I finally got an identity within my work.

You’ve said that your work is very much inspired by your gender identity and by memories of your childhood. What else?

I had a lot of really inspiring professors, and I just love their work. My bookshelf is filled with works by my professors and comic arts, and I have this book by the Hairy Who, which was this band of artists from the ’60s, and I really love their wacky style. Or a song or a movie—I’ll just latch onto a piece of media and get really obsessed, and make something out of it.

Any particular songs, off the top of your head?

It could be anything. Like, there’s this one album by Jenny Hval.

So good! Oh my God. The Apocalypse, Girl album was something I was so obsessed with for years. I would play it on repeat. The poetry and those songs really inspired me.

I wish I had any musical talent. I’ve tried to start a band, like, a billion times, and then two weeks in I remember I’m not musical at all.

Same. Every once in a while a melody will pop into my head, but I have no idea how to make it come to life.

Exactly. I have so many embarrassing voice memos.

Teeth show up a lot in your work. Can you talk about that a little bit?

Yeah. So my mom moved recently, and she has a habit of collecting every piece of ephemera from my existence. And there was a lot of stuff. Like, a lot of stuff, and we had to go through it. It was like, my first pair of sunglasses, a clipping of my hair—truly everything that a mom would have, just never thrown away. And one of them was—and this is really gross—a collection of my baby teeth. Um, all of them. And I was like, no adult should ever see a collection of their baby teeth. In a pile. [Laughs] It was really twisted-looking, because it was in a plastic bag, and it had a little potpourri pouch in it. And it was really bizarre. I was like, This is gonna do something to me, and I don’t know what. But it’s awakened something in me.

And I’ve been drawing teeth, and thinking about how teeth are such an integral part of childhood—the tooth fairy and that whole thing was such a big part of our lives.

No one should ever see a pile of anything from their own body.

[Laughs] It was very witchy. And she was like, “We have to hang onto these.” And so I used it for my art.

This coming spring, I’m having my first-ever solo show at Junior High L.A. [603 S Brand Blvd, Glendale, CA—opening night is March 11th from 7 – 10PM, and it goes on until 6PM Sunday, April 3rd]. And the whole show’s going to be about teeth. [Laughs] So that’s exciting.

This is the Love & Marriage issue. Can you talk about your love life at all?

Sure! I feel like I’ve been truly blessed with a very easy, nice love life. I’ve been with my partner for almost five years, which is kind of wild because we’re both very young. My partner is such a huge part of my life, and has been such a positive element. It’s nice, it’s been working, and every year we just sort of renew the subscription.