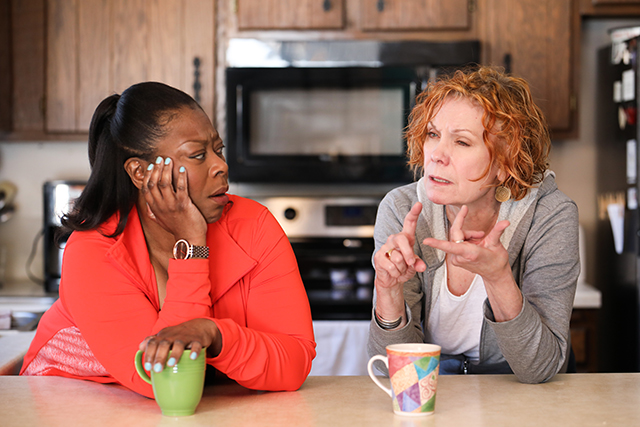 Back in 2018, Hannah Gadsby world flipped upside down when she became a global sensation after the success of her critically acclaimed Netflix special Nanette. She won an Emmy and a Peabody for her work however as opportunities continued to come her way, she decided to stick with what she loved which was standup comedy. When 2020 happened, she bunkered down in her homeland, Australia, sheltering herself and pondering what was next. Now that time of pondering is her new show.

A story that many know that takes place in a small, cramped and hot New York City jury room. In this room, twelve men debate the fate of a young defendant charged with murdering his father. At first, it seems the story is a court room drama, but it’s true purpose is a crash course in those passages of the U.S. Constitution that promise defendants a fair trial and the presumption of innocence.

Perfect Arrangement
June 3 – June 26
Theatre in the Round
TheatreInTheRound.org

In 1950, the Red Scare ran rampant across the country. Fear that Russians and Communism had infiltrated the United States was all over. However new colors were being added to the Red Scare. Two U.S. State Department employees, Bob and Norma, have been tasked with identifying sexual deviants within their ranks. There’s just one problem: Both Bob and Norma are gay, and have married each other’s partners as a carefully constructed cover. Inspired by the true story of the earliest stirrings of the American gay rights movement, madcap classic sitcom-style laughs give away a provocative drama as two “All-American” couples are forced to stare down the closet door.

This dark comedy about reinvention, directed by Greta Grosch, pairs two unlikely roommates – a sheltered, newly divorced MIdwesterner with a mysterious NYC vegan lesbian. As the two begin sharing pieces of their past, they discover what it takes to re-route your life – and what happens when the wheels come off. What is described as ‘Breaking Bad meets Grace and Frankie’

The resort town of Discovery Island descends into chaos, with trash cans looted and hairballs fouling the streets, the local conspiracy nut Jerry Loudermilk convincing the locals that a supernatural forest beast called ‘Megapaw’ is to blame. When aspiring teen detective Winnifred Highsmith goes missing after discovering a baby Megapaw, the alarm is sounded and Montgomery Ward, Canada’s elite forest ranger, arrives to save the day! Suddenly everyone is lost in the woods, seeking the hidden heart of the forest. Will they find it before the shifty resort owner burns down the trees to make a bigger golf course?