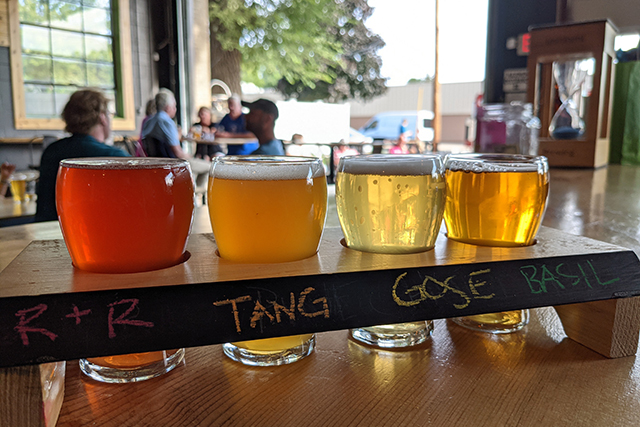 Revelation Ale Works is a small, seven-barrel taproom in Minnesota’s northwesternmost corner, in a blip of corn silos and grain elevators called Hallock (pop. 981). The landscape is practically featureless, a flowchart of sugar beets and soybeans broken by farmhouses and the odd cottonwood. The soil is loamy and black and fertile. I get so lost on my drive (cell service north of Grand Forks is basically a punchline) that when I stop at a gas station for directions, the attendant has never heard of Hallock.

The brewery occupies the historic Johnson Standard Building, an old service station “in the heart of downtown Hallock.” Ryan Evenson, who co-owns Revelation with his wife Lindsey (and four employee owners), bought the building for $100.

“We moved back here [from Oregon] some years ago,” Ryan says. We’re standing in Revelation’s bustling L-shaped taproom, where I’m sipping a very citrusy dry-hopped Edison’s Medicine New England IPA (ABV: 6.4%), with Ryan and his wife Lindsey. He continues: “I’m originally from Thief River Falls, just an hour south [and where I’d asked the walleyed gas station attendant for directions to this very spot, coincidentally]. I heard from the City Administrator that they were gonna tear this building down – they were using it for storage, there were holes in the ceiling, it’d rained in here—so I went to them and said, ‘Instead of tearing down this awesome building, how about I give you a hundred bucks for it?’”

The taproom is simple and stripped-down, and maintains a lot of its authentic service-station ambience.

“We tried to retain as much of the original building as we could,” Ryan says.

For a brewery in a rural farming community, an ostensibly domestic-lager demographic, the place is packed to capacity. There are young professionals, farmers, sweater-wearing academics, flinty-eyed loggers, all tipping back cutting-edge brews like Blood Orange Wheat and Bottomless Brunch Blood Orange Sour.“There’s a little bit of skepticism that comes in a small town when you’re doing something different,” Lindsey says, pouring me a pint of Peanut Butter Stout (ABV: 4.9%): it’s like a liquefied Reese’s Peanut Butter Cup, in the most delicious way possible. “But we restored and moved into a building that people wanted to be saved, so I think people were behind us because of that.”

She adds: “When you see somebody doing something start to finish, that is so rural America.”

Hallock is about ten minutes from North Dakota, twenty-five from Canada. The surrounding countryside is decidedly geometric, almost devoid of topography, obscure latticework glanced from an airplane window. This could be Iowa or Kansas, could be Australia’s Cloncurry. Anywhere flat and vacant.

After a quick breakfast at the Caribou Grill the following morning, I leave town, heading east along the American boarder. That breweries are opening up here, in the middle of nowhere, is a testament to this country’s industriousness and rural grit.

Loony’s Brew, in the 0.14-square-mile town of Ranier (pop. 560), sits directly across Rainy River from Ontario. Loony’s doesn’t look like a brewery. It looks like a pub, which it was—Woody’s—for years. It’s quaint, intimate and charming. The aesthetics for which breweries have come to be schematized tend to fall between rustic and industrial: stainless steel, exposed brick, timber frames, etc. This, I suspect, is to seamlessly integrate the distillers and circulating tanks and fermenters, all of which look about as quaint as a missile silo.

Inside, I meet with Matt Kavan, who co-owns Loony’s with his brother Paul. They bought the place from Barry “Woody” Woods in 2015. I order a Drunken Loon Strong Dark Belgian Ale (ABV: 8.5%)—pungent, peppery, and heavily spiced with stuff like star anise and Aframomum melegueta. It’s delicious and smooth, and deceptively sweet. In other words: a quintessential cool-weather beer. You could warm it up and sip it on Christmas Eve.

“I putzed around with homebrewing a little bit,” Kavan says, “but I mostly messed around with, like, mead and stuff like that. But I lived in Belgium for a few years, and they got a lot of interesting beers. So I got a lot of ideas.”

The idea Kavan is most excited about? An antiquated beer called gruit, and Loony’s now serves their own with ginger, lemon and flaked rice.

“It’s the way they used to do ’em,” he says, gesturing abstractly with his hands, “back, let’s say 300 years ago, before hops were mandated. Basically, a gruit uses a lot of other different herbs and spices and stuff like that. So this [first gruit] that I brewed—I went a little nuts—had 32 different herbs and spices, including wormwood, yarrow, mandrake root, and about half a dozen ones that contain this compound thujone, which is safe in small amounts to give a little different inebriating effect than alcohol.”

Fun fact: Thujone is a toxic monoterpene, and can be fatal if consumed in large quantities.

Back at my cabin, a comfy little place owned by local entrepreneur Mary Ann Kasich at Woodsport Cottages, I kick back, crack open a crowler from Junkyard Brewing Co. down in Moorhead, and gaze out at the spectral expanse of Ranier, which grades wildly into Voyageurs National Park.

While the city of Northfield (pop. 20,445) in central Minnesota isn’t exactly rural, as we’ve come to understand that concept, it does meet the rural population density requirements defined by the United States Census Bureau—that is, fewer than 50,000 people. And Northfield, with its spires and copulas and squat Richardsonian architecture, feels rural, like Georgetown or some New England hamlet. It’s pastoral, too, bisected by the Cannon River and surrounded by furrowed farmland. And Benjamin Percy, award-winning author of novels like Red Moon, The Dead Lands, and 2021’s The Ninth Metal, also calls Northfield home.

“One of the reasons I like living here,” he says, “is that it’s a really progressive community. You’ve got the two colleges [St. Olaf and Carlton] here. There are a lot of smart, interesting people. Very close-knit. This is not reality. You could leave your wallet on the corner, come back a year later and it’d still be there.”

Fun fact: I actually leave my phone on a bench outside Goodbye Blue Monday Coffeehouse, realize I’ve left it while hanging out by the river, run back in a panic, feel my heart splash into my stomach when I don’t see it on the bench, but am impossibly relieved when the smiling barista inside hands it across the counter and says, “Yeah, somebody just brought it in.”

I’ve met up with Percy at Imminent Brewing, which is owned by two married couples—Randy and Tonja Clay, and Derek and Laura Meyers, who opened the brewery inside the old Northfield Armory, a Gothic Revival redbrick on the corner of 6th and Division.

I dismiss my quivering liver and order a Double Agent J Double IPA (ABV: 8.5%); Percy goes with a Dragon Squirrel Juicy IPA (ABV: 6.6%). The Double Agent is fantastic—explosively hopped with a punch of citrus. We snag a coveted high-top in the corner. The place is packed.Imminent is all angles and lines, high ceilings, huge windows, steel, brick, the works.

“The community was eager for a place to hang out,” Percy says. “This place is doing fantastically. They’ve exceeded expectations.”

Like many Minnesotans (and implants), Percy’s drinking habits are dictated by the seasons. “In the winter, I drink a lot of stout,” he says. “There’s something about, when it gets cold out, sitting by the fire, sipping either scotch or something thick and black. Summertime, though, I’ll drink lighter beers. I’m almost IPA-exclusive. I’m kind of a boring drinker, in that I know what I like and I tend to stick with it. Conservatism in my palate alone.”

The population of Fountain is “about 400,” according to Eric Luoma, who co-owns Karst Brewing Co. in this southern Minnesota town with his wife Sandra.

We’re standing inside Eric and Sandra’s 612-square-foot brewhouse, which is the latest incarnation of a former one-room schoolhouse. This used to be Karst Brewing Co. in its entirety—small bar, a dozen high-top café tables, a communal farmhouse table, and a movable half-wall that separated three brite tanks from the seating area, thereby niftily meeting code. It wasn’t exactly a study in feng shui, but their utilization of space was extraordinary.

These days, they’ve acquired two adjacent buildings and expanded. There’s now one patio behind the brewhouse and another in front of the new taproom, which was formerly a lumberyard office. Both patios, Eric says, “are created with large granite pavers that were salvaged from the Nicollet Mall in downtown Minneapolis.” There’s a theme here: reuse, recycle, reimagine.

“The best part, hands down, for me, is watching people,” Sandra says. “They sit there, and they’re playing a game, and they’re having so much fun. That’s the best part. People just having a heck of a good time.”

Karst gets its name from the honeycomb-like topography on which Fountain, the “sinkhole capital of the United States,” is built; the earth is apparently porous as bird bone. Karst itself stands precariously atop a sinkhole, or karst, one large enough, the story goes, that an old steam engine was dumped in to help fill it.

“People around here like to drink,” Sandra says. “We remembered that from when we grew up [in nearby Chatfield]. I think they’re so happy to have a business in town, too, that they will come fill up a growler, even though they could go buy a six-pack of something cheaper. They’re so proud.”

“It’s like a gathering place, which is kinda what craft beer is about,” Eric says. “It’s not about going to the bar and getting drunk. It’s enjoying beer, yeah, but it’s about visiting. It’s a meeting point.”

He adds: “There isn’t much to do in Fountain.”

As this trip comes to an end, I get to thinking: Craft beer has become ubiquitous – when I grabbed a quick lunch at Rosalie’s, a dive bar in the northern border town of Baudette (pop. 1,032), I ordered a pint of Third Street Hop Lift IPA; Upper Michigan’s Copper Harbor (pop. 108), “the farthest town from an Interstate Highway in the continental United States,” has a brewery; there’s a brewery inside a Reno casino, a brewery in Tampa International Airport’s Terminal C; Brewery Vivant, in Grand Rapids, MI, is in a funeral home. There’s even a military-only brewery on Pearl Harbor. In Raleigh, NC, there’s a bar with 366 beers on tap. Rogue’s Beard Beer uses yeast cultured from brewmaster John Maier’s beard; 40FT’s Odius Ale uses yeast swathed from author Roald Dahl’s writing chair. Evil Twin brews a beer with frozen pizza and money. There’s beer made with chicken, beef heart, goat brains, bull testicles, elephant dung, sheep dung-smoked whale testicles, human urine. Scotland’s Brewmeister makes beer with an ABV of 67.5%. I start to wonder: When will the beer bubble burst?

For now—on the other side of a global pandemic, no less—craft beer shows no signs of slowing down. Especially out here, in the middle of nowhere.