Another Season With The Orpheum 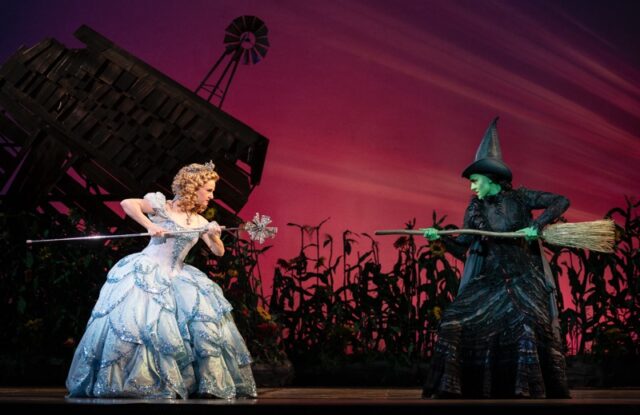 For the Orpheum, a new season means a new crop of previously Tony Award-Nominated and Award winning shows coming to the Twin Cities. These have ranged from blockbuster hits like the Lion King to even smaller known musicals, but still equally as incredible, like The Band’s Visit. After some cancellations and rescheduled due to the COVID-19 pandemic, Hennepin Theatre Trust is back with a huge season. I’m happy to be sharing with you all the newest season from Hennepin Theatre Trust.

Wicked
July 27 – August 28
On the heels of the blockbuster movie adaptation starring Cynthia Erivo and Ariana Grande, Wicked is flying its way back to the Twin Cities for a nearly month-long run. The untold story of the Witches of Oz takes place way before Dorothy and Toto dropped in. Two young women, one bubbly blonde and another born with emerald-green skin, go on an adventure of a life time as they understand their new surroundings, each other and more importantly themselves. With hits like One Short Day, Popular and Defying Gravity, this is surely not to be missed.

Cats
October 25-30
A forever classic, Cats has enchanted audiences across 30 countries and 15 different languages. Winner of 7 Tony Awards including Best Musical, Cats tells the story of one magical night where an extraordinary tribe of cats gathers for it’s annual ball to rejoice and decide which cat will be reborn. Cats is one of the few Andrew Lloyd Webber productions I have yet to see which is why I’m thrilled it’s going to be returning to Minneapolis.

Les Misérables
December 6-18
Les Misérables is another classic that will be coming and a must see for any die hard theatre fan or someone dipping their toes into musical theatre for the first time. Set during the 19th century in France, Les Misérables tells a story of power, love, redemption and sacrifice. With a soaring score, ,this Tony-Award winning show features Broadway standards like I Dreamed a Dream, On My Own, and One Day More. Absolutely a must see!

Hairspray
January 10 – 15
Whether you’re a fan of the movie or not, the live musical is always better. This Broadway musical comedy takes audiences on a hilarious ride with 16-year-old Tracy Turnblad. Set in 1960s Baltimore, Tracy has the chance to finally dance her way onto a popular TV show. Hairspray rarely gets produced even in local and regional theatre so it’s absolutely the perfect time to see it!

To Kill a Mockingbird
February 14-19
One of the greatest pieces of American literature is now not only a play but “the most successful American play in Broadway history” according to the New York Times. Based on the 1961 Harper Lee novel, the story follows two young children in a small town in Alabama. The coming of age story chronicles their childhood and their father, Atticus Finch, who is a lawyer and defending a black man falsely accused of rape. With themes of racial prejudice, innocence, justice and courage, To Kill a Mocking Bird is a classic staple in American literature.

Hamilton
April 4 – May 6
The cultural phenomenon that is Hamilton returns to Minneapolis. Based on the story of America’s Founding Father Alexander Hamilton, an immigrant from the West Indies who became George Washington’s right-hand man during the Revolutionary War. With a book, music and lyrics by Lin-Manual Miranda, Hamilton brings a fresh and unique perspective on historical story telling through the lens of rap and hip-hop.

Tootsie
June 20 – 25
Sometimes there is nothing better than a simple comedic musical and that is what Tootsie claims to be. It tells the story of Michael Dorsey, a talented but difficult actor who struggles to find work until one-show stopping act of desperation lands him the role of a lifetime.

Jagged Little Pill
August 8-13
Featuring music based on Alanis Morisette’s discography, Jagged Little Pill is about joy, love, heartache, strength, wisdom and life. It features what appears to be a perfect American family however they are struggling with addiction and trauma privately.

Beetlejuice
September 19-24
Quite possibly one of the shows I’m most excited to see again is Beetlejuice. After seeing it in 2019, I was pleasantly surprised. It’s high camp, extremely entertaining, a visual spectacle and honestly really just a fun show. While normally I’m usually over the remake of movies and books into musicals, I was thrilled to see this going on tour. Beetlejuice is based on the beloved Tim Burton film of the same name and tells the story fo Lydia Deetz, a strange and unusual teenager whose whole life changes when she meets a recently deceased couple and a demon with a thing for stripes.