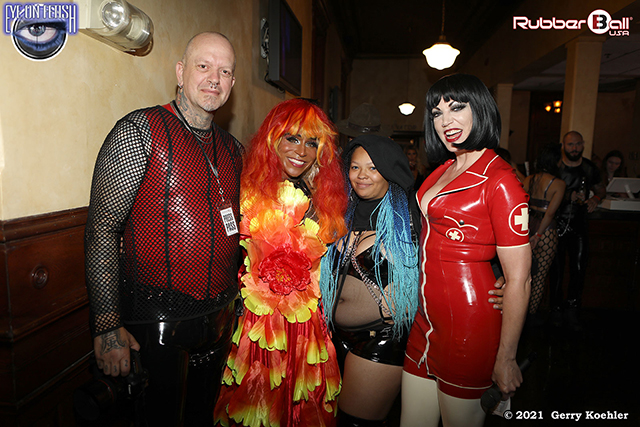 After watching a grown man willfully disrobe in front of a gathering group of strangers, most of whose body parts that would normally be covered are now mostly uncovered—beneath pasties, G-strings, tiny swatches of neoprene—and after watching this man, down to his red boxer briefs, get shackled to a large wooden X-cross by a woman clad in an abbreviated latex sun dress, I think about my dogs. It’s been raining off and on all night. And Barney’s scared of the rain.

The woman swings a leather bullwhip, winding up as a pitcher might, and strikes the man across the back with such force that I wince and turn to my left, facing another man in a rubber puppy mask, whose eyes inside the mask meet my own.

That’s the thing about the Rubber Ball USA: Your eyes don’t know where to look, and all night mine seem to be ricocheting all over the Historic Concord Exchange in South Saint Paul.

“Our event is very much the spiritual successor to the Rubber Ball produced by Mistress Jean Bardot from the ’90s through the early ’00s,” says Vincent Valcroft, Director of Marketing & Entertainment for Rubber Ball USA, who also manages Bondesque in Uptown Minneapolis. “In 2016, we approached Mistress Bardot and asked her if we could give new life to the Rubber Ball event she’d produced in the past. We were granted the production rights, and we produced our first Minneapolis Rubber Ball. It was one of the biggest fetish parties the Cities had seen, featuring an impressive lineup of international fetish stars, and we’ve kept growing since.”

There are bunny masks, gas masks, masquerade masks, gimp masks, full-face leather BDSM masks studded with metal bullets. There are sensory-deprivation hoods, muzzles, folks in puppy suits being led around on leashes. There are horse bits, chastity harnesses, and all manner of exposed human flesh. There is a tall man in full (rubber) Scottish bagpiper regalia, made taller by platform shoes and towering feather plume. There are furry tails everywhere. I watch a ball-gagged girl flogged on all fours. I watch a willowy man in lingerie tied down and tickled, his ruby red stilettos writhing. There are beautiful people everywhere I look, laughing, conversing, observing, respecting each other’s space and boundaries. And the freedom of sexual expression is so palpable here at the Concord you could practically distill it.

I try not to ogle, and instead perform a vacant dumbshow of ennui, fixing my gaze in the middle distance, as if I’ve seen all this before.

I am not wearing rubber. I’m wearing a blazer over a contextually alien Hawaiian shirt, pleated black pants cropped above the ankle, and black oxfords with no socks. I mention this only because many of the people I pass look from my face to my ankles and back to my face—so often, in fact, that I start to compulsively look down at my ankles. A group of girls in bodysuits, some wearing cat ears. A man lounging on the landing in ass-less chaps. An oiled bodybuilder in nothing but a thong and bowtie and, if memory serves, a little hat. In the men’s room, I nod to an elderly gentleman whose top hat has the word DADDY in metal letters across its band as another guy struggles to free himself from his rubber puppy suit. So many pairs of exposed breasts (nipples covered, however precariously, as per RBUSA’s guidelines) that I feel the muscles under my left eye begin to twitch.

“The people who attend our events are so wonderful,” Valcroft says, “and they often express how happy and grateful they are to be [at the Rubber Ball], and how much fun they’re having. As a producer, hearing this kind of feedback is what makes it all worth it.”

Over the crowded dance floor, DJs noise and Fenris drop beats vacillating between ominous/ecstatic and dreamy. There are various tables set up by local purveyors of luxury gear: CherriTree Designs sells handmade leather corsets and other goods (including paddles stitched with words like BRAT, PRINCESS, MASTER and BITCH); Haus of Elle provides artisanal leather harnesses, collars and cuffs; Lazarus Redmayne’s The Duchy, “one of the oldest and friendliest places on the web to learn about rope bondage” and one of SexualAlpha’s 2020 Top 50 Kinky & BDSM Blogs, offers bondage tutorials in an upstairs corner; and the Centre for Sexual Wellness (“sex-positive, LGBTQIA+ friendly, and kink-competent”) is stationed at an info booth.

And then there are the performers, whose athleticism is nothing short of astonishing. There’s no cool, affected ennui here; my jaw literally goes slack. When Megan the ManEater Carter performs a series of, like, backflip/splits and repeatedly sticks the landing, I rattle my head, dazzled. And with every subsequent performer—Mistress Jean Bardot, Madame Bee, Blackryver, the internationally lauded RubberDoll—the crowd is transfixed, beaming, alight.

To me, RBUSA is not simply about sex; it’s a triumph of expressive freedom, of individuality and the total absence of judgment. Or, as Valcroft puts it, “a celebration where we can all embrace the kinky, glamorous and sexy part of ourselves that we don’t necessarily show day-to-day.”

The drive home is peaceful, South Saint Paul’s vacant streets misting. Barney greets me at the door, storm-torn and quivering. When I take him out to go potty, he keeps looking up at my face, like, “I’m cool. I already pissed in your bedroom.”

Back upstairs, I crack a beer and recline on the couch in front of the TV, both dogs coiled on my lap. If there were a loved one beside me, our faces lit by HBO’s aquarium glow, this would be the picture of Rockwellian domesticity. I consider my comfort zone, and how tonight its perimeter grew slightly. And I imagine all those folks at the Rubber Ball across town, still celebrating into the night, perhaps wondering when—and where to—that strange guy in the Hawaiian shirt could’ve disappeared. Perhaps not.