Anastasia at the Orpheum 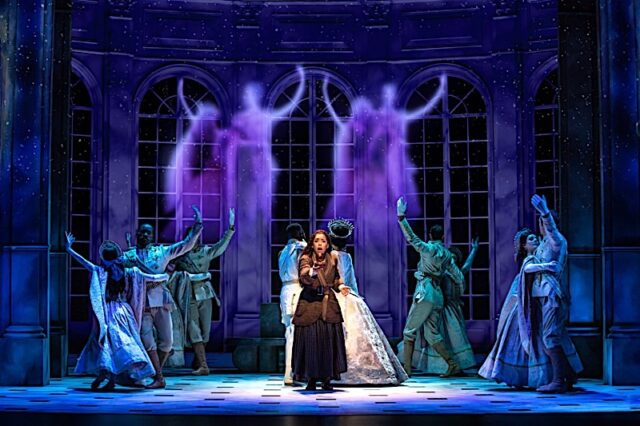 In July of 1918, the last Tsar of Russia, Nicholas II Romanov, and his family were executed in their family home. After that rumors swirled that his daughter, Anastasia, was potentially still alive, which helped spawn countless stories, shows, movies, books and a variety of adaptations. Potentially the most well-known adaptation is the 1997 animated movie with Meg Ryan and John Cusack. Now it’s a Broadway musical—because honestly what isn’t these days—and it’s currently touring across the country, including a two-week stay in Minneapolis.

The musical Anastasia takes a very similar approach to the animated movie in which the Romanov’s are murdered, Anastasia is potentially still alive and her grandmother, the Dowager Empress, puts out an award for anyone who can bring her safely to Paris. Enter Dimitri and Vlad who are con artists that want the reward and have been searching for an actress who can pretend to be Anastasia. That’s when “Anya” falls into their lives, the actual Anastasia who has since gotten amnesia and doesn’t remember she’s the real missing Romanov. The two conmen go on a journey to teach Anya how to be Anastasia—again not realizing it’s really her—and take a trip to Paris to meet with the Dowager.

Without beating around the bush, Anastasia features a subpar book, music and lyrics. There is a bit too much going on with the book and that’s mirrored in many of the actors’ performances. Simply put, the book has an identity crisis. What type of show does it want to be? Is it over-dramatic and soap opera-esque, like some performers made it? Or was it a typical story about a woman overcoming her past? There was simply too much going on.

The only songs that really had me smiling were ones that were from the original movie, including “Rumor in St. Petersburg,” “Once Upon a December” and “Journey to the Past.” From the original music that was written for the show, nothing really jumped out at me as revolutionary or truly noteworthy. They were all fairly forgetful, however that has nothing to do with the skill of the ensemble and leads who performed each piece wonderfully.

Breaking the musical down further with the characters, there is one thing that really sets it apart from the movie and that’s the conflict and antagonist. While I try my best not to compare, they have two very drastic differences where one includes an evil sorcerer by the name of Rasputin, and the other is a General by the name of Gleb Vaganov. Gleb is a member of the Bolsheviks who rule Russia after the downfall of the Tsar.

Gleb is an interesting character; he feels a bit incomplete, however. At times I truly didn’t understand his motive or his purpose within the overall story, other than simply to kill Anya so that she couldn’t return. At times he felt compelled to ensure she’d end up dead, while other times he seemed almost in love with her. This left the ending of the show even more confusing when he spent the entire time chasing her through Russia to Paris, only to let her walk free. It just wasn’t compelling enough for me.

The touring production I’m told isn’t much different from the original, technically speaking. The stage features two large side panels and one large screen in the back, all projectors. Projector screens are frankly not my favorite piece of theatre technology. It was shown how unreliable it was when in the beginning a red streak was featured across the back of the stage, and near the second act there was a flickering moment that was distracting. I’d rather see actual artistic pieces on the stage to symbolize and take me to the land of Paris or the war zone of Russia.

As I always mention, the material can still not be reflective of the talent that the actors have. Brandon Delgado, who plays Gleb, had such a lovely baritone voice. It was concise, clear and magical. Kyla Stone, who plays our title role, portrayed Anastasia as a strong empowered woman who had to learn a lot on the streets, which is very different from the movie’s depiction. Sam McLellan and Bryan Seastrom, who play Dmitry and Vlad respectfully, are a standard comedic duo that bring lightheartedness and laughs to the show.

When it comes to a standout performance, though, it has to be Madeline Raube as the Countess Lily. Although a small role, Raube steals the show with her performance of “Land of Yesterday,” quick wit and comedic timing. She was by far my favorite thing about the production.

Overall this wasn’t my favorite musical adaptation of another story. Maybe it was the long, slow first act or the music that really didn’t feel like it pushed the story along. It just felt like it was missing something throughout the show.

Anastasia is playing at the Orpheum Theatre now through December 19. Tickets can be found at HennepinTheatreTrust.org.