Dining Out for Life

Join Sven Sundgaard in Raising Money for The Aliveness Project

This time of year, it’s very easy to feel poor: months of high energy bills, taxes, and home improvement projects all pile on at once. This season in particular, our budgets are stretched even thinner, as more and more of us face pay cuts and layoffs, plus multiple international crises have required our aid as a nation and as a people. It’s all too easy to forget that we are comparatively very wealthy. The truth is that getting takeout coffee, renting a movie, or eating out at a restaurant may seem like basic living expenses to us, but in most parts of the world, they’re luxuries. 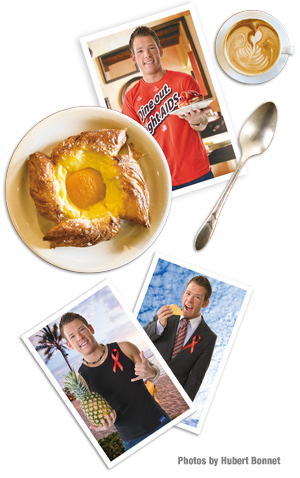 It’s pure genius, really, that someone had the idea of turning what Americans do best—spending money on a luxury—into an international fundraising event called Dining Out for Life. It works like this: Most of us have room in our budget for eating a meal out now and then, so if we just do so on April 29 at one of many participating restaurants throughout the Twin Cities, we will raise around $127,000 for The Aliveness Project.

Last year, Dining Out for Life accounted for 14 percent of the organization’s total budget—truly a staggering percentage, especially in light of what it is able to do for Minnesotans living with HIV/AIDS. Under one roof, it provides meals; a food shelf; integrative therapies like massage and acupuncture; case management; health and wellness seminars; and holiday baskets.

The Aliveness Project can do so much for so little thanks to a veritable army of volunteers who donate nearly 550 hours of their time each week. Their valuable skills are put to use in assisting more than 1,600 individuals each year, which amounts to about one in four people diagnosed with HIV/AIDS in Minnesota.

Perhaps the most significant service the organization provides clients is the most difficult to quantify: It offers a supportive, safe place of community.

Tim Marburger, Director of Fundraising and Special Events for The Aliveness Project, says, “It’s definitely a freeing place where you can just be, and not have to worry about what people might think if they find out you’re HIV-positive. Often, when you think of AIDS, you think, ‘It’s going to be dark, and everybody’s going to be sad,’ but hearing the laughter and the conversation here—it’s really neat to know that people can just be themselves.”

HIV/AIDS doesn’t always grab headlines these days, but the rates of new infection in some demographics, including African-Americans and women of every race, are on the rise. What’s more, the Minnesota AIDS Project (MAP) reports that the rate of new infections among gay and bisexual men under 24 has doubled between 2001 and 2008.

Marburger laments, “It’s just a terrible increase. I came to know a young man who came to us when he was 18. And I can’t even fathom to think of being HIV-positive at 18. What does life look like? Some people say that the meds are kind of like taking chemo every day, and they can just wreak havoc on a person’s body. As a youth minister, I’m worried about seeing the influx and the growth. They haven’t seen the people die like we did.”

While rates of infection are discouraging, the other side of the statistics is that people who have been diagnosed with HIV are living much longer lives. It is a wonderful thing, but it results in a broader client demographic for HIV/AIDS organizations and activists.

Marburger, who has been troubled in recent years that The Aliveness Project’s current facility is not easily accessible to an aging population, explains, “Our building now is on two different levels. Thank God people are living longer with the meds, but that doesn’t make stairs any easier.”

Responding to the call, The Aliveness Project has purchased a new building in the Kingfield neighborhood of Minneapolis that will be able to accommodate not only the growing HIV/AIDS population in Minnesota, but also more people with special needs.

Marburger points out, “The new place will have an elevator that will take you to your massage therapy, or to the first floor for your meal or the food shelf.”

Right now, however, the new 12,000-square-foot space needs major renovations. It’s no small task, but Marburger hopes it all will be ready by the fall of 2010. It would be especially nice to see completion then, as The Aliveness Project is celebrating its 25th year of service, and the new space would be a lovely anniversary gift to both patrons and staff who have done so much for Minnesota.

In order for that to happen, we Minnesotans must go out to eat on April 29. Participating in Dining Out for Life never has been easier, thanks in no small part to Marburger, who has re-upped almost all of the Twin Cities restaurants that have participated in past years, plus added a few new ones, for a total of more than 120 this year. He is especially pleased that diners in Afton, Duluth, Rochester, and Stillwater have local restaurant options this year.

Marburger declares, “You can have pizza or lobster, or anything in between. Dining Out for Life is an easy way to get involved.”

The fundraiser is in need of outgoing volunteers who can function as restaurant “ambassadors.” It only requires inviting friends and families to a particular restaurant, socializing, collecting additional donations, and working with the establishment’s staff to make sure the event runs smoothly. A sign-up sheet and a list of participating restaurants are available at The Aliveness Project website.

“Dine out. Do good. What more can one say?” Marburger asks.