Under The Tuscan Sun 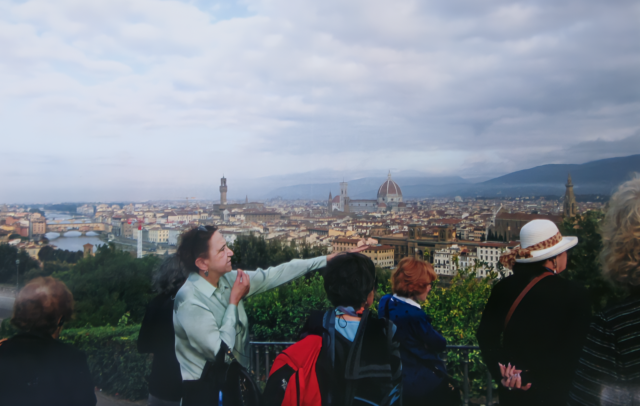 Guide Gemma points out landmarks from a piazza above the city of Florence. Photos by Carla Waldemar

“Allora!” This is Inez talking. She’s the leader of our Smithsonian Journeys program enabling participants (26 of us) to live in Florence, Italy for three weeks.  It means “listen up” or “well, then” or “okay.” It got our attention as we settled into our apartments in the working-class neighborhood that would be our home for the duration.

Our group got its bearings on Day One via a tour around the neighborhood’s piazza, our go-to site for groceries (“Non toccare! —“Don’t touch!” chastised the fruit seller when—foolish me—I tried to pick out my own oranges), along with a pharmacy, gelateria, coffee bar and trattoria. Emma, who would be our guide on museum visits as well, taught us, first of all, how to cross a street: “Treat the drivers like dogs,” she counseled. “Just look them down sternly and proceed.”

She then trained us in how to ride the tram into the historic city center (four stops on the always-packed train on which, as far as I could observe, no Italians ever paid for their ride). Then, out with the map that would be my lifesaver when wandering in our many days of free time, punctuated by the group’s guided museum visits: a huge bonus because our pre-arranged entrance tickets allowed us to skip the blocks-long lines at all the must-see spots.

Yes, I’d been to Florence several times before, always in a rush from palazzo to museum to famous church to dinner. This visit, there was plenty of time to “fare niente”—to foster the Italian love of “doing nothing”—which, in my case, translated to visiting and revisiting my favorite bold-name artists’ works on the very spot where the Renaissance got its start in the late 1300s. And hanging out on the plentiful piazzas, watching the world go by.

I’d wander into Santa Maria Novella to gawp at the church’s breakthrough painting by Masaccio, who first showed the world how to use perspective to liven the former flat line-up of saints. Then I sat right under Giotto’s earlier, earnest Crucifixion and absorbed its intense message.

Another day, I’d arrive before the crowds at the Monastery of San Marco, where Fra Angelico (he’s the one whose chubby cherubs are featured on many a Christmas card) painted a fresco scene in each of the monks’ tiny cells. I’d climb the hill to San Miniato, an ancient church of severe black and white marble, where saints with gold dinner-plate haloes and dark, piercing eyes gleamed through the shadows.

I guided myself through the Bargello—hands down, the best collection of sculpture in town, or perhaps the world, including David as interpreted by Verocchio as a smug young dandy who’d just got the best of Goliath, and David by Donatello—this time in the nude, which hadn’t been attempted since the time of the ancient Greeks. Later—“Allora!”—Emma elbowed us front-and-center to gaze on Michelangelo’s own colossal David at the Accademia.

I returned time after time to the church called Santa Croce to give homage to the bold names of the Renaissance and beyond who lie buried here: Michelangelo himself (it was his parish church), Dante, Rossini and more.  As a group, we pushed through the throngs at the Uffizi—Italy’s premier art museum— while Emma educated us on the development of techniques that revolutionized the art universe, then and today. Solo again in the Medici Chapel, I blanched at the larger-than-life tombs of Cosimo and Lorenzo Medici, the power duo of their day, sculpted by their protégé and houseguest, Michelangelo.

Life on the streets in 2022 proved just as mesmerizing as life in the 1600s. Wandering without a plan led me across the famed Ponte Vecchio Bridge into Oltrarno, the working-class neighborhood on the far side of the Arno River. Leaving behind the masses of tourists, I had the streets to myself.

I bargained for curios in dusty shops, stopped for an alfresco lunch of tagliatelle noodles with wild mushrooms at an outdoor table, paused for vino at another square while watching kids chase pigeons. As dusk descended, I made my way back to the tram station and my apartment, wishing—I admit—I were one of the couples marching two by two to dinner.  Loneliness gave way to hunger, so I headed to the neighborhood piazza and feasted on gnocchi with walnuts, pears and Gorgonzola sauce and a large glass of vino rosso. Life was good again.

Another advantage of travelling in this like-minded group was that the clever folks organizing our schedules planned getaways by private bus into the Tuscan hills several days a week. We explored the winding streets of Cortona, the town of “Under the Tuscan Sun” fame; the shell-shaped piazza of Siena, where tournaments are re-enacted in front of its fabulous (more art!) cathedral; the traffic-free streets of Lucca, enclosed by walls you can surmount to patrol the city; Chianti country for a wine tasting; a peep at ancient Roman and Etruscan sites atop Fiesole’s hills. And, as they say, more!

It wouldn’t be Europe without challenges to add to the drama—first, a strike by transportation workers in Florence, then, more daunting, another one shutting down the airport in Paris through which many of our return flights were channeled. But the food alone—never mind the art—made up for the stress: a pizza night arranged by Inez: “Allora! The best pizzeria in Florence!” she promised (one taste and no arguments from us); a feast of the famous Florentine beefsteak born of the region’s special cattle; gelato at Perche Non? (“Why Not?”); and pastries at Gilli, aside the buzzy Piazza Republica with its revolving carousel.

Curious? To live like a local (with benefits), contact Smithsonian Journeys (855-330-1542 or www.smithsonianjournies.org), pack your bag and forget your diet.