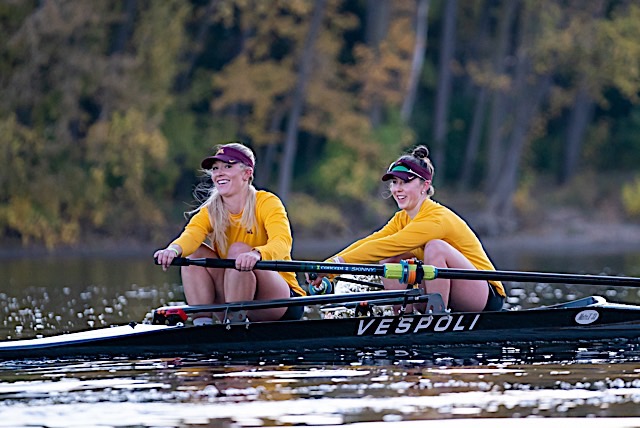 For many young people arriving on campus for the first time, college begins an identity-defining experience. This is moreso true for queer young adults, for whom college often entails coming out, exploring new relationships, and, most importantly, finding your people. It’s a difficult but rewarding journey, often made doubly troublesome by rigorous course work and extracurricular activities. But for incoming student-athletes at the University of Minnesota, with its highly competitive Big Ten athletics department, several LGBTQ-identifying students are paving the way for a better future.

Gopher Advocates and Allies, a group started in 2018 by former U of M Track and Field Athlete Dawson LaRance, is a relatively new, but much-needed space for LGBTQ+ student-athletes looking to find support, community and better mentorship.

“It’s such a unique experience,” says Meade Avery, a first year Doctor of Pharmacy Student and former member of the U of M’s Women’s Rowing team. Avery notes that the experience of coming out while training in a competitive college athletics department can make finding community a challenge, “the on-campus resources weren’t quite there [before]. For us, scheduling-wise, even being an athlete, you can’t really go to on-campus things.”

And queer student-athletes have more than one hurdle to overcome, the biggest of which is perhaps the largely homophobic climate in student athletic programs. According to the athletic inclusion program LGBT SportSafe, a staggering 84% of student-athletes have witnessed or experienced homophobia, 84% have received verbal slurs, and 70% find homophobia to be worse in sports than in society in general. Students looking to succeed in sports are faced with lose-lose options, enduring harmful social experiences and remaining closeted in order to compete alongside their teammates safely.

The Gopher Advocates and Allies, working with the U of M athletic department’s commitment to championing diversity and inclusion, is aiming to provide a much more welcoming community for queer athletes on the U of M campus. “I think this is a tremendous opportunity for us . . .” Peyton Owens III, Senior Associate Athletic Director for Leadership Development and Strategic Programs, Chief Diversity and Inclusion Officer for Gopher Athletics and advisor for Gopher Advocate and Allies remarks, “. . . [to focus] on opportunities for individuals to be their authentic self, every step of the way . . . to make sure that we maximize opportunities for you to come and to know that you are already more than enough. That you can be celebrated, and we can champion your voice and your authenticity and who you are.” Gopher Advocates and Allies is one of several programs under the Diversity & Inclusion Student-Athlete Leadership program, alongside the Black Student-Athlete Association, Gopher International, and W.I.L.L. (Women Invested in Leadership and Learning).

For someone like Anna Hansen, a sophomore on the varsity Rowing team and current Executive Leader for Advocates and Allies, what started as a group of about five members in 2018 (the group boasts about 20 regular members now) will hopefully be something much larger, especially in the wake of a global pandemic: “The visibility aspect . . . it’s a thing that we’re still really working on. It’s been an interesting struggle to try to figure out how to reach student-athletes . . . that are so busy and have their routine.” Hansen admits that they had the benefit of having Avery on the Rowing team when they first arrived, and they’re hoping that Advocates and Allies can branch out into other, typically insular teams to provide the mentorship that they were lucky enough to experience. “For me personally, it’s been huge to have this community . . . Coming in as a freshman during COVID, it was really difficult to try to make those connections and find those people.” Hansen is also a member of the Queer Student-Athlete Coalition, a “conference-wide LGBTQ+ group that meets weekly to share resources and advocate for better community-building.

Gopher Advocates and Allies meets the third Tuesday of every month, typically bonding over takeout provided by the Athletics Department (nothing says “undergrad students gather here” like the promise of a free meal). Attending members will find a casual space to connect with their peers and share their experiences and resources. Occasionally, members are treated to an outside speaker, and the group often travels together to external queer spaces, like Pride or a local drag brunch. Advocates and Allies has appeared on the court for Gopher Athletics’ Pride Night, handing out t-shirts and spreading a message of inclusivity. Students interested in joining can find more information on the Advocates and Allies university webpage.

For now, this new and steadily growing group is looking toward the future. “We’re figuring out how to make sure that this can be space for queer athletes in 10 years, not just for the next couple of years while I’m here,” Hansen confides.

“I’m mostly enjoying being the voice of support, [being] that older person to look up to that I was really looking for in my first two years of college,” Avery confesses. “Bring it full-circle for me, I guess. And bringing in people like Anna who are so good at this . . . I’m looking forward to what Anna and everyone younger than me is going to do with the group.”