The Second Time Around: Andrew Walesch 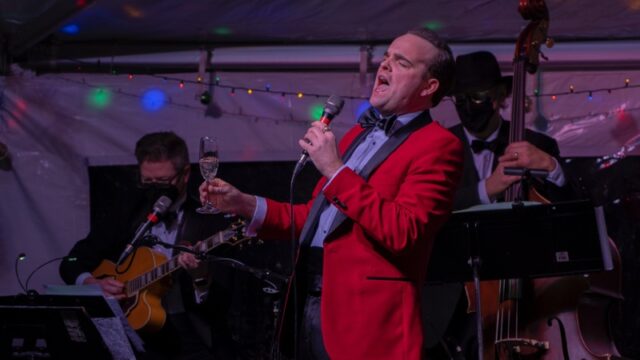 “Nobody hates Frank Sinatra,” says Andrew Walesch, the musical director at Crooner’s Supper Club in Fridley, Minnesota. For those who missed seeing the famous singer perform his iconic songs now have a second chance to experience the magic of nostalgia through Walesch. He says, “There are people that love Sinatra, and there are people that are not crazy about him. The same is true for many of the great singers of the Great American Songbook but nobody hates that music. People hate Country, people hate R&B, and people have strong opinions about music, but nobody hates Frank Sinatra.” Evident by Walesch’s repeatedly sold-out monthly show: Sinatra! with Andrew Walesch Orchestra at Crooner’s.

The recently renovated venue provides dinner and cocktail service with a classic nightclub vibe. When Walesch’s ten piece orchestra takes to the stage among a red velvet curtain backdrop, there is no mistake an enchanting evening is about to ensue. As the musical director at Crooner’s, other than himself, Walesch is focused on booking the best quality acts to create memorable and wonderful nights of music for people. He has been a champion in preserving those nights for musical artists and their adorers throughout the last few years. He has been integral in keeping Crooner’s Supper Club alive through safe and responsible adjustments to their operations, to keep artists working, and to keep us entertained during public health concerns.

Like many of the greats, Walesch’s musical superpowers revealed themselves at a young age. “I was always sort of a different kid because from the time I was five, I was in boys choir. I was always singing and I was always performing,” says Walesch, “God bless my mother, who was totally supportive of me and loved that I loved to sing and perform. She said, ‘You need to be doing this, this is your gift.’ ”

When he first heard the music of the Great American Songbook from artists like Tony Bennett, Frank Sinatra, Ella Firzgerald and Billie Holiday, “I immediately connected with that music, the songs, the singers, the style. This is me, is what I felt. How do I do this, how do I learn about this?” An all consuming fire enveloped Walesch as he immersed himself in learning the history and the performance of that style of music. Forged in that fire, a mind-blowing, consummate performer emerged and took to the stage.

Towards the end of his college years, he started performing in piano bars and working in nightclubs. Walesch has been described as “nurturing audiences in true nightclub fashion”, which is a whole different skill set than simply performing on a stage. In order to learn to do that, Walesch says, “Just like the old entertainers would tell you, and it’s true with anything in life, there’s no replacement for doing it.” After muscle memory set in and solidified his performer expertise, he realized, “It’s about the audience. Without them I wouldn’t be there, so I don’t look at performing as something that’s like ‘oh look at me, look at how great I am.’ It’s about their experience and I think that’s a very old school approach to performing.”

When Walesch takes to the stage at Crooner’s that approach is undeniable. In an intimate nightclub setting he’s not singing for the masses or his own gratification, rather truly for those in the room. Walesch says, “You look them in the eye, you tell them a story, you try to take them on a journey. If you can connect with people and really spend time singing parts of songs to them individually, that’s an experience that is really special for people.”

In his Sinatra show, Walesch and his ridiculously talented band succeed in leading a journey through a cleverly woven set list complete with musical and Sinatra history, anecdotes, and just the right amount of audience interaction. A truly astonishing part of the show is when Walesch asks for song requests from the audience. He then immediately proceeds to the piano to play and sing his rendition of the song from memory, pulled from the archive of thousands of songs in his arsenal.

Recently, the song The Second Time Around was shouted out. As Walesch performed the tune about returning love, about coming home, what settled around the room was a harmony of gratefulness. Gratitude that was not lost on anyone, for the performance of music from a lost artist, for the return to live music, and for all those second chances each has experienced in their lives.

The next day the requester sent Walesch a note about what that song meant to them and why. That reaction, a testament to Walesch’s talent, is a reward for the reverence he holds for this music. He says, “These songs written by the originators of American music, I think of them like the classical composers of Europe. They were so intentional and so studied about how to write a song and they crafted these incredible lyrics with these incredible melodies. I think the way that they wrote songs is something that is so unique and so unusual that when you hear these songs you immediately know.”

As long as Walesch is performing those songs, audiences certainly won’t be able to forget. Walesch will soon be debuting a Tony Bennet show, releasing a Cole Porter album, and going on tour.

“I feel that I’m carrying the torch of this wonderful music, which is an honor and a privilege,” says Walesch but, “with my own style, which is why it’s still fun for me. I’m not impersonating anyone. If I were, I think I would have gotten really tired of this years ago. But I’m able to do it my way, with my group; our way.” Pun intended.