The Long, Long Road From Kirmser’s to Lush 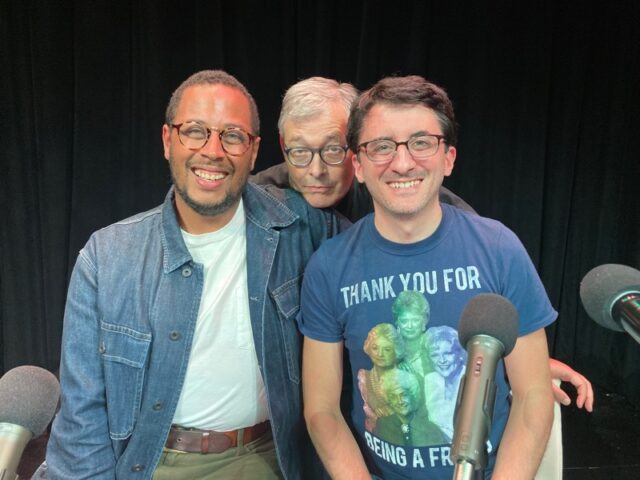 A long road still ‘a winding, for while we’re a long ways from 1946 Kirmser’s closeted gay clientele, there’s still many a mile to go. To that end, J.P. Der Boghossian (DARE Boh-goh-SEE-yahn) founded and hosts the podcast, This Queer Book Saved My Life!

“I didn’t want just another book podcast,” J.P. explained. “We need to tell and hear and read our stories. I want to hear about the books that saved lives, because if a guest shares their story on the podcast, there may be someone listening who needs to hear that story; who needs to read that life-giving book. Further, I imagined bringing the guest and the author of the book together would make for poignant and necessary conversations.”

Episode 1 premiered June 21 as guest Nancy Agabian nominated In The Dream House. Author Carmen Maria Machado participated, and their discussion explored the dark reality that abuse can occur even in queer relationships.

“Queer people need warning stories,” cautioned Agabian, whose own memoir, the first by a writer identifying as both Armenian and Bi, is Me as Her Again: True Stories of an Armenian Daughter. “Damn,” Agabian addressed Machado, “Why couldn’t I have read this when I was living this!” She describes the book as containing an archive of tropes about storytelling which allowed [Machado] “to both belong to the tropes, but also subvert them.”

Machado herself describes the parturition of In the Dream House as “passing a kidney stone,’ and “a wet baby giraffe.” You’ll find out why in the podcast, and you’ll learn about Agbian’s books as well..

Episode 2 Gary Nygaard chose James Baldwin’s 1956 classic, Giovanni’s Room, that focuses on a sexually conflicted American man living in Paris. Not part of the Podcast, this is Nygaard’s after-show reaction.

“I participated in J.P.’s podcast because I believe that by telling our stories we are perhaps helping others understand what it is like to grow up and live as LGBT people in this culture. Hopefully, they will see that we are just regular people, but also see the challenges that confront us when the environment around us is hostile toward us–whether truly so or merely perceived. And, I hope that someone of my age will help younger queer folk learn about our history of coming out in the 60s and 70s, and how much progress has been made, even though there is still much work to be done (or re- done ?).

Episode 3 Leslie Feinberg’s Stone Butch Blues (1993) was guest Suyane Olivera’s saving queer book.?“ This book made me cry so many times because I felt so aligned with our protagonist, Jess…It’s historical fiction about a working-class Jewish butch lesbian named Jess Goldberg…We see her growth throughout her entire life, from a young girl to her late 30s…we really discover what stone butches are. I just feel like every time I reread it I pick up something new that I didn’t see before.”

Episode 4 Paul Kaefer chose Quatrefoil: A Modern Novel (1950), James Barr’s seminal queer book wherein Kaefer realized, “I’m part of a community that’s always existed… Reading this novel saved me more in a healing way. Being closeted for a very long time and not being exposed to literature with LGBTQ+ characters, this was part of my journey for finding my community. It was a really cool novel because it’s historic and did have a very positive storyline.”Kaefer, a Data Scientist, is co-vice president of the Board at the eponymous Quatrefoil Library (q library.org)”

Episode 5 Zaylore Stout, his innate cheer and enthusiasm shining through, tells why he nominated Richard Carlson’s Don’t Sweat the Small Stuff and It’s All Small Stuff. Stout relates how Carlson’s book helped him create his own 2019 book, Our Gay History in 50 States. “I grew up very anxious, and kind of a perfectionist. If things didn’t work out as planned, it would stress me out to the M degree. I stumbled across it…and [thought] this makes sense.” On a road trip he conceived the idea for his Our Gay History book to represent the LGBTQ community living daily lives in every state. A similar book in progress will spotlight Black lives nationwide.

Episode 6 Legal advocate Ellie Krug chose Jennifer Finney Boylan’s memoir, She’s Not There, for its influence on Getting to Ellen: A Memoir About Love, Honesty, and Gender Change. Prof Boylan her memoir was the first bestselling book by a transgender American.

When Boylan commented, “Looking at it now,” I think there’s a little bit of apology to the book…a certain sense in She’s Not There of trying to justify myself,” Krug assured, “But your book helped me believe maybe I could write a book… it helped me to pivot. On the night of 9/11, I realized that unless I was brave, unless I did what I needed to do, I’d lie on my deathbed and consider myself a coward.”

Asave, lead organizer of Visibility Impact Fund, the first grassroots grant-maker to provide dedicated funding to bi+ communities, searched for years before finding Bi America. “Bills book gave me a look into seeing and understanding that there’s a Bisexual community that’s distinct from a broader LGBTQ community…there’s a lot of information about what it means to be Bisexual…learning all about the concept of community that identifies as Bisexual.”

Of his own experiences with the gay community Burleson said, “They didn’t believe me in any way. They were not supportive of me in any fashion, shape or form… Very little writing about [Bisexuality] was happening and it seemed like in many ways the community was going away…I decided to write a book. I wanted to write about the community and, if nothing else, preserve this time in history.”

Episode 8 Lara Lillibridge’s life-saving book was Alison Bechdel’s Fun Home: A Family Tragicomic. From it, Lillibridge learned, “You can tell your story and live,” citing Fun Home as “the book that made me OK to write about my queer family. I had never seen anything at all like my family in a book.

“I was raised by lesbian parents. One of them was mentally ill, so I didn’t have a happy childhood story. I felt, as a writer, tremendous pressure to show gay families, particularly the Lesbian families, in a positive way. … We saw [the musical] and I nearly burst into tears with happiness to just see something like my family. Lillibridge’s first book was Girlish: Growing Up in a Lesbian Home.

“There’s something monstrous,” Bechdel mused, “when you turn people in your life into characters. There’s no way around that. It’s an aggressive act no matter how loving or well-written it is… My own coming out was completely through books. Fun Home is like a book about Queer books that saved my life.”

Episode 9 Guest David LaRochelle, then a fourth-grade teacher, wrote A Christmas Guest in 1988 – then 30 more, including Moo, How to Apologize, and the YA novel Absolutely, Positively NOT! Larochelle found Jan Morris’s 1947 Conundrum, if not life- saving, at least a bright beacon by which to sail.

“Jan was born James in 1929. She was born into a male body but realized that it was not the right body for her, and that she was, in fact, a woman inside. On one hand, this book taught me a lot about transsexuals* but the bigger impact was the feeling that just because I don’t experience something doesn’t mean that it’s not true… because I have never felt that way doesn’t mean that nobody feels that way. I took this mindset from this book and I have applied it throughout my whole life.

Primarily a children’s picture book author, he did write one YA novel with a gay character. “Absolutely, Postively NOT! was a humorous novel about a sixteen-year-old boy who was absolutely, positively not gay, or at least that was what he was telling himself. I was trying to write a funny story, and the main character just happened to be gay. It ended up being a very positive experience to take so many of the things that happened to me when I was growing up, and those feelings which were so challenging, and a lot of tough times, and turn them into something that was positive.”

Episode 10 Michael Barakiva speaks with April Daniels, author his chosen YA novel Dreadnought. A Director and YA author himself (One Many Guy and Hold My Hand) Barakiva runs Funded Novel Readings, supporting writers, even providing professional actors so authors can hear their words.

Set in an alternate present, Dreadnought’s Danny is transgender, having gained her powers after superhero Dreadnought falls from the sky and dies before her. His superpowers cause her transition from male to female.

As to “saved,” Barakiva explains, “In spite of how LGBTQI has been lumped together, I am a queer man with a very strong gender identity. I know very little about the trans experience. Reading this book was incredibly educational for me. The way April taps into the fury of her protagonist, Danny, and something about the honesty of her anger and the challenges that she faces helped me come to terms, in really profound ways, about my own coming out process that I don’t think I had processed fully.”

Of her craft Daniels says, “Writing was an escape for me. It was a way for me to take control. Coming to terms with the fact that writing is an act of pure control but publishing is an act of relinquishment, because I let it go, it goes out into the world and then it’s not fully mine anymore.”

Barakiva asked, “I’m curious about how the sociopolitical alternate present that you created was formed?” Much fruitful discussion followed, which you can follow in its entirety on thisqueerbook.com.

A celebratory podcast party and live–openly gay– audience at Lush closed season One. James Darville, Policy and Organizing Director at OutFront Minnesota discussed his chosen book, The Evening Crowd at Kirmser’s: A Gay Life in the 1940s (Lavender #713 “Books”), by the late Ricardo J. Brown.

“What Ricardo and his friends had to go through was not all that unfamiliar to me as a queer person living in Fargo, North Dakota in 2015. We still had to find our little places our little crooks and crannies to hang out, and dating was still really weird.” Season Two debuts 4 October, and Lush transcript will be available October 18 at thisqueerbook.com. Access existing transcripts and/or sign on to share your own queer life-saver.