The Dayton’s Project Holiday Window Displays: A Nod to the Past with Eyes on the Future 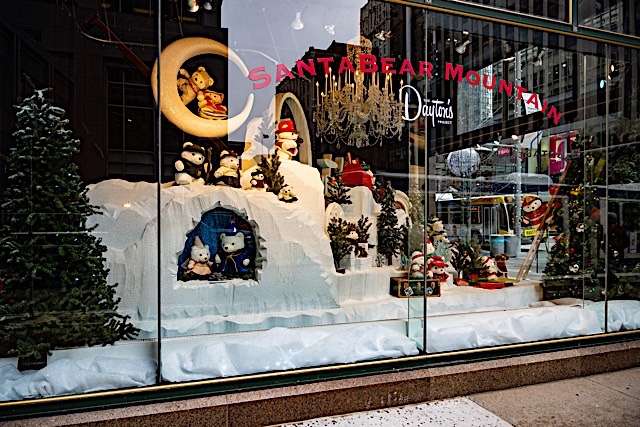 Imagine, behind a huge pane of glass, a miniature mountain-scape covered in sparkling synthetic snow; small white bears in cheery attire in heartwarming scenes, all posed beneath an elegant 1940s chandelier. Nearby, animatronic characters from Charles Dickens’ A Christmas Carol have been arranged—the very same paper mâché creations that had premiered at this location back in 1967. This is the spectacle that opened November 18th at the site of the former Dayton’s department store, now the Dayton’s Project. It’s a blast from the past, and the company hopes that it’ll be one part of the many attractions it hopes to feature in the coming years.

The Dayton’s Project, which set out to revitalize a core piece of Minneapolis architecture in 2017, had set its grand opening for the Spring of 2020—but was put on hold during the pandemic. Even before construction began, the Project had big shoes to fill. The Dayton’s department store had been a fixture of downtown Minneapolis for a good century before being replaced by Marshall Field’s in 2001.

The property changed names again in 2006, this time to Macy’s. Macy’s would last for 11 more years before closing, at which point the Telos Group and 601w Companies created the Dayton’s Project development team. The goal was to create a new realizing of the building’s potential, retaining and restoring many of the original features while adding a modern flair.

Now with shops and venues all around the city preparing for the seasonal rush, the Dayton’s Project joins the stage with an iconic holiday display—as well as a new pop-up style makers market that offers everything from clothing, jewelry, and handmade soaps to incredible Indigenous art. The window displays (which are best visible on the corner of Hennepin and 8th St South), like the rest of the project, were several years in the making.

“Very early on there was talk about what to do with the windows,” says Kent Hensley, the creative force behind the displays. Hensley has a long history with Dayton’s, first as its Art Director in the mid-80s, to Creative Director for Marshall Field’s. But according to Hensley, the retail landscape changed dramatically around 2001. He explains that the focus for retail windows became more utilitarian and commercial—showing off new products in the store, rather than any kind of artistic flair.

“The change in the industry only makes this project more unique,” he adds. The windows don’t show off any merchandise that can be purchased inside, but rather just showcase the kind of whimsy that these windows were once famous for. “I think the windows right now are a very generous invitation to come downtown.”

Along with that invitation, there seems to be an unspoken promise with these displays. By evoking images of the past, the windows seem to attest: ‘we had this before, we can have it again’. Whether ‘this’ means holiday cheer, being around family, or even just a sense of community, there’s something warm and comforting about that promise.

“It is a huge step of optimism in my mind,” Hensley says. “It’s hard to talk about the obvious, which is downtown has had a tough time. And we all have had a tough time with the pandemic, but our city has also had a lot of social thinking to do.”

The twinkling lights of the displays can’t erase the hard years we’ve had, but they can remind us of the good times, and hopefully that can help us figure out what we want our futures to look like. Both as individuals and as a city.