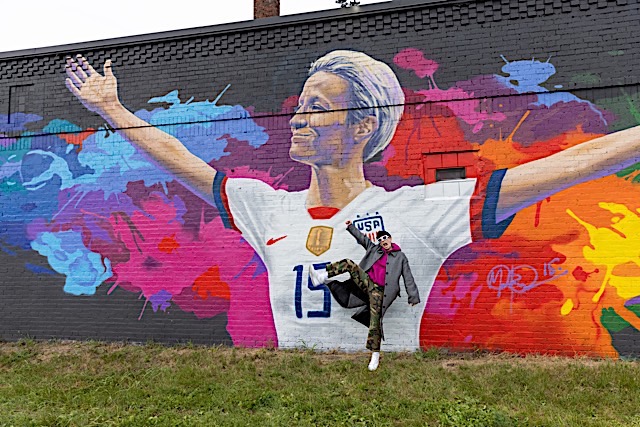 On Saturday, July 30 at Allianz Field the Minnesota United FC will be playing their annual Pride game against Portland Timbers. For soccer fans and pride celebrators alike there is a neighborhood bar serving both niches.

The Black Hart in the Midway neighborhood of Saint Paul is “the new spiritual home for soccer in the Twin Cities” and it’s located a mere thousand feet from Allianz Field. With major ties to the MNUFC’s Supporter Groups, not only can you tune into matches of the Loons and MLS at Black Hart, you also don’t need to be shy about asking for any international game to be put on the screen.

As the hub for soccer fandom in the Twin Cities, The Black Hart hosts watch parties, fundraisers, and events to celebrate the sport and to honor the tradition of “proactively supporting progressive beliefs of inclusion and advocating for LGBTQ visibility in sports.” The Black Hart names its own patron saints consisting of drag queens and famous soccer players, like Megan Rapinoe, whose portraits go on the walls. They also host pre and post game parties, as well as a shuttle to TCO Stadium for Minnesota’s women’s soccer team, the Minnesota Aurora.

The Black Hart of Saint Pual is the revitilzation of the former LGBTQ bar Town House. Wes Burdine took over as owner in August of 2018. He says, “come to a place that celebrates soccer, celebrates LGBTQ culture, and celebrates people in different ways. You can go to a soccer game and afterwards, come to a drag show. Where else in the world does that happen? That’s a way we want to foster this unique culture.”

On top of soccer, The Black Hart offers trivia nights, karaoke, darts, and billiards. There are also regular drag, burlesque, and circus-type shows with a more intimate setting featured on an integrated stage and dance floor. Burdine says, “People coming to the space are feeling vulnerable and open to expressing themselves. It’s a pretty infectious thing and it’s a really wonderful thing for me to sit back and just watch LGBTQ liberation. The ability to be oneself is an infectious thing that everyone can learn from.”

As many of us know, that liberation didn’t come without a price. For The Black Hart specifically, and the building it inhabits, its story and history are charged with drama and conflict. Starting as a cleaner and dryer, it was turned into the Tip Top Tap, a jazzy lounge and supper club during the forties, and renamed the Town House in 1949. Many establishments in the area experienced hardship leading up to the sixties but Town House was revived when the current owner converted it into one of Saint Paul’s only LGBTQ bars in 1969. Regulars are reported to have been extremely shocked when they arrived to discover the unpublicized transition.

The seventies were highlighted with a feud between the female patrons and the male patrons, along with management, that included sit-ins, picketing, forceful removal, and a court case with female victors. Then long time employee Holly Monette took over ownership in the eighties, and the bar went on to survive a country western phase, and the impending doom of the construction of the light rail. The Town House avoided demolition but business was never the same. When Monette was ready to retire, the phone call from Burdine was, “the phone call she’d been waiting for.”

Burdine knew that taking one of the oldest LGBT bars in the city and turning it into a soccer bar, “was a nonstarter.” Through his conversations with Monette the concept to integrate the two into The Black Hart was formed. Burdine reports, “One of my closest friends said, ‘are you prepared for how gay your life it’s about to get?’ You can’t half-ass get involved in creating an LGBT space and conversations like that helped me really understand there’s a big difference between being an ally and trying to create and foster a space.”

The central premise of The Black Hart is to have a safe place where everyone can feel free to be themselves. Alike are the sports fandom and the LGBTQ community in, “you get together, you commiserate, and you celebrate being around one another,” says Burdine, “That’s the affirming stuff that really gives me a lot of joy and all the warm fuzzy feelings, because we took it for granted for a bit, maybe, and then we get to see it come back and realize, that’s why we did it.”

With the stadium’s construction complete and MNUFC’s third season there underway, it seems it was a perfect combination. “I wanted to do this because I knew that we could create something special that was more than just about being sports fans.” says Burdine, “but about harnessing the power and the energy of being sports fans into something bigger that advocates for inclusion of all types.”