Swedes Along the Mississippi 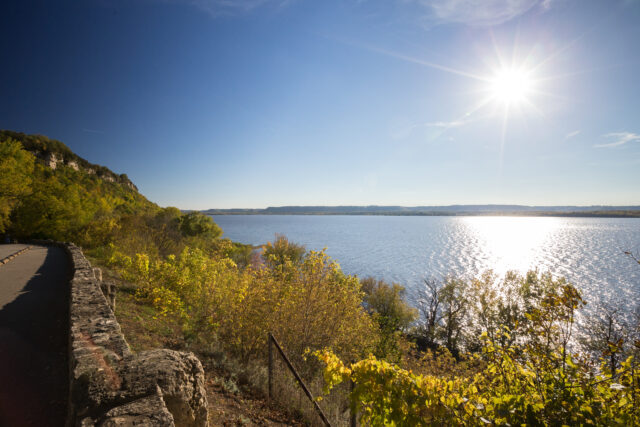 Stockholm (pop. 97) is a blink-and-you-miss-it settlement hemming the Mississippi as it widens to become Lake Pepin: no gas station, no convenience store, no ATM on the  corner—but an old-time hotel and dozens of specialty shops displaying locals arts and crafts and foodstuffs. A historical museum, even.

But all those storefronts were standing empty till the ’80s. What gives?

Today, Stockholm is the crown jewel in the diadem of towns along the Great River Road, a.k.a. Hwy. 35 S, rollercoastering along the river—a highway the tripmeisters at Rand McNally rate as one of the Ten Most Scenic Drives in the nation. Stockholm has been transformed from a near-ghost town not so long ago into an artists’ colony, rich with painters, potters, weavers and those of other creative stripes, who live, work and sell their endeavors here. The itty-bitty village boasts spring and fall Art Tours plus a juried Art Fair in July drawing 8,000 people. Between those “official” art-forward gatherings, galleries and shops are open weekends May through October, and many keep more expanded hours.

What drew the new wave of immigrants? The most reliable guess is that, back when the arts movement first took hold in the ’80s, land here was both cheap and beautiful. One artist ventured a studio, then others of the romantic, “back to the land” school, followed suit.

The town is bookended by two historic highway markers that capture layers of its early history. On the north, one pinpoints Maiden Rock, that limestone bluff towering directly above the highway, where a Sioux princess, forced to abandon her lover and marry another, leapt to her death. The southern marker commemorates the site of Fort St. Antoine of 1686, which staked claim by French explorers in the name of Louis XIV to “all the land west of the Mississippi no matter how far.” Well, the English thought otherwise and took control in 1783.

Fast-forward to 1851, when immigrants arrived from Karlskoga, Sweden, and founded a settlement they named for a beloved icon of their homeland. They farmed and they fished, just as in the land they came from. Here, where the Mississippi widens into Lake Pepin, they built a miniature town hall, post office, hotel and many of the shops and cottages that still form the community.

Cherishing that heritage today, the Swedish flag of blue and yellow flutters above many a doorway. Blossoms tumble from sky-blue flowerboxes, and blue bicycles glimmer from bike stands around town, beckoning visitors to hop on for a complimentary spin. Community flower gardens with inviting benches encourage lingering in the “business district”—a fancy name for a single intersection, truth to tell. A shopkeeper, in what was once a hardware store, has witnessed the transformation. “When I moved here 40 years ago,” she says, “there was not a thing.” Other oldtimers, like the host at Great River B&B, gives credit to the Harbor View Café in Pepin for drawing traffic down an otherwise deserted road. And once the first artist saw the cars whiz by, well, the rest is gorgeous history.

That B&B occupies the oldest house in Stockholm, built by the town’s founder in 1869, anchored by 20 acres of forest and pastureland—“a diamond in the rough,” recalls Leland Krebs of the homestead he took over in 1985; when farming became too laborious, he converted into a B&B.

It’s the most beautifully suited-out—and private—B&B I’ve ever stayed in. And the only place I’ve ever slept where—safe and sound—doors are never locked. While the house has two guest rooms—the Calvin Coolidge and the Millard Fillmore (don’t ask; they didn’t sleep here), only one of the two is rented at a time—thus, total privacy. The genial host checks guests in, inviting them to sample a cache of CDs and a wonderfully expansive book collection, then disappears until time to start the breakfast coffee—excellent, by the way, from Great River Roasters in Pepin—served with juice, fruit and muffins warm from the oven: none of those four-course extravaganzas that land you back to bed.

The house is furnished in modern Swedish design (think the collectors’ originals that IKEA knocks off) accented by antiques, such as the ornately carved wooden bedstead in the Coolidge, a room spacious enough to accommodate two cozy armchairs before the fireplace, a writing desk, and books stacked in a tower higher than I could reach.

The second room contains two butter-yellow twin beds. Both capture the sunshine through many-paned windows set into deep walls; or retreat to the porch to catch the morning rays. Follow a path through the apple trees to the meadow above, where a bench invites lingering for contemplation, a place where deer and turkey wander. Freight trains rampaging through town hoot haunting warnings into the night.

Spring Street Inn, the only-slightly-gentrified occupant of the former Merchants’ Hotel from the 1880s, offers cozy rooms and a romantic sunken bird and butterfly garden.

Bogus Creek Café & Bakery occupies a tiny, antique farmhouse, but in nice weather everyone chooses an umbrella table on the patio, where the sound of trickling water makes the absence of Muzak a double blessing. Nearby Bogus Creek got its moniker, the story goes, when a counterfeiter, in fear of imminent raid by the law, tossed his fake coins into the stream.

Its proprietor was drawn, she explains, by “the zeitgeist, a special feel about the town as a place people take their time and relax, where life is simple. And where the local talent is phenomenal.”

No Wisconsin fish fry, she points out. Instead her creative menu segues from salmon cakes with poached eggs and fruit for breakfast (served all day), a sassy breakfast burrito, or Swedish pancakes heaped with lingonberries and whipped cream. Fresh breads and pastries to-go, too.Talk about one-stop gluttony! Stockholm Pie & General Store acts as an enabler for entire carloads of foodies, who come for the panoply of filled crusts—bumbleberry to triple chocolate pecan, and stay for the candy counter and lode of specialty local foods.

If only she were open in the evening.

Fortunately, Gelly’s is. Gelly’s Pub & Eatery is the current occupant of a former Texaco station, and, as my server noted, “the only place around here open seven days a week year-round.” Here’s where you’ll find that Friday fish fry, along with burgers and steaks. Outdoor patio, too. Expect occasional businessmen masquerading as Harley dudes ordering Miller Lite at the bar.

But what you must do—everybody does, so be prepared to wait for a coveted table—is head six miles downstream to Pepin’s Harbor View, since 1980 the cult “foodie” café of the Mississippi. No fish fry here either, believe me: instead, seafood tends toward poached halibut, grilled opah, and my frequent choice, walleye, served with shrimp in a dill cream sauce along with wild rice, sugar snaps and cranberries. With portions on the mammoth side, it’s useless to say “Save room for dessert,” but do, anyway. My favorite (and everybody’s) is the Georgia walnut pie, laced with more than a little bourbon from its neighbor state. The wine list alone is worth the drive. There’s a cheery din to the unassuming storefront, where you can spot first-timers by those little black dresses that have no business here. The bad news is, they do not take reservations, so grab a glass of vino from the bar and settle down outside to watch the trains streak by.

Stores, branching one block in each direction of Stockholm’s main (okay: only) intersection, include establishments housing art, jewelry and home décor treasures, ladies’ wear, gift and home accessories, Amish furniture, pottery and used books, as well as these prime venues:

“What are you doing here?” I ask co-owner Steve Groms.

His answer: “We came camping every weekend and we hated to go back to the city every Sunday night. The place gets in your blood.”

Out of the Blue Gallery concentrates on local art photography and prints, books on the region and cheeky gift items, while Clementine proffers live flowers and delectable antique furnishings sold in the town’s former garage.

Palate stocks elite kitchenware and edibles, and offers cooking classes-cum-dinner parties, often led by Harbor View’s chef. For more local yummies, check out the Good Apple, stocked with all sorts of apple products and themed kitchenware, as well as Wisconsin wine and cheese. Or travel two miles up the hill to the home orchard, featuring 50 varieties, to smell the blooms or pick you own in season. Ingebretsen’s, housed in a sweetly renovated hardware store of 1878, proffers all manner of fine Swedish crafts culled on shopping expeditions to the motherland, including knitwear, blown glass, Sami jewelry, embroidery, pottery in medieval designs and Christmas ornaments. No kitschy trolls, no Ole and Lena t-shirts

Stockholm Gardens stocks herbs, annuals, perennials and trees, as well as garden pots and ornaments. Their inviting community garden in front is their best advertisement.

Hike uphill on Spring Street to the town’s old cemetery, where peonies and tall cedars guard gravestones with inscriptions like “Carl Lind 1886-1906” and “Johnson, Lars and Anna, 1886-1936” among the Helbergs, Nords and scores of other Swedish names.

Grab a blue bike to pedal to the Public Park fronting the river, with its long, concrete pier thrusting into the waves aside a sandy swimming beach, to watch the sailboats or the eagles (camping permitted). Or tour the back country roads known as Little Switzerland.