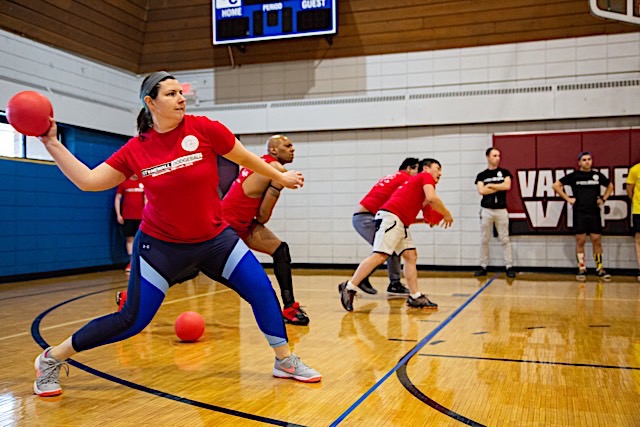 “Some people fear the game, because it involves being hit with a fast-flying ball,” the Commissioner acknowledges. “As a young kid playing during school recess, this might have been a traumatic experience. Even as an adult, it’s an acquired taste.”

Happily, the feared game has nothing to do with such playground horrors as unpocketed frogs or strategically placed firecrackers or even South Korean squids—no, the feared game is dodgeball, but not to worry: the “acquired taste” referenced above is purely metaphorical, at least in this instance, as the uniquely echoing, Godzilla-sized clown nose that defines the sport should never be near any given player’s pie hole. “We use a soft rubber ball, and throwing at a person’s face is not allowed under any circumstances,” the Commissioner assures. “Players caught ‘headhunting’ are removed from the game.”

The Commissioner is Ore Lindenfeld, board member of Stonewall Sports Minneapolis and possessor of the most Minnesotan name this side of Ole and Lena. “Stonewall Sports Minneapolis was created and is intended to provide a safe space for LGBTQ+ people in the Greater Twin Cities area to have fun and be themselves,” says Lindenfeld. “However, we are not exclusively an LGBTQ+ league. We do not discriminate, and we do not tolerate discrimination. The league is open to people of every race or ethnicity, gender identity, sexual orientation and age, so long as they agree to respect one another.”

The Minneapolis chapter is one of two dozen urban manifestations of the national Stonewall Sports. “Stonewall Sports is an LGBTQ & Ally community-based, non-profit sports organization founded in 2010 that strives to raise funds for local non-profit organizations,” the national club’s website pronounces. “Our league values each player for who they are and what they bring to the league’s community.”

Stonewall Sports’ dodgeball is considerably less sadistic than intrusive recess memories might dictate: two teams employ six rubber balls; each member (eventually) throws one (or more) at an opposing team player, hoping to strike and jail said opponent—but in doing so, the thrower runs the risk of said player catching the offender’s throw, eliminating the aspiring eliminator. It’s kill or be killed, plain and simple, only without the killing. Catalogs the Commissioner, “Our dodgeball league consists of players who are doctors, lawyers, professors, accountants, first responders, front line service workers, and so many other professionals who are looking to take a break from their busy lives and have some fun!”

That fun manifests even before the players take the court. “We have some very creative captains and co-captains,” Lindenfeld notes. “Each team gets to select its own name, and I would love to be a fly on the wall to hear those conversations. I love all the puns and innuendos, and every season I look forward to seeing the new names.” Players sproinged into dodgeball jail might take some consolation from being sent there by a member of Drop Dodge Gorgeous, Blue Ballers, One Dodge Wonders, Ball Me Maybe, or Not in the Face.

Just as it precedes a player’s time on the court, that sense of fun can follow the player away from the game as well. “Joining Stonewall Sports Minneapolis helped me meet so many great friends, which is something I want for everybody,” says Lindenfeld. “It can be a great opportunity to network with a diverse group of people for whatever reason suites you.”

Of course, the realities of a persisting pandemic dim an uncritical sense of diversion on the dodgeball court. “We take the health and safety of all our players very seriously,” Lindenfeld insists. “We have been evaluating guidance from the CDC, health authorities, local officials, and our sports venues to make informed decisions on how we move forward with current and upcoming seasons.”

Such an excursion may even replace half-traumatic childhood memories with wholly pleasant adult ones. “Many people remember playing dodgeball as a kid,” the Commissioner concludes. “They don’t know that adult leagues exist, so they still view it as a kids’ game. Let’s give kids some credit; they know how to have fun! We’re keeping the fun alive for adults.”