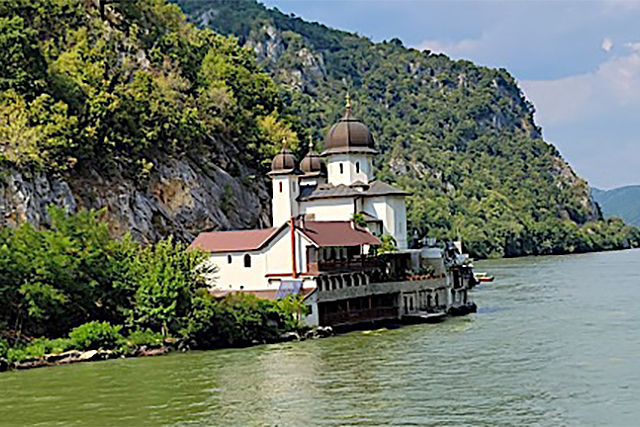 It’s breakfast time, but I can’t smell the eggs Benedict. And where’s the cappuccino? Oh, that’s right. That was yesterday—and every morning on Viking River Cruises’ meander down the Danube. Today, I’m home—back to reality and time to start planning my next cruise, where I’ll again be treated like the goddess I was surely meant to be.

Aboard the 160-passenger ship Ullur, perks included premier toiletries in the bathroom, where my toes rested on a heated floor. Swans swept past our balcony as we sailed down the Danube. Comfy chaises lined the sundeck, meals proved worthy of Michelin stars—including complimentary wine and beer, seguing into the evening entertainment in the lounge. It’s tempting to remain onboard 24/7—but not with the Balkans’ picturesque historic towns ready to welcome us via daily excursions.

We glided through five countries in 10 days. At every stop, locals welcomed the return of tourism to their COVID-besieged economies. Thorough daily testing onboard, vigilant cleaning and mask-wearing made us feel secure.

First port of call: lively, lovely Budapest, whose mood is always vivace. As trams slithered past, we began our stroll on wide, tree-shaded Boulevard Andrassy, ogling its parade of upscale shops (Rolex, Gucci) and wedding-cake Opera House. But first, a stop at St. Stephen’s Cathedral, all tawny marble, to spy the relic of the saint’s own hand encased in a golden casket.

Along Andrassy, a frontispiece of heavy chains marked the House of Terror, a museum documenting past repressive regimes (first the Nazis, then the Soviets) through oral accounts, newsreels and photos. A pleasanter detour took us past the Franz Liszt Music Academy clasped by the necklace of sidewalk cafes lining its leafy median. We paused to savor culinary icons straight out of grandma’s cookbook, like goulash and chicken paprikash alongside elegant temptations crowned by goose liver pâté.

In the Jewish Quarter, two synagogues (one, the largest in all of Europe) remain after the pogroms of the ’40s; both welcome visitors. Take a break at nearby Spinoza Café, offering klezmer performances accenting delicious kosher fare. But the Danube’s bank hosts a more somber note: a line of shoes, cast in bronze, where Nazis forced Jews to remove them before their execution in 1944. Nearby, postcard-pretty Parliament, the city’s most famous silhouette, is still pocked with the bullets of the short-lived 1969 revolution.

We set sail after dinner (salmon, chateaubriand, local goulash: Take your choice). As we slipped under twinkling bridges and Parliament, all ablaze, the ship’s crew plied us with flutes of champagne. By morning, after the first of my daily jogs around the deck and a wave from the captain, we docked to visit Kalocsa, a medieval town set amidst sunflower fields, to enjoy an organ concert in its petite Baroque cathedral (surprise encore: “The Star Spangled Banner”). Next, a Hungarian-style rodeo starring some daredevil, whip-cracking riders and bored cattle; then a visit to an ancient fortress and 18th-century church, whose severe exterior gave way to blazing chandeliers and golden altar.

By morning, we’d slid into Croatia, where we awakened in Vukovar, “the poorest city in the country,” our guide declared, pointing to the bullet holes that destroyed the town during the war with Serbia in the ’90s. Penetrating beyond the land’s more-visited seacoast cities, this river cruise reaches deep into the lives of real people. We enjoyed tea and cherry pastries at the home of Sara, 35, who spoke openly about the harsh war years, when once-neighborly Serbs destroyed the entire town. (We’d land in Serbia tomorrow and hear their side of the story.)

Welcome to Belgrade and the Cyrillic alphabet, rendering me illiterate. Serbia’s capital city, boasting pre-Roman roots, was part of the Soviet bloc until 1948, then ruled by “soft” communism (“Coca-Cola communism,” they joked) under war hero Tito. We strolled its main street, Prince Michael, peering into brand-name shops. As the temp hit (gasp) 100°, we continued our meander past Parliament—once requisitioned by the Nazis, then Tito, and today home of the government.

Back onboard, and after another amazing dinner (my choice: Caesar salad followed by crab cake, ahi tuna, cheese plate and banana ice cream), we set sail under city lights. My companion noted our step count for the day: 17,000.

Sharing the river with churning barges, pleasure boats and lazing swans, we entered the widest stretch of the Danube and docked at Golubac, offering another turreted fortress to explore—“unconquerable, except by starvation”—and prepared to navigate the upcoming Iron Gorge, “the most dangerous stretch of the river.” It’s a narrow passage indeed, lined with sheer cliffs of wrinkled rock. Peer at the inscription left by Roman Emperor Trajan to commemorate his own passage. As we framed our photos, the crew passed amongst us with celebratory mojitos.

Next stop: Bulgaria. It’s perhaps the most un-visited of the Balkan nations, and by all accounts the poorest and least-developed. (“Our pensions are even more tragical,” intoned our guide.) And that’s also what makes for a compelling portion of our tour.

First we bused through more sunflowers to Belogradchik and its intriguing rock formations (yet again the Romans beat us to it) and a steamy, breath-sucking climb. Passing dreary, Soviet-era apartment blocs at Vidin, we docked parkside, near its redbrick 18th-century synagogue, today in ruins. Behind it we peered into a shadowy, Eastern Orthodox church rich with silver- and gold-framed icons, passing a graceful mosque and, yes, yet another antique fortress.

Boarding buses to Veliko Tarnovo, a capitol in the middle ages and crafts center of the country, we continued on to Arbanasi, rich with medieval architecture, to visit the home of an affluent merchant circa 1750. Every ceiling danced with carved-wood beams, sheltering rooms laden with treasure chests and patterned carpets.

The town’s Church of the Nativity of 1597 is a kaleidoscope of complex frescoes livening every surface. They spell out Bible stories and a religious wheel of fortune (lacking Vanna) that predicts your personal delivery into heaven or hell. It’s magnificent: an artistic highlight of our journey. Which is nearing its end (insert sobs here). We say goodbye to our ship in Romania—home of Dracula— just outside fabled Bucharest.

Think that vampire’s bad? A more recent megalomaniac, Communist leader Nicolae Ceaucescu, took the prize for stifling his nation until his death in the famed Revolution of 1989. Revolution Square, heart of that action, today hosts monuments to freedom fighters among the bullet holes still stippling the Parliament Building and the charming Eastern Orthodox Kretzulescu Church of 1722 across the street. The former Royal Palace of 1866 now serves as the city’s art museum—a treasury of mesmerizing dark-eyed medieval icons rescued from the many churches Ceaucescu destroyed.

Farther along the main drag, Victory Drive, “the Champs-Élysées of Bucharest,” lurks another Parisian wannabe, Ceaucescu’s Arch of Triumph—this one, seemingly assembled by IKEA of plywood and plaster.

Never mind: Mr. C vowed to outdo anything the Free World had to offer by building the Palace of Parliament with over 1,000 rooms—the largest government building on the planet save for the Pentagon. Begun in 1984, it’s still unfinished. So is the vast Cathedral behind it, draining money, angry citizens claim, from needed infrastructure.

Mr. C flattened residential areas in the name of progress; yet some remain, from the dreary Communist-era apartments to those lining Old Town’s historic streets (today blessedly pedestrian-only).

It’s the place to be—to wander cobblestones flanked tiny arts and crafts shops and countless cafes with alfresco seating to watch the world go by while nursing a $2 beer. Succumb to the charms of its many Orthodox churches, such as Stavropoleos—petite but potent with saints painted, inside and out, on every surface. Peer into the barrel vault, and there’s Jesus. Approach the altar, glowing with saints and disciples, and there he is again, flanked by Mother Mary, whom devout believers approach to kiss.

Next day we discover the city’s Jewish District, now a shabby, forgotten neighborhood, which once held half a dozen synagogues. A Holocaust Memorial gives testament to documents which show that no country outside Germany itself was responsible for more Jewish deaths.

For a lusty farewell dinner, we chose the mega-popular beer hall Caru’ cu bere of 1870, which wouldn’t be out of place in Munich. As I await my order (stuffed cabbage leaves aside polenta crowned with sour cream and a lethal-looking pepper), costumed folk dancers prance through the hall.

We head to our hotel, overlooking Ceau?escu’s thousand-room Palace of Parliament, to pack our bags and start dreaming of our next Viking cruise. To chart your own adventure, check out river cruises at www.Viking.com.