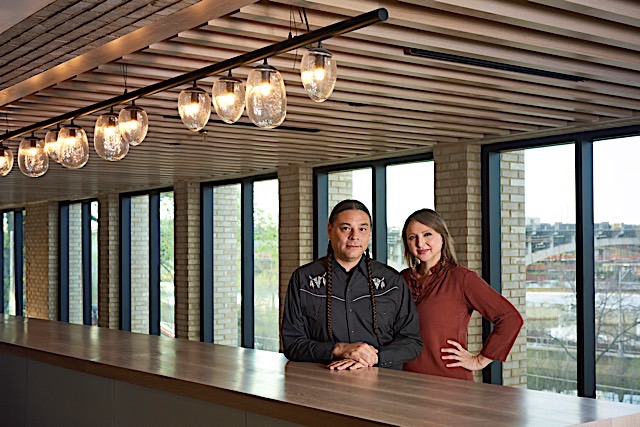 At last! The wait for the long-anticipated and profusely publicized Owamni, fathered by Sean Sherman, aka The Sioux Chef, is over. I’ve watched it being painstakingly reconstructed from elements marking the riverside home of the former Fuji-Ya and, before that, site of Native ceremonies. The restaurant’s expansive second-story vista captures views of the mighty Mississippi near the Stone Arch Bridge.

The slim, contemporary space is dressed in the clean-cut minimalism of blonde wood and a generous wall of window glass opposite a few diner stools facing an open kitchen. Currently dinner is the sole option, but plans to add casual, take-out lunches are on the drawing board.

To celebrate our night, we clinked glasses of a petite syrah blend from Owamni’s list of primarily Indigenous wine producers (BTG $9-18), then turned to the menu, curated by categories (game, plants, salads, entrees, etc.). It celebrates ingredients of North America’s pre-Colonial days—thus, none of the pork, chicken, beef, wheat flour and dairy products introduced by European conquerors.

From the menu’s game list (sausage, bison tartare, preserved rabbit and other tantalizing starters) we selected a pair of Nixtamalized Native Corn Tacos. They’re built upon a tissue-thin, soft and malleable (and thus knife-and-fork, rather than finger food) tortilla infused with a come-hither sweet-corn flavor ($6). The first celebrated a petite cache of cedar-braised bison tendrils, flavorful and juicy as you please, joined by a fine dice of sweet apple, threads of leeks and amaranth leaf. Tasty.

So was the pulled duck version, built with bits of true-flavored, tender meat infused with sweet maple balanced by a subtle punch of hot chilies and gently pickled bits of squash and watercress.

Next, from the trio of salad offerings ($11-15, sized for sharing), we chose the Forest version—an unassuming (as it turned out) toss of romaine with small-diced segments of cured duck and turkey. It’s topped with half a duck egg, celebrating its well-timed, glowing yolk. It acted as centerpiece amidst a toss of hominy and shelled peas in a mild vinaigrette. Next time, I’d opt instead for a couple of the small side plates offered (cornbread to wild rice; blue corn mush to sweet potato, $6-9).

A trio of interesting sandwiches (bison, turkey, garden, $14) caught our attention, as did a Native grain bowl ($17-19), but we proceeded instead to consider the three entrees on offer. First, the popular bison, whose price tag (north of $40) put it out of the range of my pocketbook, then the catch of the day—today, lake trout ($26) and a stuffed green chile ($18).

The trout was, in a word, terrific: a thick cut of mild and ultra-moist demeanor beneath its enticingly crispy skin. It arrived marshaled by baby beet leaves alongside wild rice, crisp batons of parsnips and a lovely jolt of sweet-tart plum sauce. The mild, green poblano harbored chunky sweet potato, sided by hominy and black beans in a velvety and easygoing red chili sauce.

A trio of desserts, unlisted but described by our server, led off with what he called a creation similar to chocolate cake with ice cream. Or choose a berry parfait topped with walnut cream or a sunflower-squash tart with mixed-berry sauce.

In line with today’s trend toward equity, a 15% service charge is assessed in lieu of tips.

Is this a restaurant which will draw more than the curious one-timers? Time will tell. I’m rooting for its place in the pantheon of unique local options with which our city is blessed.