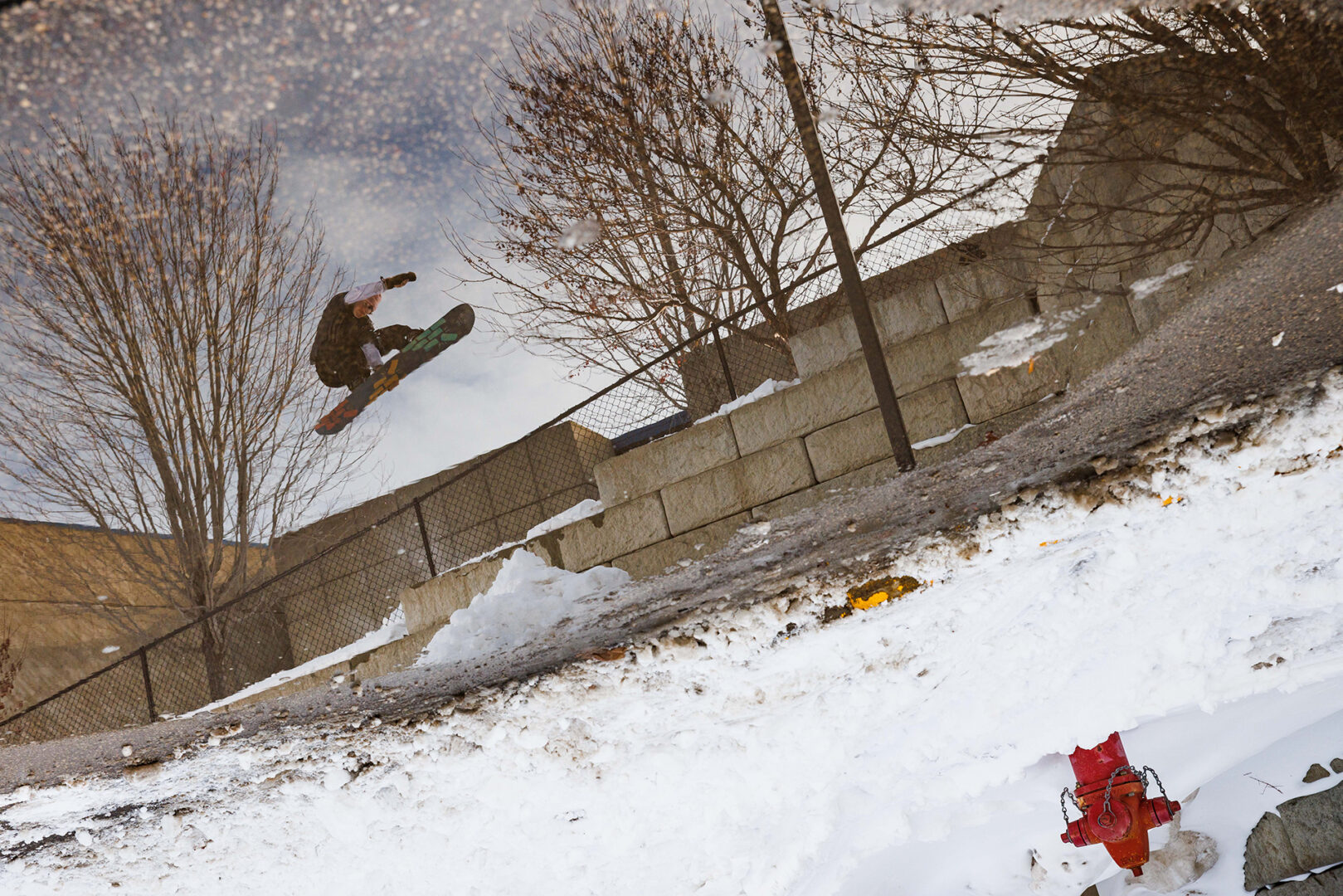 If you stand atop a steep, wintry hill and, with mittened hands, smoosh into a sphere what makes that hill wintry, you’ll produce humankind’s simplest masterpiece–a snowball. And, if 20th Century cartoons are to be believed, if you release said ball like a bowler, said ball will roll and grow, grow and roll, remaining a snowball but becoming a bigger version of itself as it tingles the hill’s spine.

In this way, that snowball is very much like DUH.

The DUH in question started within the open-air arena of snowboarding, that extreme sport where crews of blue-nosed, thrill-thirsty masochists strap on ski britches, lock their feet into a wood-and-fiber glass platforms of plop, and tell gravity to take a hike. Two years ago, shred-centric event producer Snowboy Productions offered a decal that was a tiny recreation of the Progress Pride Flag carved into a single syllable which told the world at a glance that Snowboy Production’s support of the queer community was stupid obvious.

In this way, DUH was smooshed together.

A cynic might dismiss such a premium as a cloying public relations ploy, but such a cynic doesn’t understand the culture of snowboarding. A sticker placed on a snowboard is no small thing to such an athlete as all snowboarders consider their bases extensions of themselves…probably because, while plying their often-acrobatic avocation, snowboarders’ snowboards are extensions of themselves. This, therefore, assigns a snowboarder’s stickers a meaning akin to that of an anchor tattoo on a sailor’s forearm—it’s an open declaration of identity, and anyone sporting the DUH decal was publicly identifying as an ally of the LGBTQ community.

One snowboarding crew that took special note of the DUH sticker was Snowboy Productions stalwarts Pink Dollar Po$$y, a collection of winter grinders who rallied around the obvious demographic.  Recalls co-founder Elias Lamm, “Casey Pflispen and I had been riding with each other for years…not as closely, though, until we found out we were both gay. Then, the Pink Dollar Po$$y was born.”

The name of the group, which has since its inception grown (and continues to grow), was intended as reverse cultural appropriation.  “’Pink Dollar Po$$y’ is sort of supposed to be ironic,” explains the aforementioned other-co-founder, Casey Pflipsen. “You know how big companies just capitalize on the ‘Pink Dollar’ by queer bating and marketing towards us claiming to be ‘inclusive’ just so we buy their product?  By naming ourselves the Pink Dollar Po$$y, it’s a way to say we’re here to take back that Pink Dollar.”

Of course, there’s a simpler, more-shred-oriented aspect to the name, too.  “I really like to just think of ourselves as a crew, a crew of queer snowboarders,” continues Pflipsen, “but we are also sort of a snowboard video production crew. And we are also a brand. So it’s really hard to put a label on us, just like it’s hard to put queers into a box.”

That label-breaking was made manifest with a Pink Dollar Po$$y Internet video entitled “Performance,” a wild hybrid of tricks and bloopers and get-used-to-it ‘tood that demonstrates, where snowboarding is concerned, wusses, regardless of sexuality, need not apply. Also on display are the crew’s imagination and resourcefulness as they transform various ivory powdered Twin Cities locales into downright-MacGyver-esque half-pipes, ramps, and crash pads without the padding.

The video’s release confirmed the Pink Dollar Po$$y’s commitment to the Art of Board, so, naturally, Snowboy Productions’ rainbow decals began a beautiful friendship between that organization and the Po$$y. “[The DUH Stickers] were a hit, everyone was stoked on them,” Pflipsen says. “When I see those DUH stickers on the hill it makes me so happy to see allies showing their support.”

The alliance rolled along, growing like a cartoon snowball as it did: Snowboy Productions approached the Pink Dollar Po$$y about filming the adventures of the LGBTQ snowboarders over the course of Snowboy’s twenty-fifth season, turning those adventures into a promotional film. “Of course we said, ‘Yes,’” reports Pflipsen.

DUH The Movie was the result, having been featured on Snowboy’s Youtube channel on November 8th of this year…but the rolling cartoon snowball will reach its grandest diameter as DUH The Event, “a two-day gathering of LGBTQ snowboarders and allies from around the country in a celebration of creativity, expression, community and love,” according to its invitation.

DUH The Event is set to take place on December 8th and 9th.

That first day will be a private affair filled with the Po$$y and their friends committing their acrobatic mayhem to film. As for Day 2, Marsha Hovey, Marketing Director of this happening’s epicenter, Dresser, Wisconsin-based Trollhaugen, reports: “DUH The Event is invite only during the hours of 10am and 3pm [on December 9th] and will gather some of the biggest names in street snowboarding for a photo and video shoot that will get the world stoked.”

But the general populace will have their moment in the chilly sun, as well.  “Following Friday’s private photo session, DUH The Event’s terrain park build will be open to the public with a special community gathering hosted by Pink Dollar Po$$y and Lavender Magazine,” Hovey announces. “The Happiest Hour at Trollhaugen will take place from 3pm to 6pm with giveaways, magazines, and more.”

This part of the happening will smoosh the Po$$y into its fan base like two mittened hands forming a snowball. “We have received nothing but love from our LGBTQ snowboard community,” Casey Pflipsen exults. “And from the snowboard community in general, I feel like we haven’t received much pushback other than the few negative comments on social media. Other than that, it’s all love.”

These loves—from fans to athletes and from athletes to fans–will combine to form a different kind of masterpiece. “We love and appreciate all of the support and have no time for haters,” proclaims Elias Lamm. “We have a group of amazing humans that are living to create this work of art.  Our brushes will never run dry, and we are determined to be ungoverned by society and the industry.”