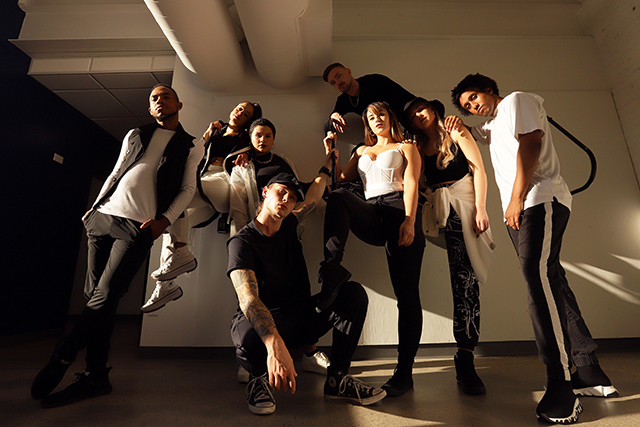 SHAPESHIFT has been a part of the Twin Cities arts scene since 2013, when a group of friends began craving a collective of dancers that mirrored the diversity of their own lives. Creative Director of SHAPESHIFT, Ashley Selmer, explains, “I was teaching at different studios around the Twin Cities and met a lot of talented performers and dancers from different backgrounds, but really did not feel there was a collection of talent from different races and backgrounds performing together. We thought it would be cool to put together a show with very talented people from different walks of life.”

In the fall of that year, SHAPESHIFT put on its first self-titled show. Theaters were packed and the dance collective basked in standing ovations. Not a dry eye in the house. “We’ve carried that feeling and fusion of our diverse collective inevery one of our performances,” says Selmer. “It shapes the art we create both intentionally and unintentionally.”

SHAPESHIFT has found professional success over the years, performing at huge events like the 2018 Super Bowl and the 2016 Prince Tribute Concert, but Selmer makes it clear that the metric of success for SHAPESHIFT is centered around people and story. “We use our storytelling to share complex themes of our lived experiences,” Selmer explains. This central tenet of personal storytelling was initiated by Selmer almost by accident. After experiencing what she describes as “a pretty awful personal betrayal,” she realized that she could turn her story into “a Beyoncé comeback moment [and] decided to tell it on stage.”

The personal stories SHAPESHIFT brings to the stage vary widely; dealing with issues like sexuality, police brutality and religion; but are united by their intimacy: every subject is deeply personal for at least one of the dancers. “It’s not always easy,” says Selmer. “We’ve cried in the space, we’ve laughed in the space—all of the things. But it is a form of therapy.”

Making such personal art together has created an intense chemistry between members of the collective, which is regularly the subject of inquiry at talkbacks after performances. “[Our chemistry comes from] the mutual respect and exchange of ideas and a true appreciation of everyone’s talent and lived experiences,” Selmer explains.

Selmer’s pride for and love of the people who make up SHAPESHIFT glimmers through everything she says. Every creative who puts their heart, mind, life, body, creativity and skill into SHAPESHIFT is directly responsible for the success of the collective. She lists off everyone involved, from the all-female production staff to their videographer, acting coach, and every single dancer: Gabriel Blackburn, James Gavins, Hannah Herrig, Sophia Meza, Rachel Miller, Nate Maliscke, Alan Mure and Nate Kay.

“We’re utilizing this art, dance and theater space as the cool, fresh way to bring people together,” Selmer says. “This is the group that’s doing it and they’re coming from Minnesota. In the art world, the Midwest gets looked at as this not sexy city, but this is the new cool.”

SHAPESHIFT is a new kind of a cool—a cool that cares about what is happening in the world and prioritizes being inclusive and transparent without compromising fun. “It’s colorful and vibrant and alive. You get a little bit of every flavor—in people and personalities and in music.”

Generation Z gets it—ready to embrace the energy and excitement while still digging deep into the subject at the heart of any SHAPESHIFT performance. “At the Kennedy Center, we had the chance to do a bunch of meet-and-greets with the BIPOC community from the city schools bused in to see the show,” Selmer says. “One of the biggest takeaways wastheir eagerness to discuss their love, interest and curiosity surrounding the characters in our productions. That was the day Iknew our storytelling was making an impact.”

The last couple years have required a certain degree of recalibration. “We finished our performance of ‘Grey Skies Blue’ at O’Shaughnessy Hall in late February 2020, just prior to everything being shut down,” says Selmer. “We had aneight-city tour planned [and] were in the beginning stages of talks about an Off-Broadway run.”

Selmer continues: “Once Covid hit, we had to pivot, look within ourselves, and decide how we were going to survive the financial and emotional effects. True to form, we’ve been shifting shapes and evolving ever since.” In the last year and a half SHAPESHIFT has acclimated to virtual spaces, initially holding rehearsals via Zoom and later teaching a 10-week virtual residency with kids from the Greenwich House Music School in New York.

As a Minnesota dance collective, SHAPESHIFT also had to work through the murder of George Floyd. “We mourned and protested peacefully along[side] our Twin Cities community; reacted silently at George’s memorial site, freestyled through grief in our living rooms, hosted a talkback about race with a local theatre, and collected essential items for our neighbors,” says Selmer. When the YWCA asked SHAPESHIFT to participate in their virtual memorial in honor of Floyd, the collective was “on board right away.”

SHAPESHIFT crafted a piece that played a portion of Martin Luther King Jr.’s speech over hard-driven, emotional beats. “That particular performance was a much more personal, tender one,” Selmer says. “That’s what we love to do: heal through movement and hopefully help others do the same…to create a space for people to grieve.”

There are plenty of ways to fill your life with SHAPESHIFT, from performances (check them out on October 1st at the Paramount Center for the Arts in St. Cloud, or on October 3rd at the Como Park Pavilion), following them on social media, and checking out their classes. Their six-month-long class series is free to the community and designed for all ages and skill levels. Of course, donations to the collective go a long way as well. SHAPESHIFT has also started collaborating with brands it believes in and is excited to use their craft on behalf of organizations that align with the SHAPESHIFT values of fairness, inclusion and openness.

SHAPESHIFT is special—a talented collective that embraces big topics without losing sight of the joy and passion that led them to dance in the first place. “I’m hoping that we’re the company that is not only making people feel something and tap their toes and vibe, but also unconsciously making our viewers aware cross-generationally that this is the way that the world should look.”