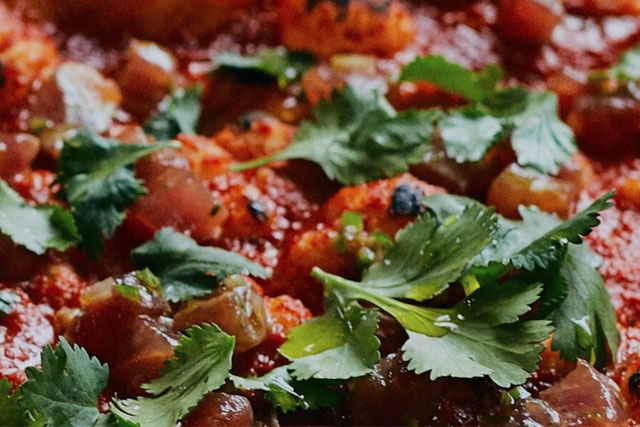 Note to trend-watching diners: Fusion menus are back in fashion, at least if the bold-name chef orchestrating them is Daniel del Prado (Marina, Colita, Rosalita and more in Southwest Minneapolis, plus Uptown’s Burch Steakhouse). His newest venture, however, is anchored in the North Loop, occupying a historic building that also houses the restaurant Kaiseki Furukawa. Having its Japanese chef so close to mentor him piqued del Prado’s culinary curiosity, resulting in the likes of togarashi on his Marinara pizza (Yes, he’s installed a woodburning oven) and cavatelli pasta sauced with sake.

The setting—chic, spare and dressed in gleaming white—invites the (well-spaced) diner to sink into banquettes or grab a stool at the open kitchen to investigate the small but well-curated menu of apps while sipping what’s clearly the bar’s most popular cocktail, the Mican: gin jazzed with a strong, perfumy accent of tangerine, server with a “mandarin cloud” which looks—tastes—like cotton candy.

A dozen-strong list of apps ($9-16) blends Japanese and Italian ingredients in virtually every creation, from the straciatella soup brightened with wasabi to the panzanella salad melded with bonito mayo. Our decided favorite of the night was the plate of pork gyoza, whose chewy noodle wrappers blended the meat with earthy, chewy woodear mushrooms in a rich, foie gras-enhanced broth balanced with the brighter flavorings of nori and scallions. Great dish!

We also made quick work of a plate of deepfried eggplant fingers called katsu, served with a blissful, basil-scented red cabbage slaw awakened with occasional pops of fresno chilies. Cole slaw never tasted so good. However, a dish of cauliflower karaage—florets flecked with bits of blue cheese in a chili vinaigrette—proved underwhelming, as did the order of fried prawns with shiso lemon. Bound in translucent wrappers, the shrimp arrived overcooked and stodgy, bereft of interest.

Next time: the squash arancini rice balls viewed at an adjoining table, moistened with a brown butter mayo, enriched with agrodolce and hazelnuts. Or the Wagyu beef nigiri, built upon bone-marrow risotto, ponzu crumbs and horseradish.

Tonight, on to the pastas—a quartet of offerings ($16-26) generously portioned for sharing. The pea-green nuggets of cavatelli pasta, invitingly sauced with a crunchy pistachio pesto, sake, Parmesan and chives, delivered a win. But the squid ink papardelle (all pastas are housemade, assured our server, a former waitperson at Meritage) was overly salty and hard to finish. Italians aren’t crazy about saucing seafood with red sauce, and this version proved those canny cooks were right: the Bolognese overpowers the shreds of sweet, sweet seafood, abetted by lusty Pecorino cheese. Next time: the    shrimp ravioli in XO butter or the fettucini ai uni, starring king crab with basil and serranos.

Or, wait! Next time, one of the gorgeous pizzas we viewed emerging from that hot, hot oven: six choices ($11-18), from a traditional Margherita (mozz and basil) or Quarto Formaggi to the Verdi, piled with miso pesto, burrata cheese, walnuts and Parmesan. Or a foray into the list of Yakitori—all sorts of chicken bits, from drum to wing to skin, $2-5. And another of those cloud-topped Micans, please.