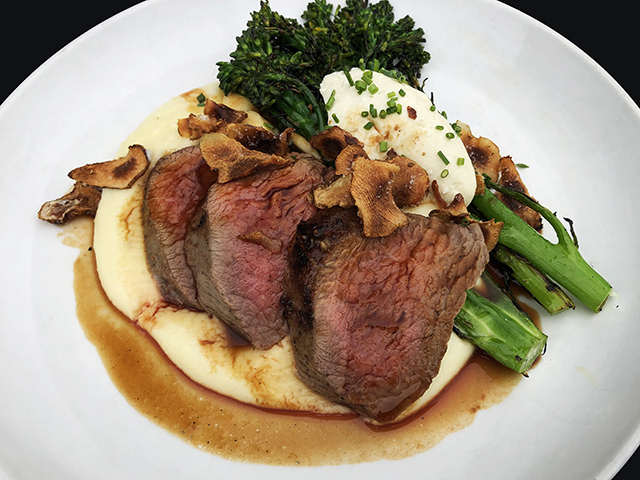 Like many restaurants, Augustine’s in St. Paul’s Union Park neighborhood shuttered during the pandemic. The good news is it’s back, but diners shouldn’t expect the same old bistro.

Augustine’s 2.0 includes a new chef—Derik Moran, an alum of the Dakota Jazz Club—and a new menu, devised by bold-name chef/consultant Lenny Russo. The list is compact and interesting. And its plates are well-presented. Prices are geared to include the customary tip, so that all staffers—cooks and dishwashers included—can count on their fair share. There’s also an on-site pastry chef, a rarity these days.

This week’s visit was my first, but my companion, who’d dined here before the days of pandemic, assured me that the large and lively room remains the same—which, alas, translates to an environment perhaps a little noisy for some patrons. Those without lip-reading skills could find themselves at a disadvantage, thanks to the tin ceiling, heavy wooden tables and straight-backed chairs; in other words, nothing much in the way of sound-absorption.

The food list leads off with seven small plates ($12-20), which range from a summery vichyssoise greened with arugula puree to pommes frites with Béarnaise sauce. We started with the sunchokes—a chilled still-life centered on that potato-y vegetable in the good company of sweet corn kernels, sprigs of aromatic fennel, juicy nectarines and hint of Aleppo pepper. Pipings of a suave basil aioli knit the players together as a hearty, tasty starter. 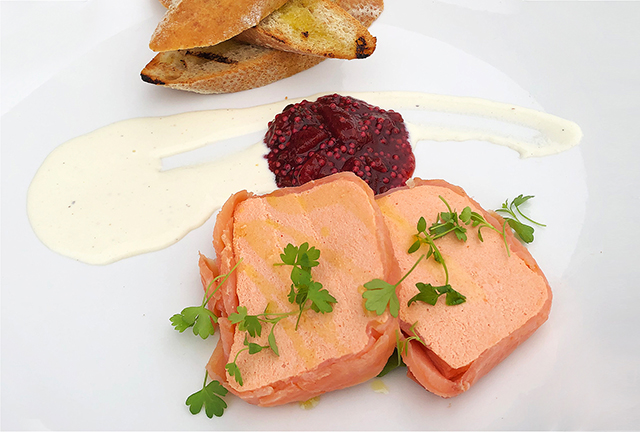 The smoked salmon terrine harks to the more sophisticated side of the kitchen’s French-rooted menu, and it’s lovely indeed. A creamy slice from a terrine of pureed salmon is the plate’s centerfold, lavishly garnished with strands of cured salmon along with a fruity, cranberry-based chutney, and a drizzle of a robust, head-clearing horseradish cream, presented with slim filone toasts. It’s a supple and tasty rendition of the sort of classic French bistro fare that serves as the menu’s inspiration.

Next, seven large plates ($18 for a burger; otherwise $22-28) claim your attention, ranging from mussels in white wine to skate wing, spring chicken to tortelloni—plus a tempting and simple plate of Toulouse sausage with croissant, Gruyere cheese and a fried egg. We split the beef sirloin, and I was seduced by this kitchen’s add-on of blue cheese mousse. And a lively plate it proved to be, with several ruddy, perfectly timed slices of ultra-juicy beef, augmented with potato puree, crisp fronds of broccolini, more sunchokes, and a suave glace de viand to bring the dish home. And oh, that mousse! It could double as dessert. 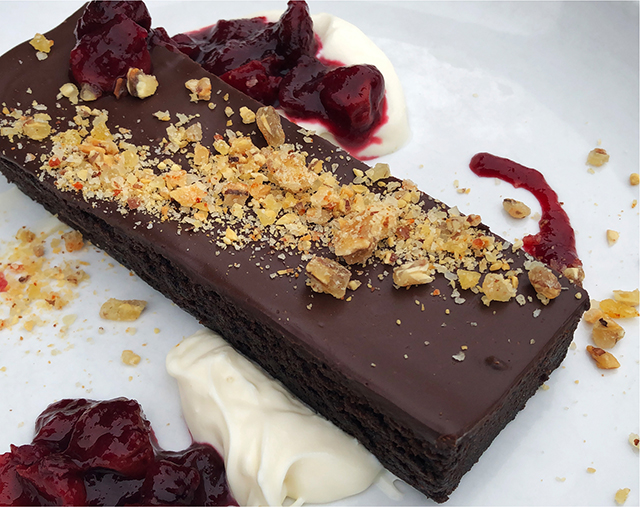 Then it was time for the actual dessert ($12, or a cheese board for $18), and do save room. I failed to inquire about the housemade semifreddo and sorbet because my eyes had landed on two other reasons to shelf my diet: nectarine cream tart and blueberry turnover (warning: There’s also a chocolate temptation). Our server steered us toward sharing the blueberry number, which tasted mighty like a super-elevated Pop-Tart in the best possible way. The pastry came sided with a scoop of Earl Gray ice cream; another bonus.

We’d sipped beer throughout the meal, but let me applaud the kitchen’s addition of house wines by half or full carafe ($14/28) as well as a short but definitely intriguing wine list. Cocktails, too.

I will definitely return. The menu, and its nice execution, is as close as I’ll get for a while to that of a corner bistro in Paris: classic, non-fussy fare, but with homegrown tweaks. Vive Augustine (and, by the way, you can spot a portrait of that holy man on a back wall. Apparently he’s the saint of pommes frites).