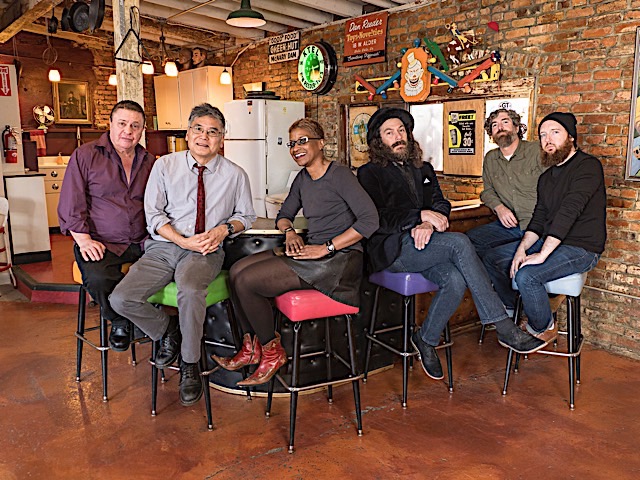 My highest belief is in duality. Not one thing is one thing only. Human nature is to force a category, a label to everything we experience. We mark our lives on a linear timeline and organize it into chapters. The point where a chapter ends, it also begins. It’s in these transitions that I find duality, where I find God. I find that duality mirrored in everything I think and feel.

Janus is the Roman god and goddess of transition, of beginnings and endings. It’s also the name of the new album by the Paula Boggs Band.  Paula Boggs is the primary songwriter of the band’s music but would describe herself more as a storyteller, a chronicler, or an observer, “of something I am trying to make sense of in the world,” Boggs says, “there are other songs that are quite personal and come from a deep place within.”  All of the songs were written or reimagined in early 2021, during what Boggs calls the triple pandemics of public health, race, and politics.

Despite my beliefs, I was skeptical of a musical experience that dared me to hope that we were transitioning out of the horrific time we have been through in the last few years.  It was songs like Where’s my Scarf?, Paula’s tongue and cheek take on the Covid pandemic, Don’t Let the Clowns (Break You Down), a sense of encouragement for dealing with the clowns in your life, and Thirty More Years and a Day, a song that honors Boggs’ 30 year relationship with her wife, that gave me more than hope, but prompted me and allowed me to acknowledge, to heal, and be ready to move forward to face the future. After listening to the album, I couldn’t say it better than what a fan told Boggs recently after seeing the album performed, “I feel better now than when I came in the door.”

As an artist Boggs says she has learned that, “there is no substitute for authenticity.” The impact of her storytelling is amplified by the band’s musicianship, a result of their technical excellence and professional training. Poetic lyrics, unique chord progressions, and a blend of the folk, jazz, bluegrass, and Americana genres is what makes up the Paula Boggs Band’s officially trademarked sound of “Seattle Brewed Soulgrass”. Boggs says, “If we are doing our job, our voices and our instruments aren’t getting in the way of the story, but rather they’re helping us tell the story. Then we’ve won.”

The band’s sound’s inspiration is rooted in Boggs’ past, where she grew up in segregated Virginia toggling between the folk mass music at their father’s Catholic church and the gospel spiritual music at her mother’s African Methodist Episcopal church. Both elements influence the “soulgrass” sound of the Paula Boggs Band and both can be heard on Janus.

Boggs’ mother happens to share her name with the album’s title. “My mom is a risk taker and has never been afraid to reinvent herself.” When Boggs was 13, her mother took her and her three younger siblings and moved from Virginia to Germany to be a teacher to military families stationed there. Those formative teenage years for Boggs were filled with experiences that gave her “a sense of self and place”, that she drew strength from later on in life. Boggs says, “That act by my mother forever changed the arc of my life, and gave me a sense of the possible.” Those possibilities seem to know no bounds for Boggs. She can boast of accomplished careers in the military, in law, in radio, and now in music as a congressionally appointed naval officer, a corporate executive and board member, as well as serving on the President’s Committee on the Arts and the Humanities. Boggs is currently working on a memoir to chronicle all the chapters and transitions of her life.

The Paula Boggs Band has experienced a transition of their own while working to bring Janus to audiences. When the album was recorded just over a year ago, it was done under the strictest of Covid protocols. The band was ridden with anxiety and uncertainty, not knowing when they would be able to perform for a live crowd again. Boggs says, “we now have a more normal cadence of performance,” as they’ve reconnected with fans playing shows and festivals. A welcome reprise to, “interactions with an appreciative audience, venues happy that we’re there, and being pleased by the crowds we’ve been able to attract.” says Boggs, “Now is a more positive, hopeful, door-opening time for us.”

A particularly exciting door that opened recently for Boggs was getting to meet her collaborator on one of the album’s singles, King Brewster, in person. Grammy winning artist Dom Flemons sings and plays the banjo, bones, and jug on the song about a recently discovered true tale of Boggs’ enslaved then emancipated ancestor. Their respective portions of the song were recorded remotely and then mixed together. It wasn’t until last month at the Folk Alliance International Conference that they met face to face for the first time. “We hugged each other, I met his wife and his four year old daughter, and we just had this beautiful meeting and gathering. We felt as if we’d known each other for a while,” says Boggs and that working with him, “was really magical.”

Flemons’ reaction when he first read the lyrics to the song he would later record was that Boggs had written poetry in every line, poetry that is unexpectedly direct and honest when it comes to covering the brutality of slavery. Boggs says, “Anything less than honesty would dishonor my ancestor, what he lived and died, to make me, me.” The song carries the theme of duality, as it’s the song that looks the farthest into the past but points to hope of a better future. “The ending of that song,” Boggs says, “people have gravitated to the lyric: we can’t repave the past, may the future be recast.”

Let’s allow that future to be filled with more of the likes of the Paula Boggs Band. “We’re a band where we are grooving and we are exuberant,” says Boggs, “We’re a band of people who like each other and we exude this joy.” There is no doubt, we will continue to experience frightening times, but changes and transitions are always happening. We can still groove and grieve. Remember and remind yourself that life will always demand its balance. Take the time to listen to Janus. Reconcile and restore your soul with soulgrass.

The Paula Boggs Band is honored to be covered by the LGBTQ press and says to Lavender readers to, “Keep in touch with us! We’re all over social media!” Head to www.paulaboggsband.net/ for their Instagram, Facebook, Twitter and Youtube.

Listen to Janus by the Paula Boggs Band on Soundcloud and Spotify.