Queering the Arts: Expression and Representation 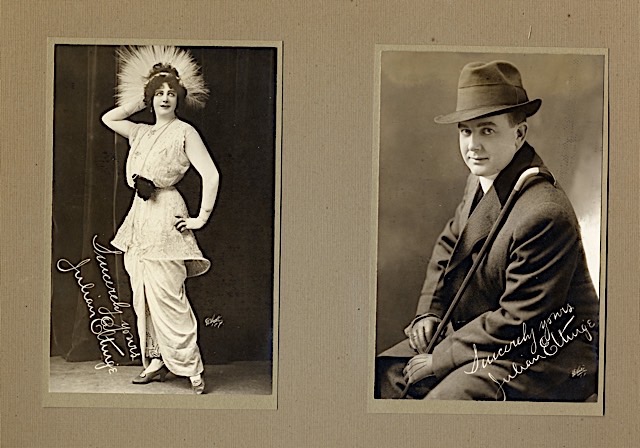 Historically speaking, society’s acceptance of the LGBTQ community has ebbed and flowed. Whether looking at ancient Greek pottery or modern television and films, the arts continue to be a safer space to explore society’s norms and gendered boundaries.

“The arts are carriers of memories—through stories, oral histories, songs, theater, and the visual arts. Society has not always been this rigid about gender or sexuality,” says Nicole E. Soukup, Assistant Curator of Global Contemporary Art at Mia.

Indeed, prior to the second World War, Vaudeville venues hosted performers known for their cross-dressing personas. At the time they performed, this was considered more of a gimmick and used largely for laughs, but these performers are certainly a part of the rich history of drag going back to the early part of the twentieth century.

Images held in the James K. Hosmer Special Collections at Hennepin County Library reveal some notable cross-dressing Vaudeville performers who could have appeared at Hennepin Avenue’s Orpheum Theatre, which was billed as the largest vaudeville house in the country when it opened.

When Gladys Bentley started her career during the mid-1920s, performing at speakeasies and rent parties, she was open about her identity as an out lesbian. Francis Renault often left theaters in female character for publicity (and was arrested several times for doing so). Julian Eltinge became so famous that a New York Theater was named after him. Kathleen Clifford billed herself as “the smartest chap in town,” wearing a monocle and top hat on stage. The list of genderbending Vaudevillians goes on and on.

“The term ‘drag’ wasn’t even used yet. It was considered almost a comedy thing,” says Tim Carroll, an archivist for Hennepin Theatre Trust. “Society at the time pretty much accepted it as that. It was a theatrical schtick, a routine, it wasn’t taken seriously. It’s not really until the ‘50s and ‘60s that you start to see these performers billed in a little bit more serious light.”

Of course, that freedom was limited. Off stage, the performers were arrested for cross-dressing and there was a doubling down of conservative values following WWII (Washington D.C.’s “lavender scare” is a prime example).

“For the general public, this was the only outlet that would have existed for someone to express themselves as their authentic self,” Carroll adds. “Up until the modern era, if you were gay, there weren’t a lot of places to express yourself. You certainly couldn’t do it in public, so the arts would give you a vehicle to create and express.”

The reality is, LGBTQ people often experience a deeper path of self-reflection and life experiences as the result of an unaccepting society. Therefore, it follows that many LGBTQ people might choose to express their feelings and experiences through artistic means.

Timothy De Prey, principal accompanist for the Twin Cities Gay Men’s Chorus, echoes the historical legacy of LGBTQ artists and the need for an outlet. He says, “Through the arts, we can be free to safely express our inner most thoughts without the fear of censorship. Through the arts, our thoughts, feelings, and emotions can be expressed in ways words cannot.”

Scholars have explored how mid-century artists like Andy Warhol, Jasper Johns and Agnes Martin developed subtle visual codes to signify queerness. It wasn’t until after this period, notably following the Stonewall Riots of 1969, that queer art takes a turn toward visibility and the desire to create representation where none exists.

“If you grow up in a culture where you don’t see yourself reflected, it tends to make you kind of crazy; it makes you doubt your own sanity and it increases a sense of isolation,” says Patrick Scully, a staple in the Twin Cities dance and theater scene and the man behind Patrick’s Cabaret. “When people start to put those images out in a public way, that reaches a broader mainstream; it connects to people and people are hungry for it.”

Sasha Cassadine, show director (and often host) for Flip Phone Events’ ubiquitous drag brunches, found that connection through her drag career. “I think we’re drawn to the arts because it’s definitely a way to express ourselves. Being queer anywhere is tough,” Sasha says. “I think the arts give us a chance to release, to be ourselves, to express all of the different hurts and pains and joys that we have inside of us.”

Like the Vaudeville performers before them, the ball culture of the 1980s gave many LGBTQ people, particularly queer people of color, an artistic outlet. The underground nature of the balls was in stark contrast to the highbrow art forms that come with entry barriers: ballet, art galleries, couture fashion, and the like.

“The expressions there, to me, are phenomenal, because here you have groups of people who are largely impoverished, shunned, and in the ‘80s and ‘90s dealing with this slaughter of AIDS, but they still find the gumption to get up and ball and express,” Carroll says. “I don’t think you can have high art without low art, I think it’s impossible. Low brow and highbrow co-exist, and they have to, or else you don’t have either.”

Whether the medium is drag, paint, or any other art form, LGBTQ artists are able to share a piece of themselves with audiences that they wouldn’t necessarily get to otherwise. “It’s still just theater. We still wear costumes, we’re still creating characters, and we still play a role,” Cassadine says. “Even when I’m hosting on the mic, it’s genuinely me, but Sasha hijacks this body and takes me to places I wouldn’t be able to go as Harry. I’ve built up so much strength and confidence through it.”

The predominant narrative around the arts is that the industry tends to be more accepting than other sectors, that LGBTQ people are able to bring their authentic selves.

“I’ve worked as a scientist for the government, in marketing and business development for large businesses, and at arts nonprofits. Each of the three sectors caters to certain personality types, and the arts welcomes them all,” says Dawn Bentley, Executive Director at Minnesota Fringe Festival. “I can’t think of very many spaces where diversity of all types is so genuinely welcomed.”

Are LGBTQ people really more artistic than the general population? Depends on who you ask, but the proof is in the creative pudding. Kim Hines, a multi-hyphenate director, playwright, and actor, shares that the LGBTQ community tends to have a lot of creatives that are naturally drawn to the arts.

“That seems to be a place that most of us call home,” she says. “You don’t care who someone sleeps with or lives with. You don’t care about all of that, all you care is that they write this play or that they dance this dance, or that they play this instrument or they sing or whatever.”

“When you’re in the arts, you don’t have to challenge people according to what they wear or how they look. Because creatives are allowed to be creative,” she continues. “You’re not stifled. You really can be yourself. I always felt that freedom, and I’ve been in professional theater since I was a child. When you’re LGBTQ and you go into something like theater, you do start to look for your tribe. You start to look for your community.”

According to Soukup, artists are inherently observers of humanity: documenting, celebrating the best, and magnifying the worst in society.

She says, “The tenacity that the arts forge in artists creates bonds, it creates patience, endurance, and all of the traits that strengthen us. But I think, there’s something about marginalization that also forms bonds. The Twin Cities have long been a refuge for creatives and for the LGBTQQ communities seeking acceptance and opportunities not present in our hometowns.”

If you scratch the surface, across the arts, there are histories of marginalization and erasure that mirror society. “The Twin Cities has always been mercurial when it comes to supporting the LGBTQ+ and gender non-conforming communities,” Soukup continues. “It wasn’t that long ago that we were celebrating Prince’s gender-bending performances while policing queer spaces. It was just 45 years ago when gallerists Gordon Locksley and George Shea had to leave Minneapolis.”

Marginalization is certainly a reality, but Scully believes change happens because artists dare to dream a different and better world. He says, “Once artists dare to share those dreams, then other activists join with those artists in helping to manifest those dreams in the world and start to make them a reality. Eventually, the politicians come along and decide that what exists should no longer be illegal.”

Ultimately, representation in media, the workplace, and education matters. Soukup perhaps puts it best: “When that freedom is protected, nurtured, and encouraged, wondrous things are possible.”