Overcoming Obstacles with the Minnesota Vixen 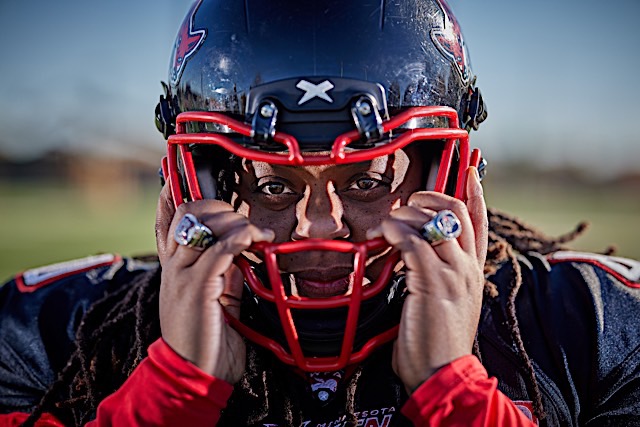 While many people associate Vikings or Gophers with Minnesota football, there’s a flipside of athletes working just as hard, just as energetically—but dealing with more obstacles.

The Minnesota Vixen, established in 1999, is the longest continuously running women’s full-contact football team in the nation. Over the past week I’ve been able to talk to several players on the team and have learned a lot about what it takes to make it in the Women’s Football Alliance (WFA).

“The violence is there,” says Berg Ellenberger, a nurse who moonlights as a tight end/punter. “The rules, the equipment, the field space, the time—it’s all identical to an NCAA Division One football game.”

Even so, the team still has to deal with a fair amount of ignorance when it comes to their sport. Awareness of women’s football isn’t as common as awareness of other female-driven sports—from those who don’t know it exists at all, to those who think it is somehow a lighter version of the game. Fact is, this is football—all high speeds and crushing helmets.

“I think the most frequent comment that I hear from people who maybe haven’t heard of the WFA or women’s football,” says Caitlin Hill, defensive back, “is they always assume it’s a lingerie league. It’s far from that.” Caitlin plays alongside her partner Ace Theissen, a linebacker who had also served as team captain in past years. It turns out that the disparity between men’s and women’s football doesn’t stop at perception.

“This is all paid for by players and by trying to get sponsorships with other businesses,” says Theissen. “So, the more complications we have with that, the less money we can have. All the travel and all that stuff, we pay for—purely for the love of the sport.”

“I think the WFA and Laura [Brown, team Owner/President] and James [Brown, Vice President] have been as creative as possible with the resources they have to keep player costs as low as possible,” Berg adds. “Having said that, it’s a barrier that the WFA experiences that the NFL doesn’t.”

It’s remarkable that, in the face of these obstacles—along with the constantly fluctuating pandemic—the team has still managed to exceed expectations. In 2021, still working under Covid health restrictions, the Vixen managed to make it all the way to the National Championship.

“I don’t think a lot of people in the United States saw it coming,” Berg says. “We were prepared, we worked hard, we were training hard, and we had great leadership. We had all the pieces in place to be set up for success.” While the team did end up losing to the Boston Renegades, Berg’s spirit has hardly been diminished: “We will outwork them, and we will out train them, and we will beat them next year.”

Along with being an amazing group of athletes, the Vixen hold a unique place in Minnesota’s queer community. Over 50% of the roster identifies somewhere on the LGBTQ+ spectrum, and the Vixen booth can be found at Loring Park Pride during the summer.

“My gender identity has not always been accepted on teams I’ve played for in the past,” says offensive line Charlie Barba-Cook. “Everybody [on the Vixen] was just so incredible about it. I was just completely blown away with how open and accepting everybody on the team is. This is definitely the only space I’ve been in where, from the get-go, it’s really open and inclusive.”

Having played on several other teams before, Barba-Cook noted there has always been something special about the Vixen: “Even before I paid attention to the Vixen, I knew who the Vixen were… They were the original women’s football team, in my head. Minnesota was where women’s football originated. From inception, the Vixen have been trendsetters.”

Now is a critical time for the Vixen, as well as many other WFA teams. Given the uncertain nature of the next few years, getting greater recognition and sponsorship will be key to ensuring the future of the team. Luckily, there are plenty of ways to learn about them and show your support.

The Vixen can be found on Facebook and Twitter, and at MNVixen.com. Here you can participate in their unique Adopt-A-Vixen initiative, which helps cover the fees and travel costs for individual players, as well as supporting those who work behind the scenes.

For those interested in getting on the field, the Vixen are always looking for open-minded and passionate individuals to play, volunteer or coach. One unique opportunity that has recently opened is the MN Minx, a sister team to the Vixen, who will be kicking off in Division Four this year.

“It’s a community,” Barba-Cook says. “It’s not just a sport to us. I always say if we can just get someone on the field with us for one day, I cannot imagine anyone turning down that experience. People think it’s a lot of money, right? It’s a lot of money—it’s a lot of time. But if you get on that field and experience what it’s like to have 50 other women telling you that you can do it, 50 other women who are all bosses in their own way and who are empowering you and empowering themselves—that’s a community that you really can’t get anywhere else.”