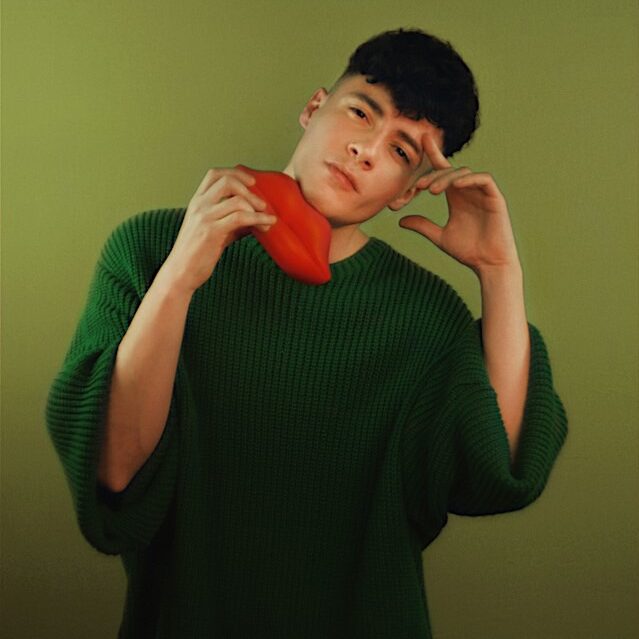 It’s the same old song and dance:  a kid’s born in northern Maine to a Japanese/French father and a Brazilian/French mother, reared in the United States, Brazil, and Japan, learning five languages along the way.  Fitting in is no easy task for the kid who bounces around the world like a bad check, and fitting in becomes even more difficult when the kid reaches his teens–that’s when rainbows come into his life in a big way:  the kid figures out that he’s a member of the LBGTQ+ community, and the kid finds himself living on the autism spectrum, two statuses he would eventually call his superpower.

Those rainbow refrains make things hard, sure, but they turn out to be comparative kids’ stuff:  before he’s fully grown, the kid is orphaned, and when adulthood finally greets him, it does so with a diagnosis of pancreatic cancer, doo-wop, doo-wop, doo-wop-bop.

Hey—no one said it was a good same old song and dance.

This is the story of Kentö, give or take a Charles Dickens novel–singer, songwriter, synth-pop arteest, producer, director of music videos, beater of odds, observer of the human condition…and inveterate, unapologetic lover of music.

YANG TO THE YIN

During all the swirling uncertainty of his childhood, all that churning chaos of his pubescence, the one thing that the future Kentö could always depend on was his greatest love, his love of music.  No matter what challenge life hurled at the kid, music’s succor was always there for him…even before he needed to be succored.  At the precociously-adorbs, downright-Mozart-esque age of six, the kid began performing and recording prefab tunes wherever he could, often summoning a Maynard-G.-Krebs-meets-Angus-MacGyver resourcefulness, turning household items into de facto instruments.

Kentö’s ardor of tempo, meter, and articulation grew as he grew, so much so that he began writing and performing his own songs, influenced by such millennial-retro acts as Duran Duran, Tears for Fears, and Kate Bush.   By age fifteen, while residing in the Land of the Rising Sun, he appeared professionally wherever a musician might get paid, singing and drumming and pianoing in exchange for tiny piles of yen.

Kentö’s love of music grew so big, in fact, that he decided it was big enough to risk by turning it into a Real Job.  In 2013, the kid recorded and released Complicated, his first EP, or Extended Play record—a presentation with more tracks than a single but with less tracks than an album.  “It has a clubby, anthemy vibe,” the creator observes.  That vibe turned the newly christened Kentö into an indy darling.

That’s when the cancer came a-callin’.  After a gut-wrenching, years-long battle, the young artist gave the disease the vaudeville hook with no return engagement.  Although he’s been cancer-free for years now, the malady has, in its way, stayed with him—haunted him, even.  “Cancer taught me to slow down and smell the flowers, so to speak.” he freely admits.

That setback didn’t make the Kentö any less ambitious or any less determined, though.  Kentö focused on the creation and release of an LP, (or Long Play, industry jargon for a full album).  He wanted the larger work to expand his audience, sure, but he had another reason for creating it, as well.  Toward these ends, he wrote twice as many cuts as such a project might need.  He ended up halving that abundance, a winnowing that proved less agonizing than one might expect.  “As I went through the songs, one connected to another when I found a common theme,” Kentö notes.  “There are sixteen songs on the LP.”

The album where those dozen-plus-four songs found a home was given the name Strangers, taking its title from a then-recent experience.  “I was at a party in LA, but I wasn’t at the table, if that makes sense,” he remembers.  “I had people on either side of me.  I felt like I was hanging out with the cool kids for a minute.  Then I looked around and thought, ‘You all know me, but do I really know any of you?’”

The LP not only demonstrates a growth in Kentö’s output, but also a growth in his maturity as a musician.  “When I first started out [as a professional], I was going for what was trendy in the moment,” Kentö recalls.  “Today, I’m going for a timeless sound, music that won’t seem dated ten years from now.”

Strangers’ first two releases were, respectively, “Silhouette,” a song exploring self-acceptance in the face of derision (and inspired by skater Adam Rippon), and “Pegasus,” an homage to Kentö’s late friend, drag queen Chi Chi DeVayne.  These have been followed by Strangers’ third single, “Australia.”  This most-current song has less to do with geography, topography, or zoography than you might initially think—“less,” in fact, to the extent that the song has nothing at all to do with those -phies.  Instead, it has everything to do with chronology.  And attitude.

“It’s already tomorrow in Australia,” the New York-based artist points out, “so there’s no point in stressing about it.  Whatever it has in store, tomorrow has already happened.  Do your best, and everything will be okay.”  Coming from someone who has lived Kentö’s life, one might do well to listen to this hard-won insight.

“Australia” owes its very existence to listening.   Kentö was hanging out with his longtime collaborator, fellow synth-pop artist Frankmusik, who has produced songs by such up-and-comers as Ellie Goulding, Colette Carr, and RuPaul.  The producer played several semi-finished tracks, and one in particular resonated.  Recounts the artist, “I asked him if I could write on it, and he said, ‘Sure.’”

This was the point at which Kentö’s spectrumy superpowers kicked in.  “When I write, I hyper focus obsessively,” the artist says, describing how his autism catalyzes the creative process.  “Sometimes, I focus on a feeling.  Sometimes, I focus on an image, or even on a single color.”  Into this effort the synth-pop artist synthesized his own LGBTQ+ identity and experience.   After this synthesis turned into “Australia,” producer and musician presented “the finished song to my distributor, and they loved it,” Kentö reminisces.

It’s the same old song and dance…except that it’s totally different.  Where the future Kentö found succor in music, the current Kentö dispenses succor via music.  “People write to me every day, from all around the world” the artist reports.  “They tell me about how they relate my songs to themselves.  They say my songs have made an impact on them, have helped them.  It’s interesting, it’s cool. ”

Music was always there for Kentö…and now, thanks to “Australia” and its siblings on Strangers, Kentö is there for music.  Early feedback indicates that the new LP has succeeded in expanding Kentö’s audience…and realized its other purpose, as well.  Affirms the artist, “I wanted to make an album that reminded me of why I love music.”

“Silhouette,” “Pegasus,” and “Australia” can be accessed via the usual streaming platforms, as well as Kentö’s website: