North of Normal, South of Strange 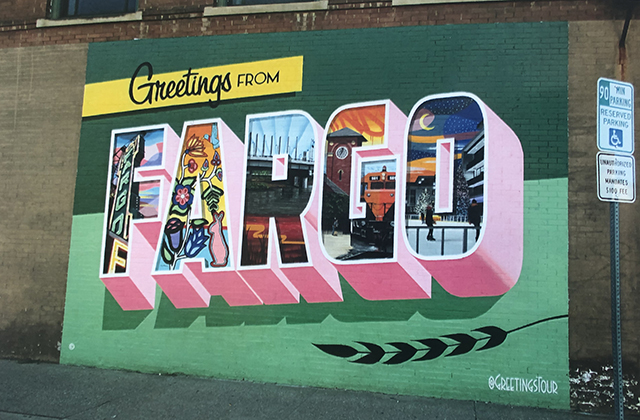 You saw the movie.  But the cult film Fargo wasn’t actually filmed in Fargo, so head on over to discover what-all the Coen brothers missed. (However, the infamous wood chipper now resides in the Visitors Center, where tourists throng to have their photos taken feeding a (mercifully, fake) body part into the actual device featured in the movie.

There, you can also pick up maps and brochures, along with the reassurance that, “contrary to popular belief, we do not get around in covered wagons. We have Uber and Lyft.” Those essential trappers’ caps, with padded visor and ear flaps, are for sale here, too. Oh, fer cute!

The quirky Coens missed a bonding opportunity, for the city’s slogan is “North of Normal.” Do its citizens take it to heart? You betcha. Broadway, the main drag, is populated with scores of unique shops—and not a chain among them. Dailey’s Market is a drug store, sort of, that also sells t-shirts reading “I live in Fargo. Really.” along with beer soap and sassy greeting cards. Stabo offers Scandinavian items, from candles and knitwear to gnomes in stocking caps. Some of the snarky gifts in Unglued include a purple velvet pumpkin and a hot dish shopping list. O’Day Cache proffers offbeat imports from China and India, while Zandbroz provides one-stop shopping for books, stationery and, in the rear, folk-art antiques the owner can barely bear to part with. Nearby, Insomnia delivers cookies until 3 A.M.

Follow Broadway south across Main to discover 8th Street’s enclave of shops—fine arts to fine antiques, plus vintage wear (yes, you do need those ’40s neckties and sweater vests.) But before you set out, pick up a map of the town’s dozen-plus murals to check out on your strolls. Art Alley, off North 1st, pops with an ever-changing line-up of huge, unofficial murals sprayed across brick buildings.

Yes, there’s plenty of indoor art, too, starting with the Plains Art Museum (free admission) and its intriguing collection of mostly contemporary works, many by Native artists. Gallery 4, a nearby co-op, offers local art for sale, along with artists’ essentials like sketch pads and Bloody Mary mix. Need a break? Every few yards around town you’ll stumble upon an indie coffee shop or one of the town’s eight craft breweries.

Cross the bridge over the Red River, hemmed with hiking/biking paths, and you’re back in Minnesota—in the college town of Moorhead, to be exact. It’s a quick stroll to the Hjemkomst Center, with its showpiece life-size model of a traditional Viking ship discovered buried in Norway. This model, built by an aficionado, actually was sailed to Norway in 1982.

Just outside, among the trees, rises a tiny stave church modeled exactly like one in Viks, Norway, of 1100 A.D. Guides lead tours hourly to the tiny, soaring structure made of wooden shingles overlapping like fish scales, and guarded by dragon gargoyles, remnants of Norway’s pagan past. A tiny window covering can be opened to let lepers stand outside and hear the service.

The museum does an excellent, and heartbreaking, job of chronicling the region’s land grabs from Native tribes, starting in the 1600s, on through the 1855 treaty, which pushed Natives onto reservations and what the museum calls the “concentration camp” at Fort Snelling.

A similar story unfolds in the exhibit called “Forced to Flee,” a tale told in gorgeous quilt art of migrants worldwide—from earlier pogroms to modern-day Syria and Nicaragua. Speaking of fleeing (but not forced), photos and artifacts depict Americans’ westward journey through the Dakotas, including one of a Red River wagon train setting out from St. Paul.

Bonanza USA continues the story with its village of relocated historical buildings—a schoolhouse, church, hotel, saloon and more. History of a more modern era is collected in the Fargo Air Museum, where visitors may wander, and wonder at, a dozen–plus airplanes, ranging from a 1942 Avenger, with torpedo and bomb drops, an Army helicopter used in Vietnam, to the intelligence-gathering and unmanned Predator, plus a WWII Mustang. Hop into a flight simulator, too.

And now to the pressing question: Where to eat? I didn’t venture far from the Jasper my first night—simply across the street to Teddy’s, a bar and grill in a vintage, brick-walled setting, specializing, indeed, in grilling—specifically, gourmet grilled cheese sandwiches. Choose from Mom’s classic version or options plump with add-ons such as ham or roast beef and caramelized onions. Each comes with a dipping bowl of—you guessed it—spunky tomato soup.

For breakfast, I sneaked across the street again—this time to Black’s Waffle Bar, a design-your-own scheme with temptations that range from pulled pork to pineapple, Swiss cheese to whipped cream. Other breakfast finds: Babb’s, a classic coffeehouse, to sit nibbling a cranberry scone while watching the trains, and a train mural, across the street. Or Nichole’s, where TLC obviously is the secret ingredient in her fine French pastries, from croissants to macarons.

Lunch at BernBaum’s, on Broadway, involves hard choices among typical Jewish deli icons, from Knishes and latkes to hefty, two-handed brisket-and-sauerkraut sandwiches. Or step over to Luna, anchoring a strip mall, for a pleasant surprise. (Everywhere I went in town, I heard: “Oh, I love Luna!”) Star of the kitchen: a beguiling peach-and-tomato panzanella salad, showcasing spheres of creamy mozzarella. Or choose Luna’s famous blue corn-crusted catfish, or char siu pork belly. Popovers, too. In the tiny café I made friends with a gay pastor lunching there, who told me he marched in this year’s rainy Pride Parade.

And for dinner? Can’t go wrong at Rosewild, within the Jasper, and its list of small plates ranging from a ruddy bison tartare to Norwegian lobster (actually mega-crayfish) in roasted corn custard, or knuckles of pork confit on blue cheese polenta. And what about the smoked whitefish-green pea carbonara? Sure, steaks and burgers, too.

Makes you hungry for Fargo? It’s a four-hour drive though flat-as-a-lefse cornfields. For info, see www.fargomoorhead.org.