Ness Nite – The Archer & the Artist 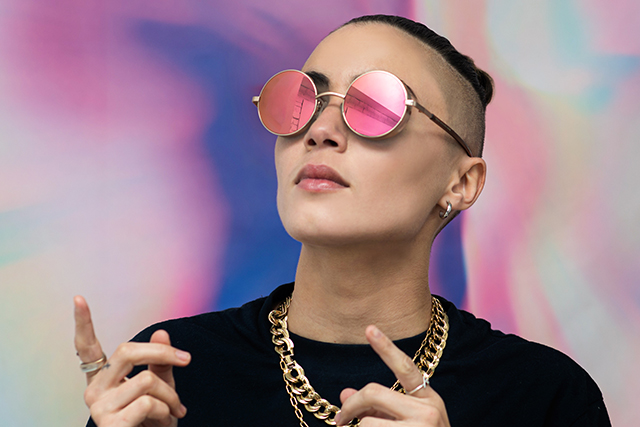 For a musical artist like Ness Nite—whose music is a mellow, layered mix of subaquatic R&B, rap, modern pop, an amalgamation of melted genres and ideas—it’s difficult to pin them down in one place. But to a cutting-edge artist redefining their space in the music industry, that’s more or less the point.

Growing up between Milwaukee and Chicago, the concepts of representation, stardom, and music were something Nite was fluent in early on: “I was actually really drawn to being, like, a different person as a kid . . . somebody who was more than I was.” Music was of course on their list—but so was Disney Channel. “When iCarly came out . . . I was like ‘Oh, I’ll make a web show.’” For a young queer kid looking to find their outlet for self-expression, the fantasy of becoming a bigger, better version of themselves felt like a focused goal.

The difficulty of being one’s self, especially as something “other” than the heteronormative Christian upbringing familiar to many Midwesterners, brought along the task of unlearning repression otherness entails. For Nite, survival meant going with the flow—a lifestyle that was entirely against their counter-cultural personality: “Everything about me basically subscribed to like, ultra-heteronormativity and just being like small . . . as a woman, I guess. Shutting down everything because, you know, I’m a person that likes to go against the grain.” Looking back, the idea of becoming a more realized person, an artist whose expression was far truer to their experience of the world, was the obvious dream solution. “I wanted to have some kind of character that was me . . . Something that was like ‘I may not feel this, but I want to pretend to feel this good.”

Fans of Nite’s music will recognize their desire to critique and respond to the masculine, traditional standards of relationships, culture and music production. There’s something inherent to Ness Nite that speaks directly to the other, imagining a greater space for future voices to express themselves with artistic and personal integrity. Lines like “I do it for my mama’s mama’s mama / I do it for my daughter’s daughter’s daughter” from the 2018 track “Watercolor Roses,” draw a direct line to Nite’s inspiration to find more than just their own success in the industry. Nite is working to pave the way for future generations of creators who might not have found the confidence or platform previously.

Nite’s entry into music began when they started writing songs in middle school—even playing violin for 10 years (by ear and imitation alone; Nite admittedly couldn’t read music). But it wasn’t until they moved to Minneapolis for college that music became a feasible career path. Programs like Ableton Live (a digital music production platform) gave Nite the freedom they needed to make music, experiment, and find the sound that best defined a young queer person growing into thier own. Nite eventually dropped out of school and released the 2016 EP Nite Time, an ethereal, introspective record that coincided with Nite’s own realization of their attraction to their best friend: “[Nite Time] was the first time I was like, ‘Oh this is literally about a girl’ . . . I was still in this mindset, ‘Is this even okay?’” Two years later, Nite released Dream Girl, a record far less subdued in its gay expression.

Reinvention and growth are always on the mind of artists like Nite, moving from Minneapolis to New York, and returning to Minneapolis in 2019. The concept of movement, of always moving on to the next thing, has been a major constant: “I’ve always kinda been like this . . . Trying to be a trailblazer in anything that I’m doing. It just makes me be excited to be alive when I’m trying to accomplish things.” When not working on their own projects, Nite has been learning to produce the work of others—including Minneapolis-based genre-bending R&B artist Jija—helping to springboard their peers and become a resource for early career artists new to the world of music production, networking and labels.

“Labels are so outdated, in my opinion” Nite says. “I have nothing bad to say about the label I was signed to. The person who ran it was a great person who helped me a lot. But as a system it’s a structural problem . . . It kind of sucks the life out of you.” Instead, Nite explains that new artists should focus their time and hard work on ways to build communities in their music and in their local scene. The more inventive the method, the better.

One of Nite’s newest interests lies, perhaps unsurprisingly, in cryptocurrency. In the modern age where even ownership over a specific jpeg file can become a (divisive and oft-confusing) form of currency, Ness Nite is considering new ways of making NFTs work for artists and their fans. “There’s not really a lot of music NFTs out yet . . . I wanna make short clips of music videos, or, like, maybe a different music video to the same song.” For Nite, an experiment in finding ways to cultivate fans while making money for production is well worth the exploration: “you can use them to incentivize people . . . to engage in the community you want to build as an artist.”

Nite’s NFT endeavor is not just for Jija’s SIREN project—they’re building a platform called 9thHouse that will help artists familiarize themselves with the NFT space and building in the Web3 world.

As a producer, Nite dreams of becoming a “powerhouse” resource for women artists to access without the male-dominated influence of the music industry. “I’m non-binary, but I’ve walked the world as a woman, you know. How the world sees me and how I’ve been socialized.” The experience of making music with their peers thus far without the interference of a male producer has cemented this idea in Nite’s mind: “It’s an interesting dynamic. I just decided to take it as something [male-influenced producers] don’t have—the music that they made and the music we’re making are very different.”

Ness Nite is an artist with their eyes on the next thing, whether it’s a new sound or a new way to build community. To an artist like Nite, it’s more than just doing what you’ve succeeded in thus far; it’s about constantly reinventing yourself and the space you’re in, which requires a certain familiarity with the grind. “I’m always thinking about work,” Nite admits. “ I put myself in this position . . . to like, have no choice but to succeed. Whatever setbacks or whatever happens, I need to use it as a learning experience and just figure out what to do next, trust my taste in ideas, and learn to be open to other people too.”

More information on Ness Nite can be found at www.nessnite.com