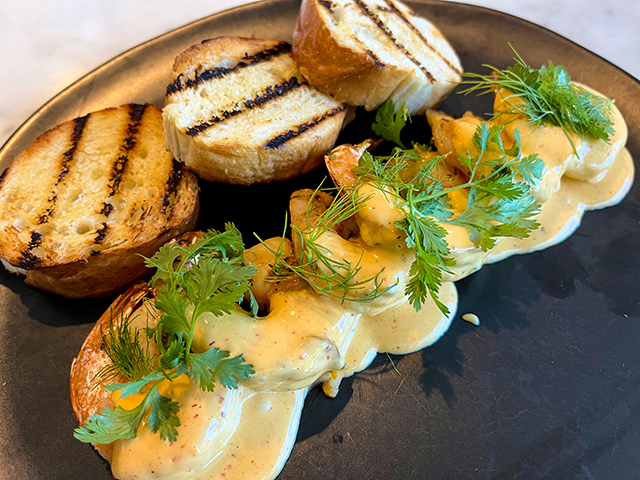 If restaurants were likened to movie plots, dining at Estelle would be like the one where you marry the guy next door—the sweetie-to-be hiding in plain sight, waiting to be discovered when the studly hottie fails to deliver.

Estelle—that homespun sweetie—resides in St. Paul’s Mac-Groveland neighborhood, where on a recent Wednesday the sleek dining room (with chef’s counter) was packed and a backyard sundeck beckoned. Tall wooden fencing, complete with an under-sea mural backing a small clutch of umbrella tables, proved perfect for this steamy summer night.

So did the cocktail list. I savored a Return of the Mac Old Fashioned ($13), constructed with house-made spice syrup and orange-sassafras bitters, while my companion got all girly with the Lawn Flamingo ($11)—a highball of Pimm’s enhanced with everything from lychee to a long tongue of cucumber—“like a party in your mouth,” opined our server, who deserves a shout-out for den-mothering us through the delightful evening. The wine list merits applause as well, with many, many BTGs anchoring a list that favors pours from Spain, Italy and Portugal, in line with Estelle’s menu focus.

We happened to visit during Restaurant Week, where a three-course $45 menu (with choices within each course listing) had been created to spotlight favorites on the kitchen’s regular list. Beginning our feast with the shrimp al ajillo was a no-brainer: It’s a show-stopper on a menu created by Chef Jason Hansen, who’s backpacked his way through Spain and Portugal and fired up stoves locally at 112 Eatery, Tilia, and others, as well as at Chicago’s noted Blackbird.

He learned, it’s clear, that simplicity and prime ingredients are the keys to honest, tasty and (mildly) inventive food. The plus-size shrimp proved sweet in taste and bouncy-fresh in texture, providing a perfect canvas for a garlic butter sauce subtly enhanced with sweet peppers, dill and cilantro. The need to share with my partner barely won out over downright greed.

However, in return the bacalao fritters she ordered were passed in my direction, too, and eye-opening they were. I generally avoid bacalao –salt cod—as painfully salty, but not these. Tempered by mashed potato, the fritters went down well, guided by a flavor-brightening, habanero-enhanced tartar sauce.

For our main courses, we dithered over an eggplant parmesan, my weakness (among many) in an old-time Italian kitchen, until our server swayed out vote by agreeing that, yes, we could savor that favorite on many another menu, but here—here!—she counseled, go with something a little different.

We did, of course, starting with a pasta presentation that employed basil, sunflower seeds, little green tendrils of haricots verts and firm, sweet fingerling potatoes, all lightly dusted with Parmesan—a take-off on the bean-and-potato pasta-topping favored in, say, central Italy but rarely in central Minnesota.

The pork-driven second course also caught our eyes. Quantities of moist and tender, sweet-savory shreds enlivened what might be your grannie’s Spanish rice, along with granny-averse shishito peppers, toum (a hard-working Middle-Eastern creamy garlic sauce) and sweet peppers: Spanish rice a pork-loving Spaniard would savor.

Or choose a cheeseburger, which reads like the classic it is, but is served with patatas bravas, those addictive and mildly spicy potato nuggets that serve as bar food throughout Spain.

On to dessert. Choose between what sounds like an over-the top candy bar (yum!), Portuguese egg tarts, a peach pie cake, and “Snack Pack” budino. That budino—pudding—went down well: both the smooth milk chocolate version and its sidekick in vanilla. Bits of chewy brownies and a crunch of cocoa nibs add to the party.

The cake, born of fresh, sweet, juicy peaches, and moistened further with sour cream in the batter, employs dried flower petals and flowery St. Germain liqueur. It’s good, but my socks stayed on. Plus, you’re going to have to ask your server to explain all those fancy names for flowery flavors.

Bottom line: Estelle is a small neighborhood café too sweet to let the Mac-Grovers keep to themselves.