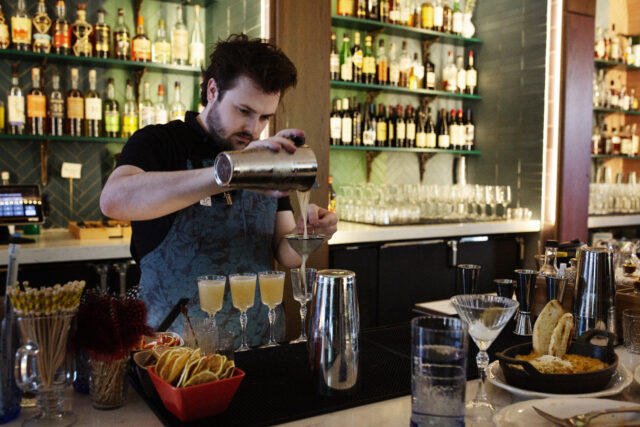 Photo by The Restaurant Project for Mr. Paul’s Supper Club

Mr. Paul’s is not your daddy’s supper club—unless your father were born with a silver spoon in his mouth (and gifted with an attractive stocks portfolio) in Edina.

This, instead, is a brand-new, purpose-built sleek and polished outpost in the suburban city’s epicenter of designer labels at 50th & France. It’s a pleasant, airy setting graced with lofty ceilings, glass window walls and well-spaced (mostly four-top) tables, plus cushy half-circle booths facing an open-to-view kitchen in the rear.

In a word, posh. With prices to match. Nonetheless, we two invaders from a less-polished segment of the metro were made to feel warmly welcome and were well-cared-for both by the evening’s hostess and our new best friend, server Sara.

The menu’s focus, beyond its centerfold list of steaks and chops, is on the lusty flavors of New Orleans. Thus, the appetizer/small plates list ($14-21), meant for sharing, lets the good times get rolling with fare ranging from crawfish gratin to fried walleye; from steak tartare to mushrooms stuffed with tasso ham and fontina cheese.

We began our explorations with an order of grilled oysters ($17), which turned out to be a highlight of the evening. Four sleek and unctuous, plus-sized critters arrived (rather than a typical restaurant’s offering of three, which causes the break-up of many a relationship over who gets to devour the extra one). They’d been broiled just past raw (in other words, perfectly), then bathed in Parmesan butter—a nice twist from the usual heavier cheese topping—and lightly sprinkled with gremolata: that sprinkle of parsley, lemon and a hint of garlic that can accent an oysters’ creaminess. We were tempted to lick the shells (but you don’t do that in Edina).

Our second app was an order of boudin balls ($14), which in the South I’ve devoured from roadside coolers, pop-ups in gas stations and the like—in other words, hard-scrabble, off-the-menu treats sought after by devotees of this blue-collar art form. They’re golf balls of seasoned rice abetted with some trimmings of the nearest animal—usually pork, but roadkill will do. Mr. Paul’s are chicken-fried and presented with a tomato-kissed remoulade sauce for dipping. Don’t go home without ’em.

We progressed to an order of duck and Andouille gumbo ($8/14), born of the usual Southern trinity (onions, celery, green peppers), thick with big hunks of duck meat (whose flavor had already fled into the broth) and bits of sausage amid the rice in a gumbo broth—not as deeply-flavored as a customary, slow-cooked and stirred-forever New Orleans roux would deliver, but certainly acceptable for Minnesotans’ palates. However, it arrives topped with—what?—potato salad. Why? I get that somebody in the kitchen is trying to think of a unique tweak, but this adds nothing wonderful to the dish. Or order the iceberg-based supper club wedge ($13) or grilled romaine ($13).

We proceeded to the seafood section of entrée listings ($33 for our order of crawfish etouffee to $44 for diver scallops). Our serving proved generous, indeed. We split it and still left with a doggie bag. It’s a nice, and genteel, rendition, lush with plump, perfectly-timed shrimp and tinier, sweet-to-the-bite crawfish, abetted by rice infused with scallions. Had we been up to it, we could have proceeded to the Creole and Club Classics section of the menu ($17 for a burger to $39 for duck breast, with stops along the way for meatloaf or short-rib Stroganoff). Or those steaks we mentioned, ranging from a $28 strip to a $64 porterhouse. Side accompaniments—cornbread to red beans and rice, mac ‘n’ cheese, etc.—run $10.

Instead, on to desserts! The four choices ($10-12) include apple crisp, a triple chocolate number, a sweet-potato crème brule, and our selection (duh!), beignets—six to an order. Of course, we were wearing black, and of course, in true Café du Monde style, we came away snowed with powdered sugar. But, unlike the signature doughnuts of that New Orleans café, these proved less light and supple and striated with air pockets: more like a raised doughnut in texture. But don’t miss ’em, nonetheless.

Mr. Paul’s drinks menu ranges from wine and beer to a lusty list of New Orleans-style cocktails (Gin Fizz, Sazerac, King Cake Milk Punch, etc. $15 range), to help those good times endure in Edina. By the way’ who’s Mr. Paul? He was Chef Tommy Begnaud’s grandfather. And, just as back in his day, we were offered a souvenir book of matches as we departed.