Miss Richfield 1981 – All Hail The Queen 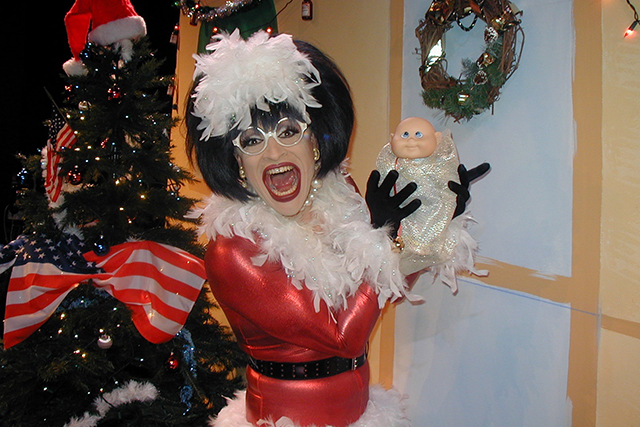 With the holiday season looming and the leaves showing off their yearly glamour, our favorite local pageant-winning drag queen is busy: Miss Richfield 1981 has just wrapped up another successful summer in Provincetown, MA, and will soon be celebrating her 40-year career with her annual holiday show—but not before performing a couple of quick cruises through the tropics. I was able to catch up with Russ King, the man behind it all, to learn more about this stunning and everlasting persona.

A Richfield, MN, native, Miss Richfield 1981 is a Minnesota gal through and through, with a strong love for her country and an enormous heart. King cites his late mother as an influence, and that maternal warmth is comforting and familiar—reminiscent of the first time your aunt told you a joke that required a wink after the punchline. Another influence is Frances Faye, a bawdy, bisexual cabaret artist who performed for gangsters during prohibition. “She was brash, outspoken, and amazing! A trailblazer and godmother to our community,” King says. Miss Richfield continues this long tradition of subversive women by showing us—through humor and song—that vulnerability is strength, that authenticity is to be cherished, and that being human can be fun: think Dolly Parton meets Lucy Ricardo, with a decent helping of Mae West.

When asked how he got his start in drag, King says, “I first did drag at a Miss America party with friends. But I found it fun and wanted to try it on stage. So I took that pageant persona and Dee Richards offered me an opportunity to work on the stage of LaFemme. In the world of comedy, it’s important to have roots and a story. So the pageant gave me a backstory for my character.” At the time, Gay 90s and other clubs in Minneapolis had been doing drag shows for about a decade, and the culture was just beginning to branch out beyond the queer community. “When I first started at the 90s,” Richfield continues, “Dee Richards, Roxy, Camille, Cee Cee and Tiffany had the 90s show running so professionally! It was such a magical time with a largely LGBTQ audience. Now I think we’re in such an exciting time for the drag community! RuPaul’s Drag Race opened up the scene to a new audience of young people—and, let’s face it, that’s the future! It’s exciting to see the kids getting so excited about drag and following the queens around and taking selfies.”

It’s almost difficult to remember that not too long ago, nontraditional gender presentations and homosexual behavior were criminal offenses. Minneapolis passed an ordinance against cross-dressing in 1877, and legal protection from discrimination on the basis of sexual orientation or gender identity wasn’t passed until 1992; Minnesota was the first state to pass such legislation. Those of us who weren’t around to see Stonewall or the AIDS crisis must recognize what a risk it used to be to be openly queer, or simply perform in drag. The drag communities in Minneapolis and elsewhere began behind closed doors, celebrating and supporting each other as family, and now our moms watch RuPaul and our coworkers sink bottomless mimosas at drag brunch. The joy of artistic expression—and personal truth—cannot be contained.

During her live shows, Miss Richfield facilitates light-hearted conversation about such serious topics, interacting with audience members from all over the world. Her past shows have contained both religious and political themes, but as any good Minnesotan, any judgment is (mostly) withheld. Leading with kindness and a healthy lack of shame, she’ll make you laugh, complain about her itchy wig, and then show you how to strut in seven-inch heels. She even plays the saw, which I imagine was instrumental in her 1981 pageant win; her rendition of “Somewhere Over the Rainbow” is both haunting and irreverent.

Miss Richfield won’t take the last cookie on the plate, but she will stand up for what she knows is right: “I was so proud of how people stood up and vocally and physically responded to the killing of George Floyd,” King says. “Those things were happening all over the country, but the protest started in the Twin Cities. That’s a badge of honor for us.” Her Minnesota pride is contagious, even when on the road. “I try to laugh about the long bye-bye’s and hot dish, but also extend an educational message about our awesome Senator Amy Klobuchar, our LGBTQ+ community, recovery community, arts community—I could brag on and on! I hope people understand how appreciative I am of the Twin Cities and the amazing opportunity it gave me to begin my work as an artist. I will always cherish and appreciate the Gay 90s, the Bryant Lake Bowl, and the Illusion Theater! These are institutions that were instrumental and helpful in offering me a platform for my art. I can’t imagine a better place to have started my work and to return each holiday season for a wonderful homecoming!”

This year’s holiday show, “40 Years on the Holiday Throne,” will be at the Illusion Theater’s new location in Kingfield, running from December 8 – 19. Tickets will be on sale soon, and if her summer in Provincetown was any indication, you might want to snag one quickly. After well over a year of lockdown and face masks, we’re all ready to be serenaded by a beautiful baritone in pearls.