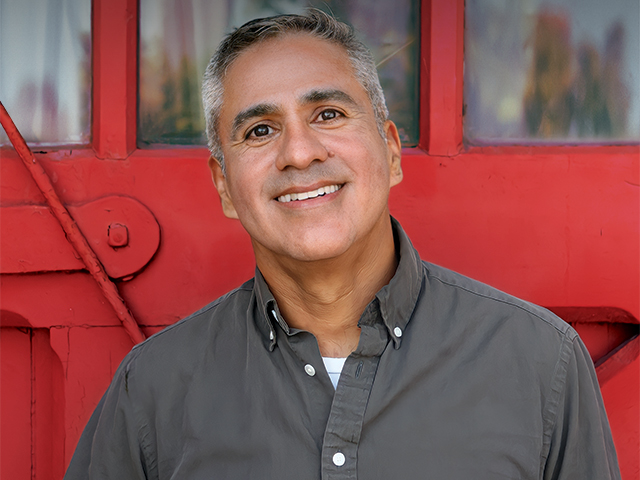 After a nearly two-year-long national search, Mixed Blood Theatre has announced Mark Valdez as their new Artistic Director. Although Valdez demurely refers to himself as an outsider who is excited to uplift Minnesotan stories of all types, the reality is that he has had a fruitful, longstanding relationship with the Twin Cities and Mixed Blood Theatre: his first directorial job with Mixed Blood was back in 2007, he has directed nine plays there, and has been its Resident Artist twice.

Within Mixed Blood Theatre, the excitement for Valdez to step into this role is effusive. Jack Reuler, who founded Mixed Blood in 1976 and has been serving as its Artistic Director since then, is confident in Valdez’s ability to fill the role, saying that “[Valdez’s] belief in what theatre can be – as an art form, tool for social change, and instrument for justice – aligns with Mixed Blood’s new strategic direction and our worldview.” Board president Tabitha Montgomery says, “His creative dexterity, curiosity, and approach will help the organization take new strides in activating champions for equity and justice on and off the stage.”

My conversation with Valdez reflected the same qualities described by his colleagues. Valdez is enthusiastic about challenging preconceptions surrounding what theater is, creating space for undervalued voices to be heard, and creating the kind of art and conversations that make a positive impact on their communities.

In this vein, Valdez has chosen to begin his role as Artistic Director at Mixed Blood Theatre in a unique way. “When you curate a season, you put together a perspective or point of view. It felt weird to be like ‘here’s my season!’ because I don’t know anything…I’m an outsider,” Valdez explains, “So in this first year of programming we’re not going to do a season of plays.” Instead, Valdez will curate a series of hyper-local performances meant to reflect the diversity of the Twin Cities.

This series, which is called 12×12, is indicative of what Valdez will bring to Mixed Blood Theatre in the years to come. Valdez explains: “I’m going to have twelve people introduce me to twelve artists who will work in twelve neighborhoods. Each artist will create an artistic response and we’ll have a picnic or party or gathering where we share that art back with the community. At the end of the season, you can see all of them together in a day-long ‘Twin Cities Meet Yourself’ kind of event.”

Another distinctive element of this series is that Valdez wants to collaborate with both theater and non-theater artists. He mentions collaborating with chefs, novelists, choreographers, figure skaters, anyone with an artistic sensibility and a strong connection to their community. “This is a genuine invitation,” says Valdez, “If you want to participate, reach out! We will commission artists! I’m a big believer in good ideas live in many places.”

The final key element of 12×12 is the recognition that not all communities are geographical. Ten of the twelve performances in this series will be defined by the neighborhoods in which they take place. The remaining two will reflect identity instead. Valdez elaborates: “For those, we are working with the trans community and the disability community.”

Valdez’s emphasis on representation and community building is practically his artistic watermark, which aligns well with the Mixed Blood ethos. It was not until he was 21 that he first saw someone who looked like him on a stage. “And this was in Texas,” he says, “It’s not like there weren’t Latinos around.” Valdez saw the lack of representation of his own community and took the long view. He built his career around finding opportunities to elevate the voices and stories of many under-represented communities – not just his own.

Valdez was drawn to a series of questions that still inform his work: “Who gets to make art? Who has access to culture and the support of funding and space and support and whose stories are being heard and told and who gets to tell them?”

Mixed Blood Theatre has built a reputation as a community-oriented theater and Valdez’s “Good Neighbor Framework”, has been a large part of that. “During the COVID shut down, we started a food pantry. At this moment where a lot of people couldn’t get out or where public transportation was dangerous, we used our space to distribute food.” The Good Neighbor Framework also inspired a shift in programming to respond to the artistic sensibilities of the largely East African community in the Cedar-Riverside community.

Mixed Blood has built itself to be a welcoming place for everyone, which is reflected through the material they perform, their accessibility practices, and the people they work with. “Mixed Blood has a long tradition of working with disability, trans, Latinx communities [and more] and that’s going to stay!” says Valdez.

When I push Valdez on the boundary between art and community building, he pushes right back, “It [isn’t] a useful distinction,” he insists, “We can listen. We can be adaptive. Those skills as artmakers are the same skills we draw on to be that good neighbor…We exist as a public benefit organization. We engage our friends and neighbors and supporters – people for whom this is home.” For Mixed Blood and for Valdez, a theater does not just tell its community’s stories – it actively seeks to make the real-world versions of those stories better.

Above all, Valdez wants your help in his endeavor as Mixed Blood Theatre’s new Artistic Director. No matter how voiceless or invisible or unrepresented you might have felt in the past, Valdez and Mixed Blood want to tell your stories. “Make this your home and help,” says Valdez, “It’s a really ambitious and big idea and we will only do it with the help of others.”