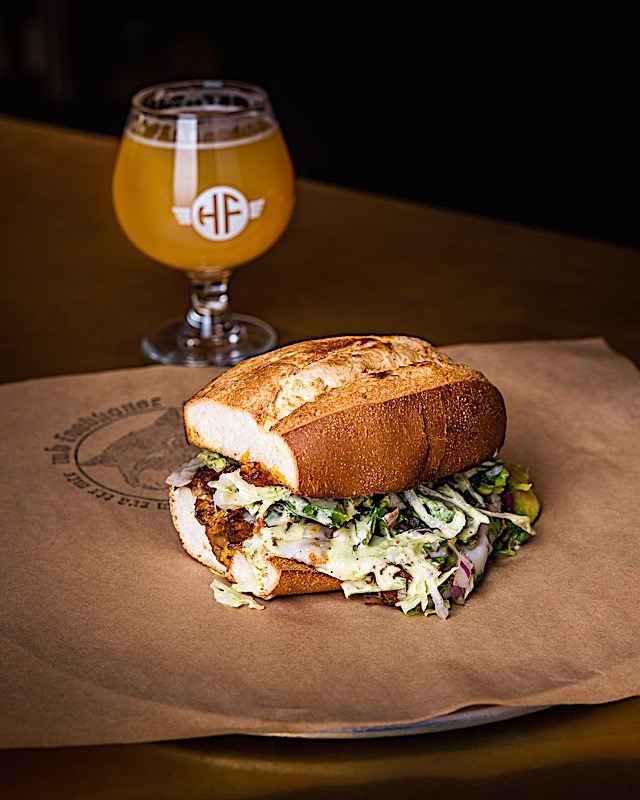 If you had asked the Kristen Martinez and Sean Lindhal of early 2020 what they thought they would be doing in June of 2021, they could never have guessed that MB Foodhouse would be the answer—although every foodie in Minneapolis is lucky that it worked out this way. Kristen Martinez, front-person at Moodie Black and creator of MB Foodhouse, was nice enough to guide me through how she and Lindahl went from bandmates to teaming up with Martinez’s partner Jamee Varda to make MB Foodhouse a reality. 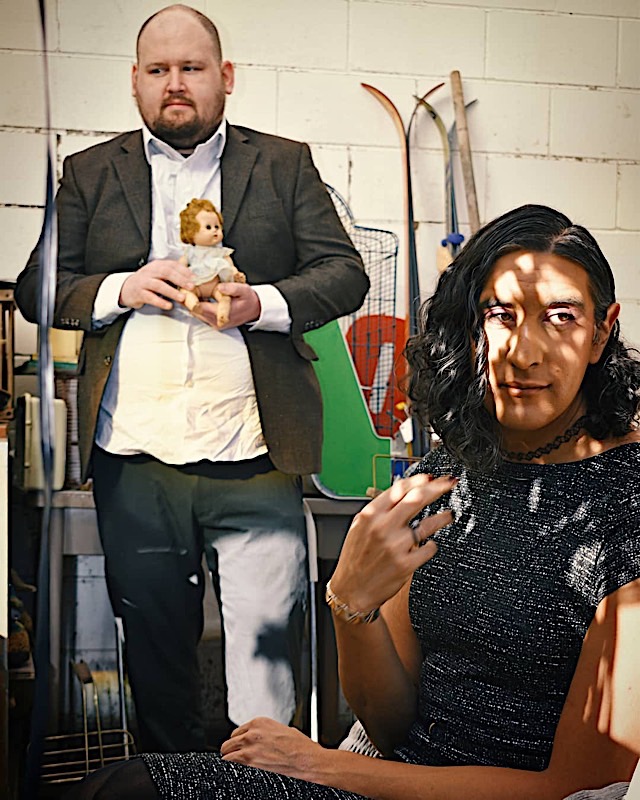 One Dream Deferred, Another Premature

At the beginning of 2020 Martinez and Lindahl were getting ready to take their band, Moodie Black, on the road. “We had a new record and tour lined up to release weeks before the first major shutdowns,” Martinez says, “everything we had going was cancelled as a result.” As the months wore on and it became clear that live music would not be back any time soon, Martinez realized that she had to find something else to do: but what?

“MB Foodhouse came into fruition because of the Pandemic,” Martinez says, “I have been a cook my entire life, primarily at home, but also I have worked on taco trucks in L.A., and a few places in the cities as a line and prep cook.” With one dream suddenly on hold—a dream Martinez and Lindahl had been building for the last decade—it was time to revisit a different dream.

MB Foodhouse seemed destined to succeed. Fans of Moodie Black’s music were incredibly supportive. “Thanks to our supporters and following with MB we were also able to raise a little bit of funding to get things started,” Martinez explains. “We just wanted to fill a hole we think exists in the Cities that offers scratch made Tex Mex with a focus on simple breakfast tacos…and more,” says Martinez. 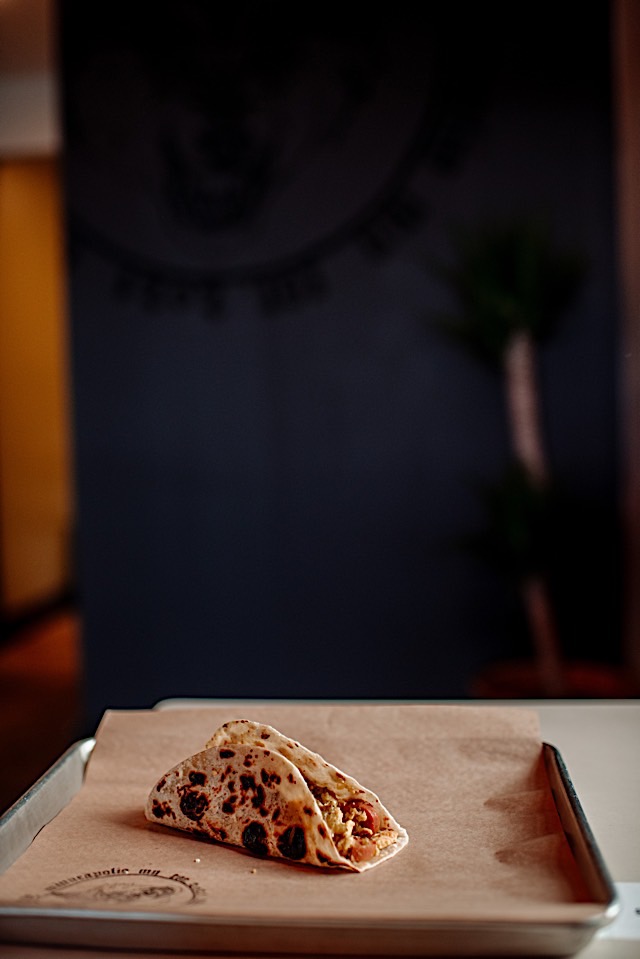 Initially MB Foodhouse operated—and thrived—solely through pop-ups. Then one day, during her usual post-run chat with the owner of Five-Watt coffee, Martinez realized that MB Foodhouse could have access to a regular physical space if they wanted it.

“One thing led to another and I couldn’t pass up some opportunities with Five Watt to bring our food spot into a fixed location. It all just fell into place,” says Martinez. She had considered that she might open a restaurant one day, but always assumed that it would happen “much later than it has.”

MB Foodhouse has “a simple fast casual type vibe, that cooks sustainably and with purpose,” Martinez explains. They cook offsite at a commissary, so there is a limited amount of food each day. “Make sure to come early!” laughs Martinez.

If you need a little inspiration the first time you go to MB Foodhouse, we recommend starting with anything involving the chorizo. Chorizo at MB Foodhouse is all house made with New Mexico red chili sourced directly from the Southwest. The breakfast tacos are also an MB Foodhouse gold standard – flavorful and just the right amount of fuel to get your day started. 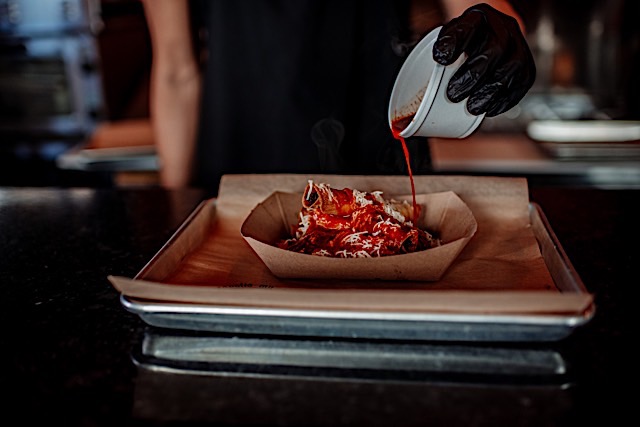 Above anything else, though, Martinez recommends the taquitos. “It’s our ode to my hometown of El Paso,” she says, “They are small, rolled tacos filled with beef/potato/onion and baked ‘til crunchy. We top them with cheese and pour a red sauce on top.” That red sauce is something special—made with the same red chili in the chorizo. The taquitos are then topped with pork drippings, MB Slaw, and roasted garlic poblano crema, making a dish that is as aesthetically pleasing as it is tasty.

“A big part of the foodhouse is centered on trying to foster an inclusive space,” Martinez says, “Many places talk about being inclusive but it’s a truly difficult thing to maintain…[W]e are trying to be a bit more aggressive in our approach to demanding respect for lgbtq/bipoc humans in our space, by being vocal and sharing content on a weekly basis that reminds our customers to be mindful.”

This stance of radical inclusivity will not surprise anyone familiar with Moodie Black. “The Foodhouse is also an extension of the work we do with Moodie Black and our…podcasts,” Martinez says. Martinez has two podcasts: Transdemic, which focuses on educating people about trans experiences and telling trans stories; and Moodhouse, which is an art and culture podcast. “[We use] our podcast platforms to have conversations with other POC people and marginalized groups,” explains Martinez. 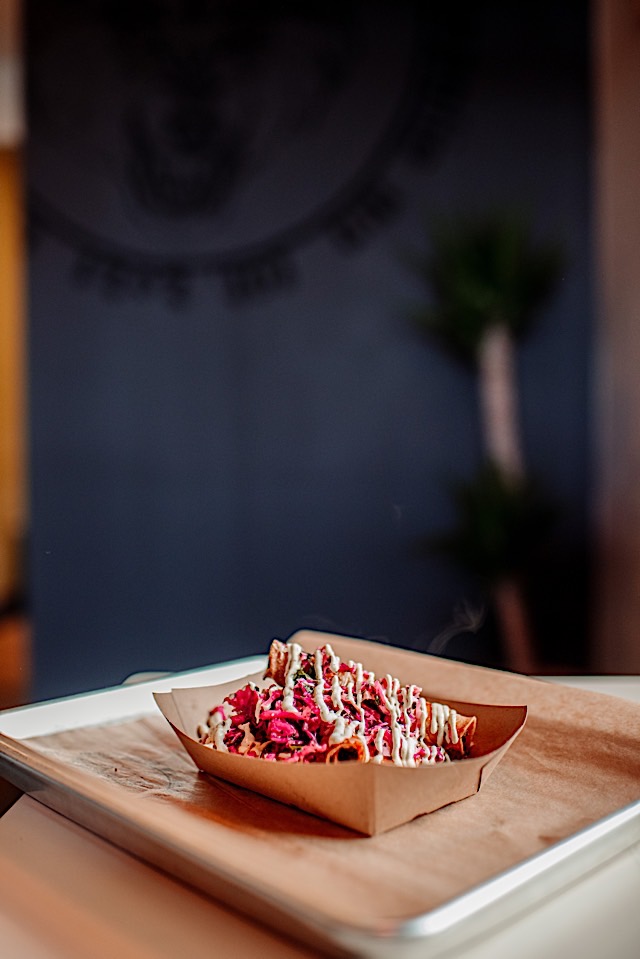 MB Foodhouse has also hit the streets to show their support, occasionally bringing food out for protestors. “I try to balance my safety as a transwoman with being supportive. It’s a difficult space to be at times,” explains Martinez, “I’m happy that the trial turned out as it did…but there are many cases left to be rectified.”

One thing is for sure: MB Foodhouse is a great spot for more than just breakfast tacos. Go there for the good food. Stay there for the good vibes. “We just want the cities to know that we are an inclusive space and hope queer people can find us a bit of a safe haven to have great food!”