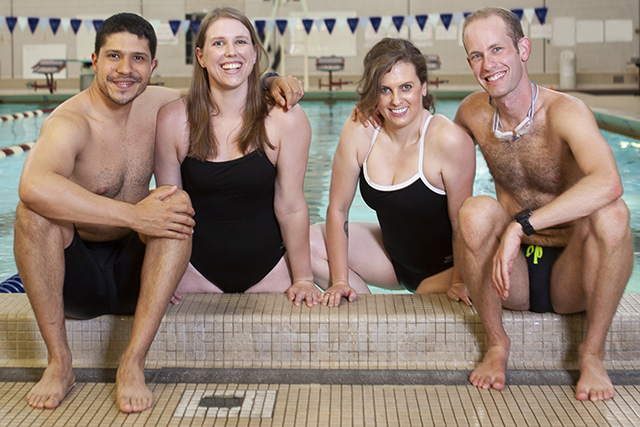 “Persistence pays,” says Josh Tomashek, one of the coaches of the Minnesota Ice Swim Club. He and his fellow coach Luke Paquin have recently breathed new life into the LGBTQ focused sports team and are ready to take it for another lap. Tomashek says, “a lot of the gains that are made in swimming really take continuous longitudinal effort in the pool.” Just like its sport, the Minnesota Ice Swim Club, and the benefits it provides for its community, continues to cash in on its efforts to endure.

The original swim club was organized in the early 90’s as the Minnesota Rainbow Trout and had their first international debut at the 1994 Gay Games. By the late 90’s the team was renamed Minnesota Ice but experienced a significant ebb and flow in membership and competition participation after that. There were times when membership was extremely low. There was one member however, Brian Jacobson who persisted and kept the team alive until 2019 when Paquin and Tomashek stepped in.

They reached out to Brian and shared with him their desire to formalize the team, to bring back the community. “We asked if we could continue on with the name as a homage to the people who came before us, who laid the groundwork for this legacy of queer swimming in Minnesota,” says Paquin.

Shortly thereafter, the pandemic pulled the plug on their momentum, but if the last 30 years are any indication, it wasn’t going to stop them. As they celebrate their third anniversary since reorganizing they have more members than ever before. “We’ve grown our team to be really welcoming and inclusive of everyone,” says Paquin, “ It’s not just a queer swim team, it’s a team for our supporters, we have a fair amount of allies on our team. It’s a nice way to build community within the LGBTQ community at large and it’s a great way to interact and meet people from around the world.”

The team’s member’s span a wide range of ages, sexualities, and backgrounds. This is primarily in part to Paquin and Tomashek’s efforts to make team membership accessible for underrepresented groups. Tomashek says, “One of the things that we did from the beginning was pricing our membership far below other United States Masters Swimming (USMS) teams in our region. Last year we also started offering discounted memberships for trans-identifying and BIPOC folks.” Minnesota Ice also consciously budgets for a built-in assistance fund for their members who are struggling to afford being on the team or struggling with the expense of attending swim meets.

Folks join the team for different reasons. Some come to improve their times from previous swimming experience, others are drawn because they are training for a triathlon. Most join because they want to be a part of a supportive and community oriented environment. “We do our best to try to figure out each swimmer’s goal and encourage them toward what they want to get out of the team,” says Tomashek.

For Minnesota Ice’s next lap, to support their growing team, they are going to focus on developing ongoing fundraising efforts. They are looking for corporate sponsors, private donors, and new members to raise more funds to be able to pay their coaching staff for volunteering their time, securing practice spaces, and to fund scholarships for those who may not be able to participate in the team or in competitions due to socio-economic restraints.

In order to get involved Paquin says, “It’s just a matter of showing up and being involved, however you want to be. We’re always looking for people who want to step up and organize more social events or be a part of the committees we’re trying to start.” You don’t need to have a background in swimming but it does help to be proficient in swimming to join.

Those that do join the team will not only find a fitness outlet but a supportive family with a strong social bond. Minnesota Ice’s members organize grill outs, pool days, and happy hours in addition to the exciting traveling they do together to their swim meets. They recently competed in Palm Springs, CA at the 2022 International Gay and Lesbian Aquatics and will be competing in the Gay Games in Hong Kong, China in the coming year. “It’s important for a lot of people, and I think it’s important for me,” says Paquin, “Myself and people in general, define themselves by the things that they’re involved with. I’ve always defined myself partly by being a swimmer and partly by being in the gay community and I just think it’s really important to have that outlet for others if they’re seeking it.”

With the variety of motivation for members to join and the different skill levels, Minnesota Ice provides a low pressure fitness option that has something for everyone. “It’s not about the competition, it’s not about winning things, even though it’s nice,” says Paquin, “I think other metrics of success are people who come to us and say you got me to move again, you got me to be a part of the community. I come here to socialize and to build deeper relationships with people, and that’s really cool.”