Let Us Sing One Song for….Louisville! 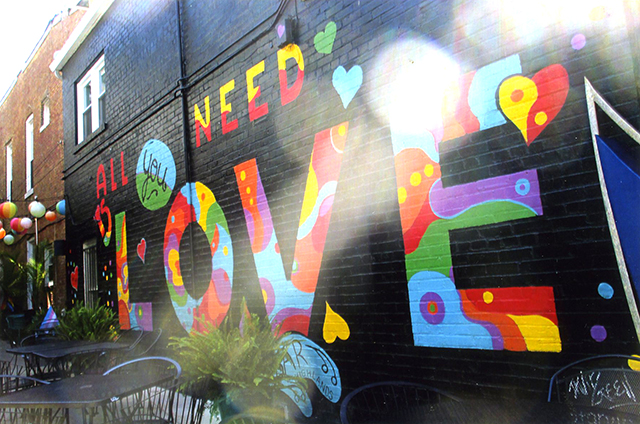 What draws visitors to Louisville? Well, for sportin’ fans, there’s that little event called the Kentucky Derby the first Saturday in May. But no need to wait: Year-round tours of the Churchill Downs racetrack and museum allow you ogle the horse barns, watch the pre-race promenade, and take a trackside seat at a race amid the screaming fans.

All tours include a surround-screen filming of Derby Day, climaxing in a song more dear to a local’s heart than the National Anthem—“My Old Kentucky Home” (BYOH: Bring Your Own Hankie). The new Black Heritage in Racing Tour reveals how African-Americans gained fame as premier jockeys before Jim Crow squeezed them out.

Baseball fans follow Louisville’s Main Street to the iconic Slugger Factory and Museum; you’ll spot it aside the giant photo-op baseball bat out in front. Louisville also is home to another slugger.  Native son Muhammad Ali rates his own museum, which traces his life in the boxing ring and as anti-war protester. You’ll find his grave in the green, serene Cave Hill Cemetery, not far from another homeboy’s—Col. Sanders of finger lickin’ fame.

It’s easy to hoof it from one must-see museum to another along Main Street as Whiskey Row blends into Culture Row, anchored by the world-famed Actors Theatre, currently outwaiting covid. Peek into the Kentucky Museum of Arts and Crafts, saluting works by Kentuckians; the quirkier the better. It boasts a great gift shop, too. Across the street, the 21C Hotel acts as an avant gallery, featuring art backed by a social/political statement (currently including the Statue of Liberty as a Trojan horse). You’ll spot it by the giant reproduction of Michelangelo’s David outside.

Downtown’s newest museum, spotlighting the African-American experience, is called Roots 101. The story begins with heroic sculptures from Africa’s Benin, where many an enslaved African started his unfortunate journey. Lamont Collier, its founder, showcases these statues to awaken African-American folks’ awareness that they, indeed, descended from a race of kings. He hands me weighty chains and manacles to bring home their fate. Then came the KKK and demeaning symbols imposed by white folks—Little Black Sambo, Aunt Jemima, a blackfaced Al Jolson—until sports emerged as “the great equalizer.”

Trace the history of the Kentucky African-American music scene and other accomplishments, born of every family’s Big Mama; here, her living room is crammed with the family photos every Mama cherished. The “Protests to Progress” years include a memorial to our own George Floyd. Then head to downtown’s Fourth Street, lined with a dozen memorial stops—sites of sit-ins and such—along its Civil Rights Trail.

But Iet’s be honest: I’m here for the drink. It’s easy to love a city that has adopted the Old Fashioned as its civic cocktail—for Louisville is all about Bourbon, reaching back to the debut of downtown’s first distillery, Evan Williams, in 1780. (The city itself was launched along the banks of the Ohio River just two years earlier.) The Frazier Museum spells out what it takes to make great Bourbon, from pure water to oaken barrels to human expertise.

Sign up for  a tour and tasting at Evan Williams to get the skinny from local African-American bartender Tom Bullock (thanks to his re-enactor) on how to make the perfect Old Fashioned, using the method he penned as the  first African-American to write a cocktail recipe book. Then flaunt your new knowledge at the speakeasy of your choice—maybe Omni Hotel’s Pin + Proof (yes, aside a bowling alley). Or Hell and High Water—a classy hideaway marked by a white light in a hidden alley. (Be nice to your concierge and you’ll get directions).

The newest distillery in town is a maverick.  “We’re bringing American Brandy back to Bourbon country,” declares a tour guide at Butchertown’s Copper + King as he pours sips  from barrels stored where music plays 24/7, Bach to Bob Dylan,  “to keep the molecules moving.”

Linger to wander this former meatpacking district, admiring its quirky shotgun homes. Then pop into Play, the city’s largest LGBTQ nightclub, with drag shows all week. The city’s new soccer stadium anchors this ’hood, not far from a brand-new 23-acre Botanical Garden reclaiming a once-unsightly landfill.

The Highlands is home to gay bars Big Bar, Nowhere and Chill, clustered on the main drag and also Le Moo, where drag queens strut through the dollar-waving crowd during weekend brunches. The Highlands gives way to NuLu—not so ‘nu’ anymore, but boasting scads of the creative indie shops and cafes that earn Louisville braggin’ rights as a funky city.

The Shelby Park ’hood is newer still, coming into its own as a go-to destination. It’s anchored by the new Logan Street Market—food stalls, cheese shop, microbrewery and a hometown vibe. And if you’re looking for trouble, you’ve come to the right place: Shelby Park’s Trouble Bar delivers on its promise.

But Louisville’s best art is not manmade; it’s the sunset show captured by trekkers across the new(ish) Four River Bridge at Waterside Park. Amble over to Indiana to say hello, then retrace your steps under the twinkle of LED lights.

Make you hungry? Trust me, you’re in the right city. Butchertown’s shiny-bright Naïve cafe gives vegetarians their due in don’t miss dishes like Nashville hot cauliflower –deep-fried with a cornmeal coating, then cooled with a ranch dip. Another star: avo mounded on toasted sourdough, gussied up with tarragon ricotta, berries and mint. Seafood and burgers, too.

Start your day at Superchef’s in The Highlands, with pow! comic-book décor and a menu to match. Chef Darnell, who doubles as a TV guest, is the action figure behind killer dishes like four-cheese shrimp and grits with chimichurri and sweet red pepper relish; avo toast supporting marinated tomatoes, lemon pepper, candied bacon, arugula, radishes, honey and mustard; and eggs Bennie atop deepfried grits slathered with Mornay sauce. And, just to tide you over until lunch, stop at Kizito, on Bardston Road, for cookies the size of your face. Mine: The Lucky Kentucky, XXL with pecans and chocolate chips.

Add Seafood Lady to the duo above, and you’ve got three African-American chefs who, like Ali, deliver potent punches. NuLu’s new Seafood Lady, set in an explosion of Caribbean colors, teases your appetite with starters like gator tail and fried oysters. Then it’s on to a shrimp and snow crab boil or my choice, shrimp and grits, served in a Martini glass the size Pau Bunyan could accommodate. Po’ boys, hush puppies, and banana bread pudding, too.

Back on Main Street, the food scene’s smokin’ hot at Repeal, where every night folks celebrate 1933’s end of Prohibition with a signature cocktail fueled by Buffalo Trace Bourbon. The chef sends out Parker House rolls as you scan a menu of prime beef galore. We shared a plate of steak tartare, then tomato-braised short ribs sided (yes!) with taleggio grits to enjoy on an above-street patio, made for romance.

The next evening we sneaked below stairs to a cozy, equally lovey-dovey hideaway called Wild Swann. Its menu of small plates leads off with a deconstructed shrimp and grits—jumbo critters atop cubes of baked grits. Next, a pair of deliriously succulent Kentucky lamb chops lounging on a bed of spinach, followed by a couple of bison sliders. The grand finale–Bourbon-butterscotch bread pudding.

Oh, one more hint: Before you hit Churchill Downs, peel off at its longtime neighbor, Wagner’s, for a diner breakfast, where bacon, easy-overs and grits share a plate as you people-watch the jockeys, trainers and their groupies starting off their day.

I told you that Louisville treats visitors right. More proof: The town boasts not one, but two Pride celebrations: Louisville Pride in September and October’s Kentuckiana. To plan your escapade, visit www.gotoLouisville.com. Then start packing.