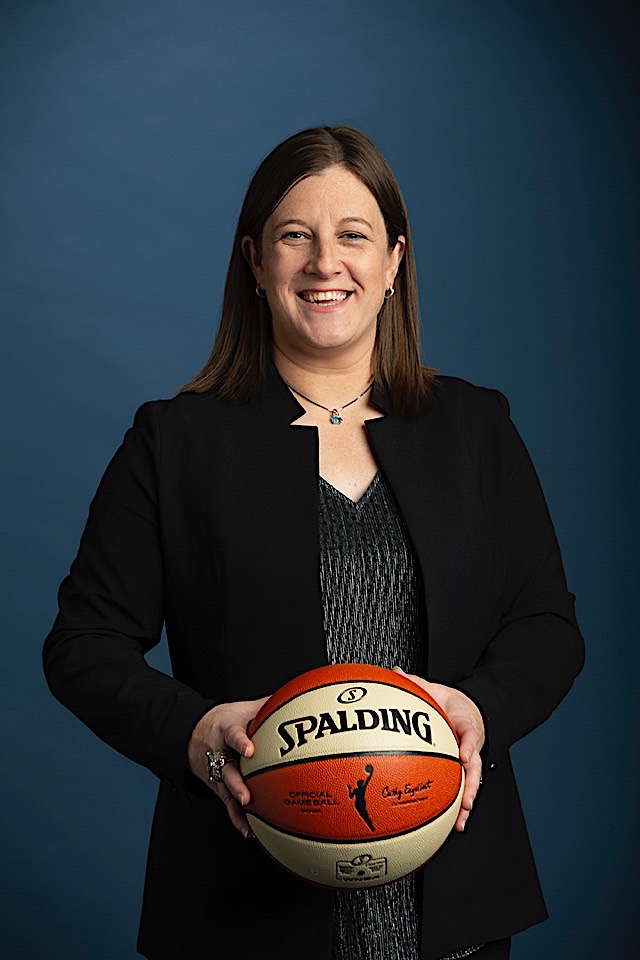 Organizational Involvement: President of Business Operations for the Lynx, board-member of the Ann Bancroft foundation, on the 2022 NCAA Women’s Final Four Local Advisory Council and Equity Assurance Committee, part of the Twin Cities Diversity and Inclusion Roundtable, and a member of the Bush Foundation Fellows Selection Committee.

Carley Knox is one of those people who, despite consistently juggling many high-impact projects, is also heavily invested in creating and deepening both personal and professional relationships. In addition to her many professional achievements in the last year, she made sure to mention how excited she and her wife Cheryl are about their son Oliver successfully completing his first year of Kindergarten.

Her commitment to family is not surprising – in a lot of ways her personal values and goals overlap with her professional ones. “I’m so passionate about creating change. Whether it’s locally or nationally, we will continue fighting that fight as a family and a franchise. Our work is not done.”

One of Knox’s many vehicles for change is The President’s Circle, which is an innovative program offered by the Lynx. The President’s Circle is aimed at the “most passionate die-hard Lynx supporters who understand that this is bigger than basketball.” Knox explains, “I wanted to bring this group of people together – to bring them into the inner circle of the Lynx.” The club offers exclusive access to events, which have included advanced movie screenings, a VIP Paisley Park experience, and more. The President’s Circle has partnered with over 100 non-profits.

“From the inception of the WNBA we have always been fighting for all marginalized groups. That’s at the core of who we are as a league,” says Knox. The Lynx were one of the first professional sports teams to call attention to the Black Lives Matter movement following the murder of Philando Castille in 2016. The shirts the team wore read “Change Starts With Us” and attempted to address the complexity of American gun violence by also including the Dallas Police logo – acknowledging the mass shooting that left five officers dead and more injured.

“There was a lot of fielding of calls of upset people,” says Knox, “The age-old ‘Shut up and dribble’…but our players are human beings first and foremost. We use our voices for the voiceless.”

Knox’s journey of advocacy, activism, and professional success is not always easy. When she was first starting out she often had to fight for her place at the table. “People weren’t as accepting at the time,” she explains, “Opportunities were taken away when they found out I was a lesbian…homophobia is more blatant in men’s athletics, but it was pervasive in a different way.” Still, Knox has always believed that authenticity is the key to success. “Don’t compromise who you are,” she says, “Make sure that you’re your authentic self. It’s not worth it to change who you are for other people.”