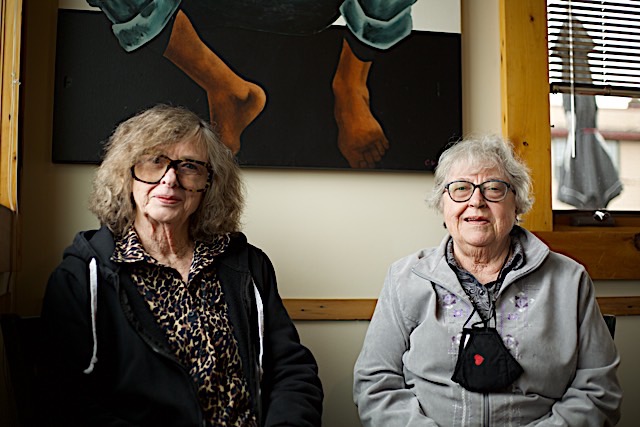 Back in 1994, Barb Neubert came to Duluth with the vision of creating a coffee shop. On East Superior Street she found a cozy venue within her budget, and here the coffee and book shop At Sara’s Table began in earnest. It wasn’t long before she met Carla Blumberg- who had moved to Duluth from Austin where she owned a restaurant of her own. Carla recognized the potential in the little shop and brought to the partnership plenty of knowledge and ambition. Her restaurant in Austin had included a garden that provided produce, and she believed she could set up a similar system for At Sara’s Table. “Farm to Fork” became a kind of slogan for the growing shop, and soon they had expanded the menu to include a full food menu. This meant a need for a new location as well, and Barb managed to find an out of business food market for sale, and together the couple bought it.

Together with the help of Holm Construction, the space was redesigned- food from grocery basements walk-in cooler was used to refurbish the front dining room, and the booths, tables, wait-station, and bookshelves were all created from salvaged lumber.

They opened their doors in 2002 and the welcoming environment and one of a kind décor made it a fixture in the Chester Park Neighborhood. Many of the younger crowd of Duluth, as well as those in the LGBTQIA community felt a sense of comfort and safety in an establishment run by a married couple who did not feel the need to hide.

The establishment has had its ups and downs in the past and has certainly been affected by the pandemic.

“The virus was very difficult.” Carla told me. “This year we are hoping to get back on track. We’ve really start to put some effort into that, and we’ve got a good team now, I think. It’s been hard on everybody, but I think we can come out of it.”

Therefore, we congratulate Barb Neubert and Carla Blumberg of At Sara’s Table Chester Creek Café on their Lavender Magazine Community Award in the Small Business category!