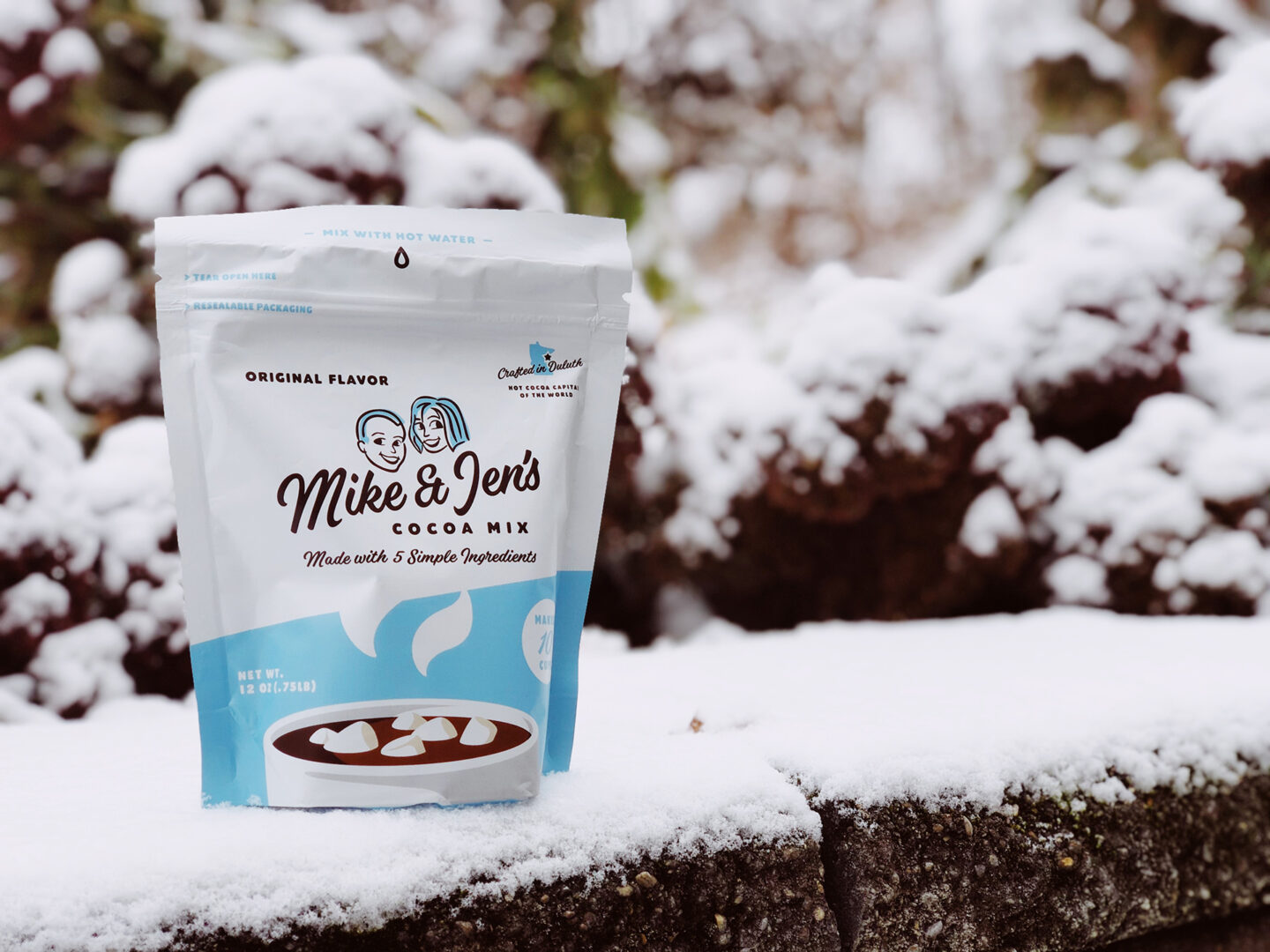 If cozying up by the fire or playing in the snow is more your speed this winter, then a nice cup of all-natural hot cocoa is a necessity. Finding a cocoa packet without a long list of unknown ingredients used to be quite the scavenger hunt, but now, in 2022, you can find one brand that’s doing it right all over the Midwest.

I caught up with Duluth’s Dean Packingham of Mike & Jen’s Cocoa, an LGBTQ-owned business based on just that – making simple yet delicious cocoa without all the unnecessary additives and chemicals used by so many others on the market. This delectable treat is made with just five ingredients: whole milk powder, pure cane sugar, confectioner’s sugar, cocoa powder, and sea salt. We talked to Dean back in 2019, but the company has exploded since then, in the best way possible.

In 2019, Mike & Jen’s was in about 300 stores and was just starting to get its foot in the door in the Twin Cities. “We had just been this Duluth company that everybody up here seemed to have kinda heard of, but it was frightening going to the Twin Cities,” Packingham says of the time. Not that many people down here knew their name, who knew what would happen next.

Well, it seemed to go swimmingly.

Now, Mike & Jen’s is in 1,000 stores and counting, and are now in all Minnesota Costco Wholesale locations, which is a huge and exciting development. Packingham says it was a very serendipitous moment when they were discovered by Costco. “One of the assistant managers at a store found us in a coffee shop and loved it and asked us if we would ever consider going into Costco. We were like…’YEAH!’” Getting into Hy-Vee was another big accomplishment of the past few years as well as spreading further east into the Great Lakes region into the Meijer chain of stores.

With success and growth of course comes challenges, and I couldn’t help but ask how the pandemic affected the hot cocoa biz. “I remember April of the pandemic and we sold one case of product. Like, one case out of everywhere,” Packingham recalls with a nostalgic chuckle. “We were panicked. We were like ‘oh my gosh, are we gonna be on the corner selling this stuff?’” But by fall, Packingham says, business was crazy. People were staying in and they wanted cocoa. Corporate gifting companies also began to reach out wanting cocoa for employee appreciation boxes and the like, and this really helped the company thrive.

Dean says this year they have made a whopping 130,000 pounds of cocoa mix, almost double what they produced last year, in part due to all those Costco orders. It was clear that he couldn’t believe this number was coming out of his mouth. Thankfully, they aren’t bagging anything by hand in the kitchen anymore; Mike & Jen’s works with a contract packager these days to get all that goodness in bags and ready to ship.

Of course, Packingham couldn’t do it all without his co-owner and best friend, Amanda Cunningham.

Cunningham has been an invaluable part of the success of Mike & Jen’s and is the peanut butter to Dean’s jelly, or, rather, the marshmallows to his cocoa. It’s just the two of them running the whole business, mind you, and they are a dream team. Cunningham fills the role of “numbers person,” as Packingham puts it. She loves to organize and forecast and do all the things that boggle his mind. “It’s really a great partnership, we’ve never fought in 20 years of working together all the time.” Once he found out she actually liked spreadsheets, the rest was history.

So, who are Mike and Jen, you ask? They are Dean’s adult children, who inspired him to make the cocoa in the first place. They can be seen once in a while helping out with events (and also on the packaging in cartoon form).

Mike & Jen’s’ biggest New Year’s resolution for 2023 is to further expand their Costco influence. This year they climbed from one to 13 stores and hope to keep that number going up. “There’s over 100 stores in the region, so to go from 13 to even, like, 50 of those would be huge,” Packingham says.

I asked Packingham if he had any advice for other LGBTQ business owners standing where he once was. “Start incrementally, and start small,” he says, and cannot stress enough the importance of cultivating relationships with other businesses. “Everybody wants you to succeed because they succeed from your product as well,” he reminds us. Those relationships and connections are what will sustain you and can lead to others.

Packingham also talks about his experience with coming out as an LGBTQ-owned business and offers some warm words of wisdom.

“As a person who came out later in life, I’ve found that, at first I was a little nervous putting LGBT on stuff. But the more I did it, the more love I got back.” He talks about how after coming out as a business he hasn’t gotten one single negative comment, despite what he may have thought. It has been only love.

Getting NGLCC certification can be a very helpful resource as well. Be proud of who you are, and spread the word!

“Be proud of it, I think that’s one of the things I’ve learned a lot about. Put it out there, and the love comes back twofold.”

Place an order or check out the “cocoa finder” on their website to support this awesome LGBTQ-owned business and experience the deliciousness for yourself!