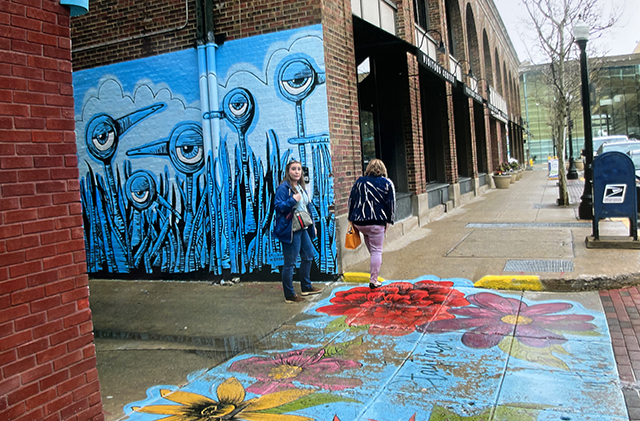 I love to visit college towns, where often the M.O. is left of normal, and Bloomington—home of Indiana University—more than fills the bill. Bonus: The stroll-worthy campus—which could double as a nature preserve—hosts two notable museums. The Estehazy serves as Art 101 with its globe-spanning collection, ranging from the Dutch Golden Age to Henry Moore; from Rodin to Picasso.

That’s the icing on the cake. What originally lured me to Bloomington is its Tibetan Mongolian

Buddhist Cultural Center—the only one in the USA, and frequently visited by the Dalai Lama himself. It was established in 1959 by his elder brother, who was invited to teach at IU. Visitors are welcome to approach the center’s glittering altars, where golden Buddha statues pose with serene smiles. Then examine intricate sand paintings composed in his honor. Spin prayer wheels. Photograph the sky-scratching stupa column outside. Linger for a picnic on the spacious grounds (admission free; tours available). To continue the experience, return to the ethnic restaurant row on campus for a bowl of dumplings in Anyetsang’s Little Tibet cafe.

You’ll find breakfast worshipers at quirky Runcible Spoon. “It’s like dining in your college professor’s home,” locals say—except my profs failed to invite me for a veggie Benedict or smoked salmon hash. My beloved Mrs. Forbes, who taught Latin at the U of M, may have preferred a jaunt to Osteria Rago, where everything Italian is homemade, from a parade of pastas to the chilly affogato coffee, standing in for dessert.

Anyone—everyone—with foodie credits will reserve a table at Elm, a sophisticated newbie in an elegantly restored grocery store. Train-style booths parked in front of the kitchen let diners spy on the cooks’ antics, or snag a seat under the soaring ceiling to explore a Beard-worthy menu. Start with an asparagus tart bathed in black hollandaise, then swerve to a side of Brussels sprouts livened with miso yuzo aioli. I swooned over my entrée of Moroccan lamb with chermoula, watercress, fennel and mint. My companion’s chicken sandwich also proved State of the Art. No room for dessert? Well, you can always squeeze in that trio of truffles.

Then, back to my room at the Graduate Hotel, which honors the city it anchors. (I slept in the Indiana songwriter Hoagy Carmichael room, overseen by the sheet music for “Stardust.”)

For more info, check www.visitbloomington.com. And visit www.lgbtq.indiana.edu  for all things LGBTQ.

Fort Wayne, in the northeast corner of the state, started life as a military outpost where three rivers joined. Today, after the ensuing years of abandonment, action has returned to the river banks via Promenade Park and its entertainment outpost, The Landing. These days, trendy restaurants, a salon, a brewery, a home store and other shopping/dining ops claim the territory.

The library also is home to the city’s famed Genealogy Center, where visitors are invited to trace their family history, thanks to world-class digital resources abetted by one-on-one help from professional genealogists. And, it’s all free!

No help needed to trace the city’s trail of murals. Grab a DIY map at the Visitors Center to spot 35 downtown walls repurposed as cheeky art. Downtown’s actual art museum specializes (by popular request) in a sparkling collection of blown glass. Even the nearby county courthouse sports dazzling glass domes (free noon-hour tours).

If, however, you consider music the primo art form, head to Sweetwater. Since its debut in 2006, it’s drawn millennial fans to live and work in the city, offering itself as “a place for music makers to gather in the world’s largest music store.” It’s the number-one online retailer in the country, spurred by demand for all breeds of musical instruments and recording devices. The operation grew from the back of founder Chuck Surack’s VW bus to become a 2,500-employee home for everything from guitars and drums to pianos, brass, and whatever else you can think of. Tours, lessons and concerts, too.

Prefer your music at a gay club? Head to Babylon, where you’re invited to dance the night away on all three levels. After Dark boasts that “every hours is happy hour”—fueled by drag shows, karaoke and dancing. Henry’s lure is its dark wood interior, “upscale but casual.”

Downtown, Indiana Artistry lures shoppers with locally-made must-haves, from bird houses to mug mats to man bags. The Palladium poses as a swell concert venue. It also houses The Great American Songbook Foundation— Michael Feinstein’s baby—which heralds the Golden Age of popular songs (“the backbone of our lives”) from 1920 to 2020. Compare versions of “Blue Skies” crooned by Ella Fitzgerald and Willie Nelson (and more) at listening stations, in the company of Vincent Minelli’s Oscar for “Gigi.”

If Carmel sounds like Edina, then neighboring Fishers is akin to Bloomington—fast-growing and entrepreneurial, as in landmark developments like the live/work/play buildings of Fishers District. (Its epicenter is RIZE, home of plus-size cinnamon buns). The Nickel Plate Trail—a former railroad track now groomed for hiking/biking—winds by the weekly Farmers Market held near Fishers’ open-air performance stage.

Lovable—OK, downright adorable—Nobleville, its neighbor, is akin to Stillwater, where history meets hipsters (called ‘hipstory’ by the creatives moving in). Its town square is anchored by an iconic wedding-cake courthouse, complete with a jail where Charles Manson once cooled his heels. Make the rounds to lunch at Rosie’s, where a line out the door attests to the quality of from-scratch diner fare. A bite or two of her famous gooey butter cookie fortifies shoppers vaulting from one antiques store to another, punctuated by alleys repurposed as lounging ops with furniture, fairy lights, murals and pop-up concerts.

Nearby, Nickel Plate Arts has drafted a Victorian homestead as arts central, featuring a gallery, studios to watch painters at their canvases, and Gal’s Guide Library, where femme titles rule. At NobleMakers, a hundred-plus artists’ works –T shirts to shaving brushes—tease your wallet. Nobleville is rumored to be hatching plans to re-enact the famous Squirrel Stampede of 1822. BYO acorns, I presume. For more info:  www.visiitHamiltonCounty.com .