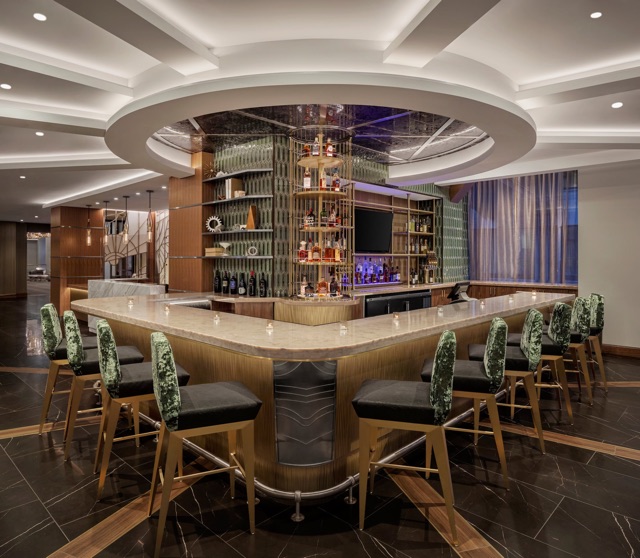 As a travel writer, I’ve done some pretty daring (and mostly stupid) things to enliven a story, but—how’s this for bravery during a crisis? I slept in a local hotel and ate.  In. Its. Restaurant.

Sadly for bragging rights but happily for self-preservation, it turned out to be as safe from COVID as I’ve been since March, because the Rand Tower Hotel at 6th & Marquette is brand-new and thus still a bit under the radar, so no crowds. More important, it also boasts mobile check-ins and a special air-quality system, meaning that the air I inhaled there was far cleaner than that on the street (or my own apartment, for that matter).

Guest rooms’ expansive windows frame downtown’s cityscape, while tones of gentle gray lend a calming vibe (unless you take advantage of the in-room espresso machine to banish sloth). There’s a well-stocked gym and a fifth floor rooftop patio for wining and dining when (if?) spring arrives.

I ambled down to the lobby’s lounge area of huge windows framing the passing parade, backed by soft jazz, and more tones of gray for dinner in the hotel’s signature restaurant, Whiskey & Soda—to eat my first meal in a long, long while which did not originate at Whole Foods or a delivery box.

Lounging on the banquette’s oversize pillows, I eavesdropped on Adam and Steve’s mini-honeymoon chatter from a neighboring (but socially-distant) table while perusing the list of—of course—whiskeys. I’m a Bourbon fan, so I went straight for one of my faves, Basil Hayden; then, as the evening progressed, a glass of another love, Buffalo Trace. If someone else is buying, do try the Papp Van Winkle 12 year ($27). I’m not so crazy about the slim choices of Irish, but the Scotch line-up fares better. 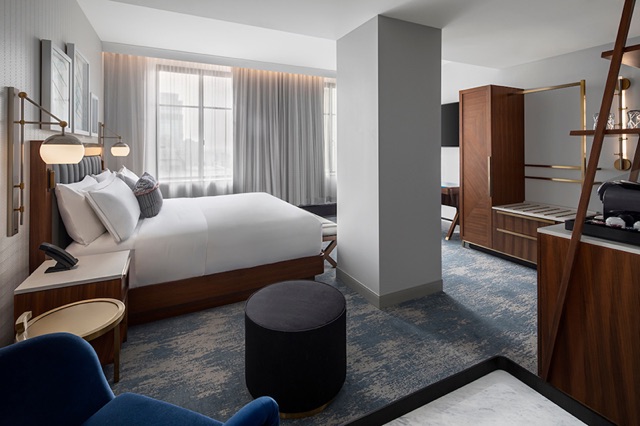 Meanwhile, Adam and Steve were enjoying their martinis.

The restaurant’s all-day menu is—wisely for now, anyway—a compact one. A generous and well-appointed board of cheeses and cured  meats could make a meal, or vote for a classic shrimp cocktail or hardly-classic but yummy banh mi sandwich. From the salad list, I opted for the chevre number ($18), a modest toss of frisee with bits of crunchy sunchokes aside fanned pear slices in a Calvados dressing.

Dine in your room if you prefer—especially for breakfast. I indulged in a decadently rich Benedict, lush with smoked salmon and eggs robed in tomato hollandaise ($21). Or choose that salmon atop a bagel ($18); omelets; or that beguiling banh mi sandwich—and more.