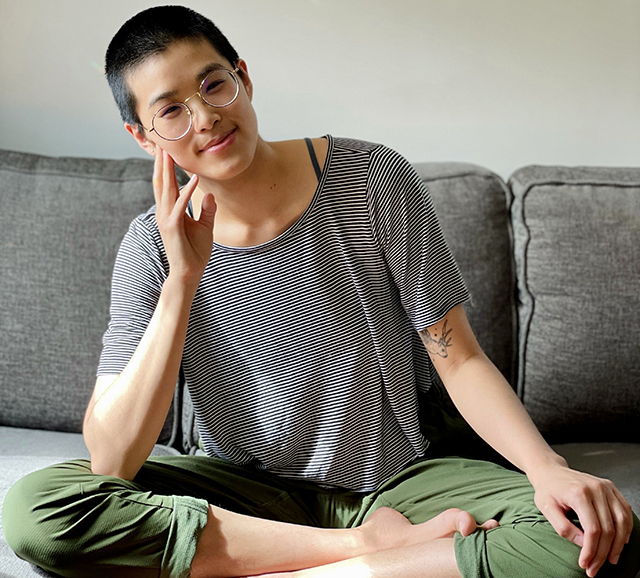 Where do you return to when no place feels like home?

This is one of many questions posed by poet Jennifer Huang in their newest collection, Return Flight, a book that travels oceans, generations and hand-me-down family legends as it journeys toward an answer.

Born in Maryland, Huang spent their earliest years in their parents’ home country of Taiwan living with their grandparents before returning to America, where they’ve lived since. “‘Where are you from?’ has always been a complicated question,” Huang explains, half-smiling from the driver’s seat of their car (an improvised Zoom interview location that Huang introduced with a self-deprecating laugh), “not just because of, I guess, the connotations of the question when it was usually asked when I was a child, but also because I never felt the places that I had been were, like, home.”

Readers of Return Flight will recognize this feeling of otherness, of an outsider searching for a place to belong, in many of the poems in this collection. Huang steps into childhood memories—sometimes the childhood memories of their relatives—juxtaposing mythological references with small, often devastatingly real glimpses into the painful experience of coming of age and reconciling one’s place in the world.

Or perhaps it might be more accurate to say that Huang’s speaker is often yearning to understand themselves fully by returning to the places they felt most authentic: “Was my greed/or desire too big to hold?/Truth is I didn’t want a man. Really,/I want to feel all of me/realize what is, what is;/my body, in existence; enough” (“Pleasure Practice”). Bodies occupy a significant amount of space in this book as well, as Huang’s speakers gently dissect previous sexual encounters and consider forgiveness for a father who often employed physical punishment. In many senses, Huang’s poems speak to the revolving feeling of trauma that continues to live with us, no matter how far we may distance ourselves from it: “I want/to let our laughter mean just that—/a laugh. The past is faraway/though sometimes it stalks close” (“On Days I Stay with My Father”).

Huang speaks about the subjects of their poems with the delicacy of someone still processing, especially when it comes to the concept of physical touch, which is used in Return Flight like a double-edged sword: sometimes a source of joy, fulfillment and freedom, other times a claustrophobic and not-so-unspoken threat. “Touch is like an unspoken contract . . . one of our first languages is through touch” Huang says. “I think why I’m so concerned about it is, if we’re thinking of touch as some kind of contract where you move energy from one body to another, it’s like, I wanna make sure I’m doing it with the most care and gentleness I can.” And on the subject of inherited, intergenerational, family trauma: “I think exploring this book is figuring out why I have that impulse, which comes from experience and family stories that were passed down, which were about touches that weren’t so gentle and were violent and seeing how that has reverberated and affected dynamics and relationships.” One of the most striking features of Huang’s voice as a poet is their ability to accurately portray the layered, heightened experience of trauma and memory, and how the past so often feels equally present in our everyday experience of life, even if that memory wasn’t originally your own.

But underneath these painful memories is a steady, unflinchingly kind, and often delightful authorial tone. And Huang themselves is a bright and candid conversationalist, laughing often when discussing the surreal experience of graduating with an MFA (from the University of Michigan Helen Zell Writers’ Program) in 2020 and having a book published less than two years later. “I wrote this book to write about the things that weren’t talked about as much when I was growing up, and to shed light on them to release the shame of it and the fear of it,” Huang recalls. “I wrote the book and I was like ‘Okay, I’m done, great!’ And then I found out the book was coming out and I felt so much shame that it was!” Sharing such painful, private experiences in their writing requires a significant degree of courage and integrity, but for an emerging, brilliant poet like Huang, those strengths are often needed moreso after publication: “It’s one thing to write it and share it with cohorts, professors and friends. Anyone has access to it now.”

Fortunately for us, Huang’s poems ring true for readers expressly because of their willingness to share the often complicated, difficult-to-pin-down yearning of the outsider, and as Huang’s speakers journey back through difficult terrain, we are often returned to a place of compassion and openness for where we might land next. “I think something I’m still thinking about is home,” Huang says, “but now more thinking about it as like community and authenticity, like self-authenticity. And building a home within the self, and also within other people that can love and support the self, that I am becoming and want to become.”

Following Jennifer Huang’s win of the 2021 Ballard Spahr Prize for Poetry, Return Flight will be available for readers from Milkweed Editions on January 18th. For ordering information, as well as more information about Jennifer Huang, visit www.huangjennifer.com