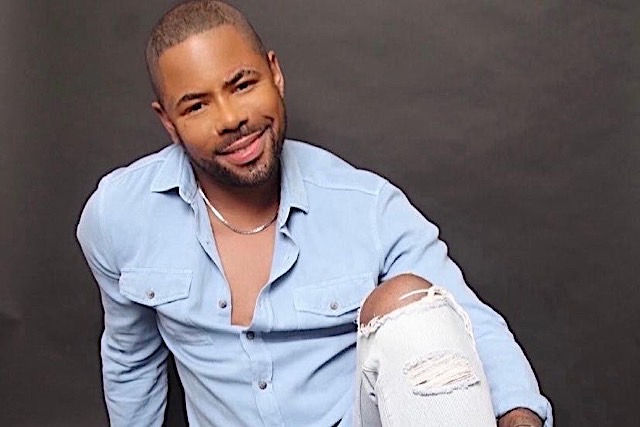 “I’m just here to get my coins and leave,” Shod Santiago proclaims, and, sure, he’s LMAO-ing as he proclaims it, but he’s also describing his profession in all of its Protean forms.  What Atlanta-based Shod Santiago is while getting those coins is hard to nail down.  He’s defined in his website’s bio as an “online sensation”–you know the type:  raconteur, endorser, influencer.  Away from the world of screens and screeds, Shad Santiago might be called a social media personality, trading in that most ephemeral and ethereal of currencies, fame.

And not just any fame, that would be hard enough–Shad Santiago deals in fame in its most ephemeral and ethereal form, the modern stuff, the trickiest, wiggliest fame, the flame-like fame that comes in like a spark and often lasts as long as a spark, Internet Fame.  Toward that end, Santiago has pursued employment in a gaggle of non-real jobs.  Of course, he has his own take on his mercurial profession.  “I describe it as being an all around artist,” he clarifies.  “I do it all–act, rap, perform, host, and provide commentary.   The list goes on and on.”  Obviously, dismissing someone with such a pedigree as merely “famous for being famous” would be a mistake.

Shod Santiago began his coins-getting by posting on that great tangler of the attention-deprived, Vine.  (In case you blinked between 2013 and 2019, Vine was a short-lived short-form video hosting service–an application, or “an app,” as the wrinkle-free say–wherein users could share looping, seven-second long clips, often toward the laudable end of inspiring LOLZ in profusion.)

In these salad days, Santiago’s brand came into sharper focus as a free-range original-flavored public persona that has since proven itself as friend-effacing as it is self-effacing, that has luxuriated in attention even while sharing it, that has valued fact and innuendo in equal measure, and that’s gift-wrapped in a ribbon-like laugh that’s as capricious as it is contagious.  “What sets me apart is I’m me!” Shad Santiago observes.  And the man is not wrong, and profoundly so.

On Vine, the future influencer provided content both sublime and ridiculous, acquiring a viewership of over one million devoted Vinees…but he soon moved on, taking his devoted fan base with him.  With them at his side, he has since delivered a more extended version of his energetic, girl-please charisma to VH1’s Love & Hip Hop Atlanta and an independent TV series Big, Beautiful Woman.

He transmuted this experience into the talk format on Strong Voice Television’s Shod Santiago Show.  According an online profile, the program “brings a fresh outlook on late night talk shows.  Shod delivers intriguing advice, and entertainment to a niche group of individuals.”  This niche, naturally enough, are consumers of social media presumably looking for a talk show to call #theirown.

A show biz career path that might resemble a frog jumping from lily pad to lily pad has given Santiago a wholly unique perspective on the meta-medium with which he’s dealt since the beginning.  “I think fame is being really well-known,” Santiago observes.  “Of course there are levels, but fame is fame, if that makes sense.  So many people have so many different definitions, but to me, it’s measured by your longevity and your ability to influence others.”

Longevity might be the most crushing metric to maintain in a digital medium where too-long phrases are reduced to acronyms and acronyms, still being too long, are replaced by emojis, but Santiago is equal to the challenge.  “Honestly, for me, there is no pressure,” he affirms.  “I’m sure other people feel pressured. However, I believe everything happens the way it’s supposed to.”

When Santiago meets his fans, friends, or followers in the real world, they’re often jarred by the difference between the personality living in their screens and the person standing in front of them.  “The most common misunderstanding [about me] is probably that people think I’m sooo rowdy and cursing people out twenty-four/seven,” Santiago laughs.  “That’s so not me. It’s crazy that people even think that. I don’t just randomly walk around cursing people out.”

If he has to battle preconceptions when personally meeting admirers, Santiago can take solace in not encountering other kinds of prejudices…probably.  “I honestly don’t feel like I battle against any stereotypes.” Santiago supposes.  “I mean, I’m sure there are a lot of stereotypes, but I legit am, like, out of the loop–I don’t pay attention to a lot of things!”

These come-to-Shad meetings can put Santiago into an appreciative state of mind.  “Just having a fan base in general is a surprise for me,” Santiago admits.  “It’s such a blessing that people love me simply for being me!  Still to this day, I’m so grateful.”  He’s getting his coin alright, but with uncounted fans demanding regular new content in multiple media, Shad Santiago doesn’t appear to be leaving anytime soon.

This is just as well:  Santiago hopes that his own success can serve as blueprint to the very fans whose existence embodies that success.  “Anything you want to do in life, career-wise, is attainable,” Shod Santiago insists.  “If you can see it in your head and it’s clear, it already happened–you just haven’t gotten there yet.”

Sharing success is for Shod Santiago a nearly-religious experience, and the more he shares the more he seems to get.  “Pray and meditate and be good to people,” he instructs.  “If you believe it, like, truly believe it, it’s already yours.  Just keep your head up.”