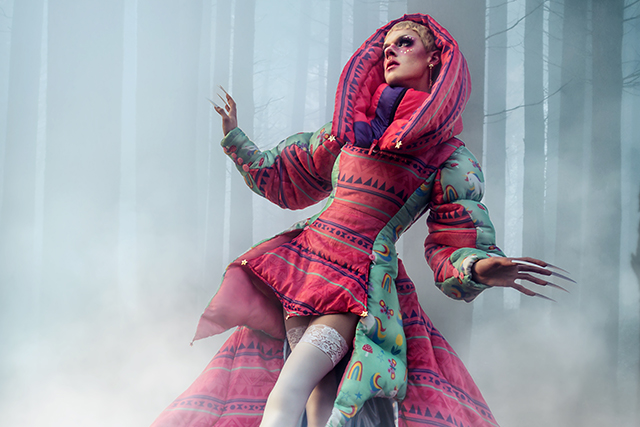 Hailing from Utica, MN (pop. 291), Utica Queen recently skyrocketed to international fame after killing it on the latest Emmy-winning season of RuPaul’s Drag Race. Ethan Mundt, otherwise known as Utica Queen, will soon be featured in a dynamic, first-of-its-kind exhibit at the Rochester Art Center. Homecoming Queen will feature a variety of Utica’s most iconic costumes—approximately 20 in-person—as well as large-scale photographs, original design sketches, and a short film on the artist’s process. For those outside the Rochester area, the exhibit will also feature a ticketed virtual experience for fashion, art and drag fans alike.

We recently had a sit-down with Utica to discuss the upcoming exhibition, post-Drag Race feeling, and

You have so many fans around the world, especially now since we’re only a few months past your debut on national television. But let’s begin by addressing the folks entering this exhibit who may be new to the drag scene. Can you tell us a bit about your entry into drag, is there someone or something that inspired you?

I grew up in a ho-dunk farm town. I’ve always been a creator, been crafting. Going on [Drag Race] was actually the first experience of me “being in the work.” I’ve been a local performer. I started off in Minneapolis with my drag career and then now moving over to Chicago. It was usually just creating and then performing on smaller stages, and, you know, showcasing these big gowns, these crazy pieces of work. But then to just be plucked from all that to showcase it on the big screen—that’s amazing.

You went to Hamline University, right?

It sounds like a natural trajectory for you into drag. Is that the same stuff that inspires you now? How has that sort of sharpened now, post-international tour, post-Drag Race? Should we expect anything different from Utica in the years to come? Is there something you’re aiming for now?

I would say that I just wanna continue the art-making. I finally got to the point in my career where I can create the things that are happening in my head. I remember, for years I would always wonder, How can I do these crazy things I’m thinking of? But now I’ve gotten to the point where, with enough training and enough validation from going on the show and with these amazing opportunities to put the work into an exhibit, that what I’m doing in my head is coming to fruition in these full-bodied stories.

There are some artists I’m inspired by. Like, I love [Wassily] Kandinsky. I love fine artists who create these bizarre shapes and these crazy little vignettes of time with their pieces. I’m also very inspired by some artist drag queens that are so, so talented—like [winner, Drag Race season eight] Sasha Velour is one of my favorite drag humans. She definitely inspired me to go for what’s happening in my head.

For your fans who maybe only know you from the small screen: we’ve heard you describe Utica Queen as “kooky” “spooky” and a “look queen.” You’ve said that you like being a lot of things at once, and you definitely have a charismatic presence that’s very high-energy, but equally welcoming. Is there a specific way you’d describe Utica Queen now, especially post-Drag Race?

You actually said a bunch of the things. Above all I love people. I love this art form. And I really am a huge fan of drag. So I want to do my best to showcase that and showcase the love that I have for this work. By being welcoming, by being kind, and to create stories on that stage and in my pieces. Ultimately, I think I’m more than a drag human, more than an artist—I’m a storyteller. I feel like drag, at its core, that’s what it’s all about: taking people out of this world for at least a few minutes. And to showcase a little bit of your heart to them, show them something more.

You really seem to light up when talking about your hometown. Now that you’re officially homecoming, how are you feeling about bringing your drag to southern MN?

Amazing. Utica is my name, and when I chose it, I wanted to pay homage to this tiny little farm town that raised me and gave me this opportunity for creative expression. It’s kind of like a thank-you, a way to bring it back home, because that’s where it all started. In a way, having my work displayed so close to home, it feels right to give back to this amazing place.

Okay, let’s talk about the show itself, and let’s start with the physical looks we’ll be seeing live. Which, we have to say, you’ve really chosen some good ones. [No spoilers, but fans of Utica are very likely to see more than one iconic costume.] Can you tell us a bit about the selection process? These looks feel like you’re really giving fans of yours exactly what we’d love to see up close.

A lot of my work lives in the realm of fantasy, an Alice in Wonderland-type of environment. Like with the [Drag Race] promo [outfit], the triple hats, the Mad Hatter references. I like to think that each one of the pieces that goes into this exhibit needs to tell a story, but also have a thread with all the other pieces in it.

Even with the pressure-cooker of Drag Race, you seem like someone with an interesting collaborative style. Do you often collaborate on looks for Utica?

I do collaborate, yes. I really believe that this art form is a community. It’s a chance to take each other’s minds and bring them together to create something. It takes a family to create this work. Doing it all alone, also, is no fun. Why would you want to, like, seclude drag to just yourself? Pull other artists in.

I got the opportunity to collaborate with [winner, Drag Race season 13] Symone, and we got to embody and showcase each other’s work. But now, of course with the bandwidth of being Utica and going around the world and performing, I’ve been trying to collaborate as much as I can. For example, I’ve collaborated with Kimorah Hall, and we have some more work coming—and I love her dearly. I got to do some duets with Denali on the [recent UK] tour. I love to be the person to kinda dip my toes into other people’s art forms and walk in their shoes a little bit.

As someone with a ton of younger fans who look up to you, do you see drag as a vehicle for kindness and advocacy?

Absolutely. Drag is all about being the best possible versions of ourselves that we can possibly imagine, and showing that version to everyone we see. This art form, it’s made to, like, fuck the patriarchy. It’s about protest and about sharing our queer stories with the rest of the world and saying that “we are here, we are valid, we are amazing artists.” And I feel like it’s finally an opportunity for us to come together as a community through our differences. I’ve been lucky enough to have a lot of peers who feel the same way I do, and I feel like we’re going to continue the vibration.

This is quite possibly the first time a drag queen has ever been featured as a visual artist in a museum format. How does it feel to be a pioneer in this space? Is this something you’d be interested in doing in different versions of the future?

Of course! I think this is so cool. Being the first of its kind, I will say, is bizarre to me. I feel like drag is such an interesting art form in itself—it’s interesting that it hasn’t really been touched on in this light before. Moving forward, I just want to keep sharing it. Like, why not put it to the forefront? I’d love to see if I can get this show to travel. I would love for as many people to see it as possible. And for it to be put in a digital format, I think that’s just so cool to have this opportunity to share with as many people as we can get. It’s inspiring. But also, along the way, bring people in to see what we can collaborate on together. This whole show is built on that collaboration of work. A lot of the costuming that I had assistance with are these amazing artists I’ve come across on my journey. Even the photos are from these amazing photographers.

Homecoming Queen will open with an evening celebration on December 4th and run through April 3rd, 2022. Additional information and tickets at rochesterartcenter.org.