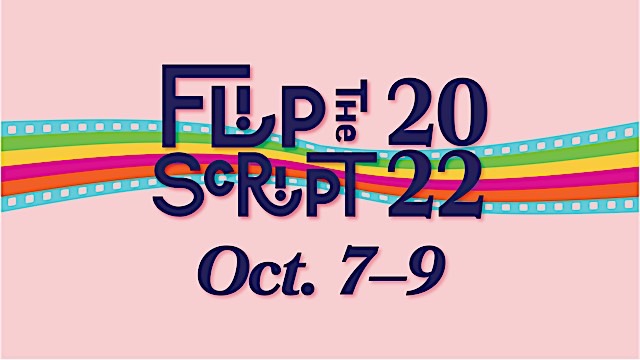 Artwork courtesy of Flip The Script

If you’re looking for a truly independent film festival focusing on LGBTQ subject matter, the Flip The Script festival is the place to be. The festival will take place at the Emagine Willow Creek theaters in Plymouth running October 7-9.

Victoria Carpenter, the CoFounder, CoDirector, and CoProgrammer of the Flip The Script Film Festival explained that “[t]he festival was started in an effort to first and foremost have more opportunities to celebrate queer films! Along with that, CoFounder Mara Emmons and myself wanted to remove barriers to access more dimensional queer representation.”

Matthew Berg, the CoDirector and CoProgrammer of the festival adds that the festival is “about taking up space and showcasing queer representation from emerging filmmakers. We’re interested in screening empowering stories that feature a wide range of queer characters.”

The festival first launched in 2020 – just as the COVID-19 Pandemic took hold on our country. “When we first launched,” explained Carpenter, “we still didn’t know that the pandemic was about to happen! We pivoted to online a few months later and celebrated a successful first year along with our community from our living rooms.”

Yet, the festival has created some opportunities for independent LGBTQ filmmakers, while creating an impact that resonates across all corners of our community. “I’d say the biggest impact on the festival from past films is the drive to program more,” Carpenter said. “Our audience has told us over and over again that they want more! Access to Queer stories has come a long way but that doesn’t mean we don’t still have a long way to go! Many of our audience members are not “film snobs” or folks that regularly attend film festivals so getting to see queer films that live outside of mainstream tropes is a special experience.”

The criteria for the festival organizers were looking for in each film, according to Carpenter, is first and foremost, quality. “’Quality’ is a big factor during our selection process,” explained Carpenter, “but that means a lot of things to me. Great cinematography? Awesome. Perfect sound quality? Fantastic! Film with $100 budget shot on a flip phone that has a wild plot that took me on a ride? Let’s show it! I’m proud that Matt and I try to balance our programming with films that are box office worthy as well as projects from first time filmmakers!”

Berg also adds, “The majority of our films are submitted by emerging filmmakers who are telling the stories that matter to them and that we don’t yet see more widely. Outside of submissions we look at films from distributors that we think fill missing elements we’d like to have, but for the most part, we know we can present a film with distribution more readily outside of the festival as well.”

What’s on the program for this year’s festival? “I truly think every film and shorts we’re showing this year shouldn’t be missed!,” said Carpenter. “Our opening night film on Friday, “Neptune Frost”, is one of the most magical, queer films I’ve ever seen- I highly suggest! Another recommendation for Saturday night you can catch Erica’s First Holy S***, which is a fantastically weird and wild ride of a film. Erica herself will be at the screening and participating in a Q&A after. Lastly, Sunday I’d say catch our shorts program, “Ooky Spooky”. It’s got one of my favorite shorts this year, “Hermanos (Sibling X)” where you get to meet Cuco, a transgender latex pirate, birthed from a mysterious bird dream!”

“We had such fantastic submissions to this year’s festival!,” adds Berg. “Every film we’ve programmed has rightfully earned its place. My Emptiness and I, is a touching coming of age drama from Adrián Silvestre, that I find very relatable to anyone working to find their place as an adult while also navigating the hellscape of dating apps. All the shorts programs are all my babies and you should meet them all! Seriously, there is something for everyone and they showcase some very talented filmmakers.”

In addition to the film festival, Carpenter and Berg added some film programs at Emagine Willow Creek that began with a PRIDE series in June. During that month, they screened various LGBTQ-themed films, such as The Adventures of Priscilla, Queen of the Desert, Moonlight, and But I’m A Cheerleader. The same series also showed last year’s Audience Choice film, No Straight Lines.

After the festival, they will continue with a monthly film series at Willow Creek called Second Sundays. That series will start November 13, 2022 with plans to screen the documentary film SIRENS.

If you’re looking for a film adventure into our culture and community, get your tickets to the Flip The Script festival soon!